A GT Daytona team in the IMSA WeatherTech Sportscar Championship, Magnus Racing is going on hiatus in 2020. As news goes, that’s not particularly interesting for anyone but the most die-hard of American endurance racing fans. But even if you’ve never even heard of IMSA, the explanation as to why is well worth a look.

It begins by saying that “it’s important to deflect attention from future plans by dwelling on the past”, before launching into a superb paragraph which you feel could be applicable to any championship:

“While I could be grateful for the excellent crew, operations, car and fun we’ve had at Magnus Racing, I’ve decided I’d rather complain about everything else,” stated Magnus Racing team principal John Potter. “Global warming, IMSA, the troops, Turn Seven, red flag endings, officials, copyrighted brick figures, you name it. Sure, we could be accountable to our own future and whether or not we want to continue, however, our 10 years of racing on our own terms have taught us that being responsible for our own actions is not on brand for many sportscar entrants, so we felt it best to follow suit.”

It then goes into a few more series-specific complaints:

“Driver rankings,” stated Potter. “I don’t have an opinion, I’m just saying ‘driver rankings.’ That seems to be all I need to do to sound like I have insight.”

Balance of Performance – a controversial topic in every championship where it gets used – also gets a mention:

“The BoP is just out of control,” stated Potter. “I can name several races, like Daytona 2016, Lime Rock 2016, Sebring 2014, when the BoP was perfect. It should have stayed just like that.

Those three are, of course, events which were won by Magnus Racing. It continued:

“The bottom line is, I’m out there racing, I know when it’s right and when it’s wrong, and it’s always wrong when we’re not on the podium. Always. The fact the series doesn’t exclusively listen to me and ignore all the other competitors, data, and some vein attempt at ‘objectivity,’ is simply inexcusable.”

Even the fans aren’t immune from the team’s disdain:

Above all, Magnus Racing team principals cite the never-ending demands of the fans, the requirements to sign autographs, and generally talking to human beings as their greatest grievance. The final straw for the team was a signature request for a T-shirt from 2014. As a result of these consistent problems in racing, and after careful consideration of 2020 and beyond, Magnus Racing will be on hiatus.

“I am grateful for all the people that made Magnus Racing what it is, and all that we accomplished together, it was hard complaining that much, and I needed a break. I guess, turns out racing is still fun, and I appreciate the opportunity I have to be in the paddock” stated Potter.

Although Magnus Racing as an outfit is on hiatus, the Magnus name will remain on the grid in 2020 thanks to a partnership with Grasser Racing, driving a Lamborghini Huracan GT3 under the name ‘GRT Magnus’. The announcement of who the drivers will be was tackled with a similarly humorous tone:

After a careful evaluation of drivers, team principal John Potter has selected John Potter as one of his drivers, with long-time teammate Andy Lally continuing in the role of “B driver.”

As press releases go, this has to be up there as one of the best. The whole thing is well worth a read if you fancy it.

Of course, Magnus Racing has a history of taking a slightly more light-hearted approach to its racing, from its offbeat Daytona live streams to the utterly superb hero cards.

If you’re in @WGI , come by in 10 minutes for one of these gems… pic.twitter.com/oGNEuvmIrU

Long may the jokes continue. 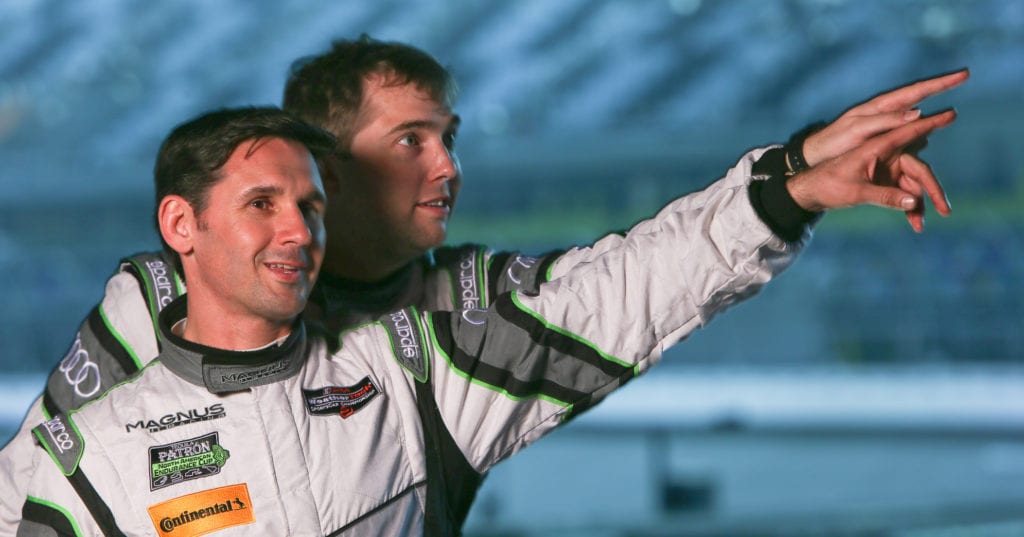