Fans had been waiting for over two years to see Daniel Ricciardo back on a podium, and to witness his signature ‘shoey’ celebration.

If you’re like us, you were delighted yesterday when Daniel Ricciardo scored his first podium with the Renault F1 team. After a bunch of 4th place finishes in recent races, it seemed like a top-three result was inevitable for Ricciardo.

Now back on the podium after what has felt like a lifetime, fans around the world eagerly awaited a special Ricciardo shoey. The post-race celebration, which quickly became iconic when Ricciardo scored podiums with Red Bull, saw him pour champagne into his sweaty race boot and drink from it. Gross, right?

So, you can imagine the disappointment when the podium ended without a single shoey in sight – unbelievable!

In this clip from F1’s social media, you can see Ricciardo talking to Lawrence Barretto who asked why he didn’t perform his signature shoey. His reaction is hilarious!

Fortunately for fans, Ricciardo soon made up for the absence of a shoey on the podium, and instead took to Instagram to share a video of him sipping champagne from his boot in his driver’s room accompanied by his latest trophy.

After Valtteri Bottas’ retirement, Ricciardo seized the opportunity and fought off Sergio Perez to take his first podium since he won the 2018 Monaco Grand Prix with Red Bull.

As well as ending a two-year absence from the finishing in the top-three, Ricciardo also gave Renault their first podium since the 2011 Malaysian Grand Prix with Nick Heidfeld.

This podium finish also means that Renault’s Managing Director Cyril Abiteboul must now get a tattoo, after placing a bet with Ricciardo earlier this season. The Frenchman promised to get inked if Ricciardo secured Renault a podium this year, and must now live up to his words.

What tattoo do you think Cyril should get? 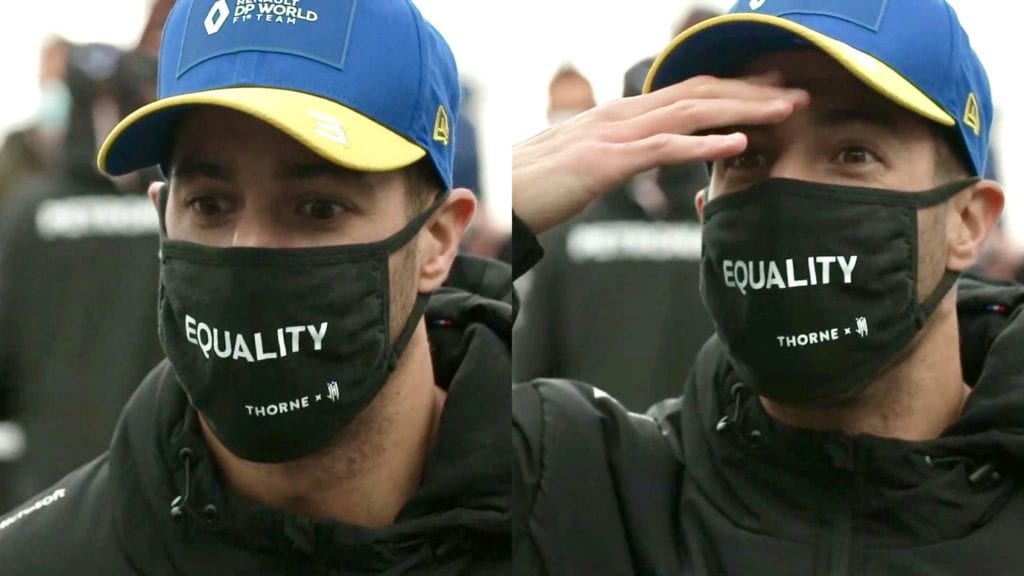