This ‘Millennial-Inspired’ Nascar Livery Is Maximum Cringe And We Absolutely Love It – WTF1
Skip to content
×
Fun , Nascar , WTF

At the end of last year, one of the sponsors of Harvick’s car, Busch beer, tweeted that if 43-year-old Harvick didn’t win the season finale at Homestead then they would create a livery for him with a distinctly millennial theme.

Harvick finished third and despite being something of a joke, Busch has actually followed through with it and created a ‘Millennial Car’, which Harvick will drive during the All-Star race on 18 May. Decked in a fetching shade of millennial pink, the livery is absolutely littered with things commonly associated with millennials.

From ‘BUSCH IS BAE 😍’ to emojis of avocado toast, it’s a treasure trove of jokes and stereotypes – there’s even a participation trophy on the side.

I still don't know what most of this stuff means. But I'll indeed be driving this "lit" #MillennialCar during the #AllStarRace. pic.twitter.com/ANs19jcDX9

We’re not quite sure if it’s an actual dig at supposed millennial culture or a well-crafted, ironic joke. But to be honest, that’s probably a good thing. We reckon it’s hilarious AF.

Huge props to Nascar teams and sponsors for consistently churning out funny and interesting one-off liveries, from Dogecoin to just the driver’s head. Keep at it! 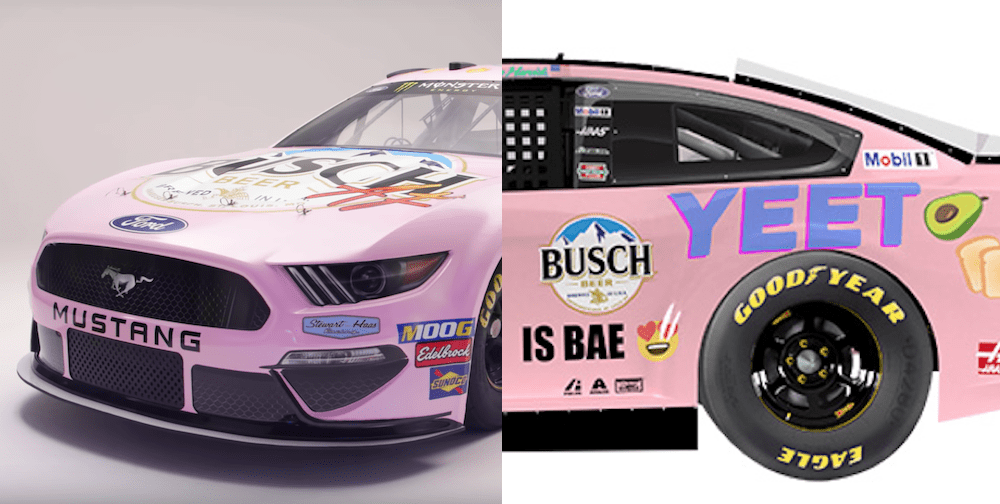