Although Porsche built a handful of road going 911 GT1s for road use – they had to in order to comply with the rules of the GT1 category – this car isn’t one of them.

Oh no, this particular 911 GT1 started out as one of the proper racing versions and it competed in the FIA GT Championship, British GT Championship and at Le Mans. But its most successful outing came during the 1998 Daytona 24 Hours, when it came home third.

But with its competition career long behind it, this owner thankfully decided to convert it for use on the road and drove it to the 75th Members’ Meeting at Goodwood earlier this year, where it and other GT1 cars were being celebrated in a demonstration run.

How amazing is that?! It’s as strange as it is awesome to see a race car being driven on the road, through sleepy towns and even into a petrol station. It’s also a great reminder of just how damn cool the GT1 category was. 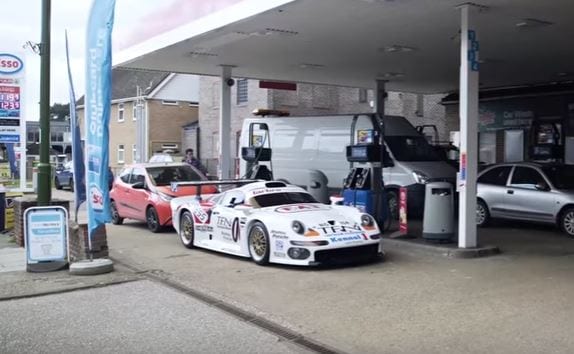