This Turbine-Powered Fan Car Could Be The Alternative Future Of Motorsport – WTF1
Skip to content
×
Design , Formula 1 , Indycar

In the late 1960s, innovation in motorsport was going through the roof. In Formula 1 you had the likes of Colin Chapman makes advances in the way racing cars were built by using the engine as a stressed member of the chassis in the Lotus 49 – a car that also introduced the legendary Cosworth DFV motor.

In 1967 and 1968, the Indy 500 was almost won by cars using a gas turbine engines (a technology Chapman later tried in F1) and in sportscar racing, Jim Hall was pioneering some wild aerodynamic devices with his Chaparrals, culminating in the bonkers Chaparral 2J fan car in 1970.

Brabham later proved the concept of the fan car and ground effect in F1 with the BT46B in 1978, but politics of the time and a desire to keep speeds in check resulted in both turbine engines and fan cars effectively being banned from pretty much all motorsport disciplines.

Keith Hylton feels the current motorsport landscape means it’s time to think about bringing back some of these banned technologies. He grew up watching the Can-Am monsters race at Laguna Seca in the late 1960s – not only did that hook him on motorsport for life, but the innovative designs brought about by a series largely free of regulations stuck with him. He sees the future of motorsport with this, the T1 Turbine concept.

Powered by a 700bhp Rolls Royce Turboshaft Turbine engine and featuring a single-speed CVT gearbox (another bit of banned F1 tech which was trialled by Williams in the early 1990s), the T1 turbine aims to provide all of the drama and excitement you expect from a racing car without the drawbacks of cost.

So, why a turbine? We asked Hylton the advantages it would offer over a normal internal combustion engine. He told WTF1:

“There are many reasons – super reliable, compact, powerful, and relatively cheap from a maintenance point of view. Their first maintenance overhaul is at 2000 hours, or about 10 seasons of racing. This should reduce the engine cost by half or more. Less cost means more teams.”

The T1 Turbine also features a complete lack of wings. This is because the car instead utilises underbody ground effect, driven by fans, in order to achieve its downforce. We all moan at F1 cars being unable to follow each other because of the dirty air effect and this is something a near total reliance on ground effect could solve. Hylton added:

“With winged cars the lead car will always have an advantage. As the wings have evolved this has become even more exaggerated. With suction as your primary source of downforce this issue goes away.

“Another the huge benefit of the fan car is that it will clean the racing surface. It’s like having 22 vacuums sucking debris and blowing it out the sides every lap so there won’t be an accumulation [of tyre marbles] like you see today. All this will allow for closer racing, better racing.”

At the moment electric power is looking increasingly like the future of motoring and, by extension, motorsport. Hylton feels this is the wrong direction, saying:

“I think cars that we drive every day are morphing into ‘transportation’. And for the planet’s sake I hope this is a good direction. I have witnessed Formula E firsthand and it does not excite the senses. We are confusing race cars with transportation and that’s where I have a problem.”

There’s more to the T1 turbine than just a collection of banned technologies, though – safety is also paramount. The bodywork, chassis and suspension are made of graphene-impregnated carbonfibre, graphene foam is used in the impact zones to cushion the driver, and there’s a small, sprung bumper at the rear to lessen the risk of wheel-to-wheel contact.

Most obviously of all, a canopy fully encloses the cockpit in the name of driver protection, a decision Keith says comes from his time as a team owner:

“In the late 90s I had a World of Outlaws team with Dave Blaney [father of Nascar driver Ryan Blaney] and we lost a driver, Kevin Gobrecht, to an accident. A piece of the car came loose in a crash and went through the roll cage, virtually the same as [Ayrton] Senna’s accident.

“Dan Wheldon was also a friend of mine, something needs to be done. Halo is certainly a step in the right direction but as we have seen it is not foolproof.”

The idea is that the car would either race in its own bespoke series or potentially become the replacement chassis in the IndyCar series, with Hylton saying there are “benefits to both”.

At the moment, the car only exists in the form of these renders by freelance automotive designer Andries van Overbeeke. But unlike many concept designs, the aim is that these designs generate enough interest for it to become feasible to actually produce a working prototype of the T1 Turbine.

As concepts go, it’s fantastic to see something a little bit alternative and the reasoning behind it – reducing costs, improving racing and advancing safety – is sound. We’d love to see a working version hit the track.

For more information on the T1 Turbine project, check out the Instagram page. 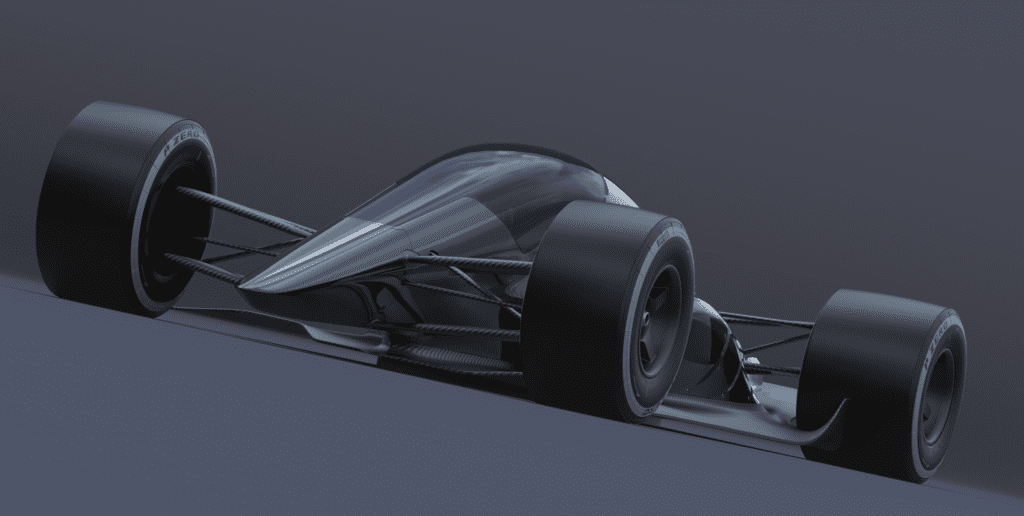