This Watch Is Inspired By Nigel Mansell’s Championship-Winning Williams

In 1985, the Williams team had a slight problem. Drivers Keke Rosberg and Nigel Mansell had helmet designs which were hard to differentiate from the front, and from a distance it was hard to read what the number on the car was. Team members and spectators were struggling to tell whether the car hurtling towards them was Rosberg or Mansell, so to differentiate the pair, Williams decided upon a simple solution – they’d paint Mansell’s number in a different colour.

‘Red 5’ was born – and whether Mansell was carrying the number in Formula 1 or IndyCar, it became a symbol of passion, aggression, and Mansell’s trademark never-give-up attitude.

Mansell had a tough start to his motorsport career, overcoming considerable injuries and a lack of money to eventually convince Lotus boss Colin Chapman to give him a chance in F1 in 1980.

By 1985, Mansell had demonstrated enough of his talents to attract the attention of Williams. That year, he won his first race on home soil at Brands Hatch and then immediately followed it up with another in South Africa. In 1986, a spectacular puncture while leading the final race in Australia cost him the championship, while a huge accident at Suzuka the ended his chances the following year during a bitter rivalry with teammate Nelson Piquet.

By this point, Mansell had already established himself as one of the most exciting drivers on the grid. His attacking, hard-charging style endeared him to fans the world over – not least at home in the UK, where the successes of ‘Our Nige’ triggered an era of Mansellmania. This was particularly evident anytime he raced at Silverstone or Brands Hatch, where his multiple victories often resulted in the fans breaking ranks and invading the circuit on the cooldown lap.

Brits love an underdog, and Mansell’s status as F1’s nearly-man in the era of Alain Prost and Ayrton Senna only served to increase his popularity. At one point it looked like he might never win a championship. But then, in 1992, he got his hands on the iconic Williams FW14B.

Resplendent in the classic blue, white, and yellow livery, Mansell used the Adrian Newey-designed car to devastating effect as he utterly trounced the field. He proved almost unbeatable as he romped to nine wins – then a record for the most in a season – and finally won the championship that he’d been chasing for years, with a points tally close to double that of second and third combined.

Mansell, the FW14B ,and Red 5 is one of the most recognisable combinations in F1 history and it makes sense that Omologato would commemorate it with this special edition ‘Heritage Racing Red’ watch. It uses the same colour scheme as the FW14B, with a blue face and bezel, yellow dials, and white number.

Well, one number isn’t white… and you don’t need us to tell you which one.

A limited edition watch, just 100 pieces are being made. So if you want one, you’d better get in there quick.

But if you miss out, or if Nigel Mansell isn’t your thing, then don’t worry. Omologato specialises in motorsport-themed watches, with nods to all sorts of teams, liveries, drivers, and eras, from Le Mans to Can-Am, and even Stirling Moss’s legendary Mille Miglia victory.

You can check out the rest of the Omologato range by clicking here. 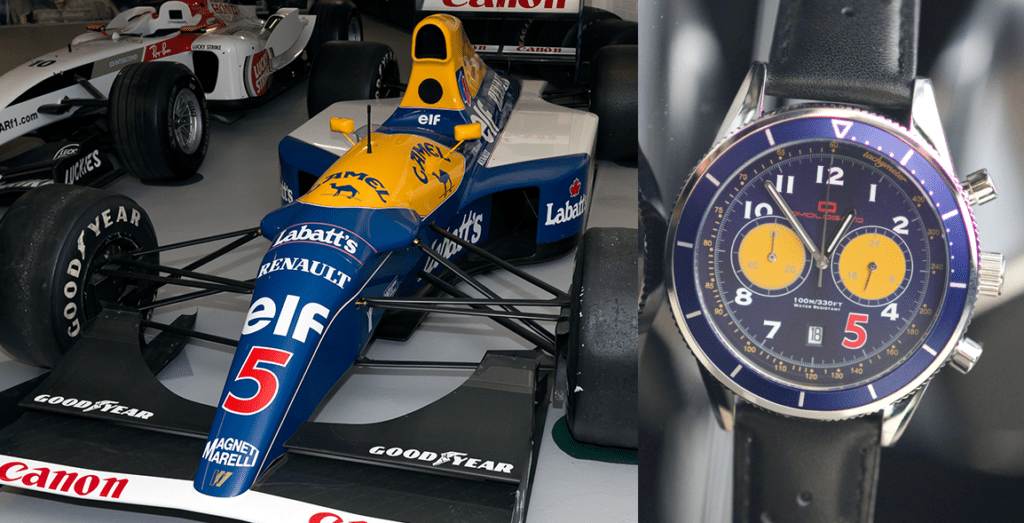