This WRC Driver Crashed Out Of Rally Australia Because He Was Distracted By A Tractor – WTF1
Skip to content
×
Rally , WTF

Rallying will always have a hint of old-school about it and strange things can occasionally happen, whether it’s animals running onto a stage or drivers getting lost in a car park.

On the first morning of Rally Australia, Hyundai driver Andreas Mikkelsen was tearing along when he came across a tractor being driven along. Thankfully, he didn’t actually hit the tractor – that could have been disastrous – but wondering what it was doing on the road during a live stage messed with his mind so much that he crashed out of the event just a few corners later.

A furious Mikkelsen explained the whole series of events and wondered how something like this could be allowed to happen:

“We were driving, there was a distance until a crest and then after there was 100 metres before a chicane. We approached the crest and we saw a marshal waving. [Co-driver] Anders [Jaeger] told me to stop but that was just before the crest so I slowed down a little bit and I saw in the chicane 100 metres away that the tractor is driving in the chicane.

“I braked for the chicane and I did the chicane and then I passed the tractor and it was still going. I said, ‘what the fuck is this, shall we stop and tell the marshals’? Anders told me to keep going but just after that there was a left over a crest, which I didn’t really get [the pace note], and then we were too fast and then we rolled.

“Wildlife you can experience, but a tractor is very surprising so I had my head in a different place. I was thinking maybe we should stop and talk to the marshals and tell them to cancel the stage in case some cars go after and they crash.

“I’m sure I will hear what happened from the team, but our rally is destroyed anyway. We just have to make sure that this never happens again because it is a dangerous situation. Animals you can’t control, that is fine, it is part of rallying. But these things you can.”

It turns out the tractor had entered the stage without permission of the organisers to go and move some of the bales in the chicane that had been dislodged by another car.

Course vehicles being a bit too keen to go and help with an incident? That reminds us of something… 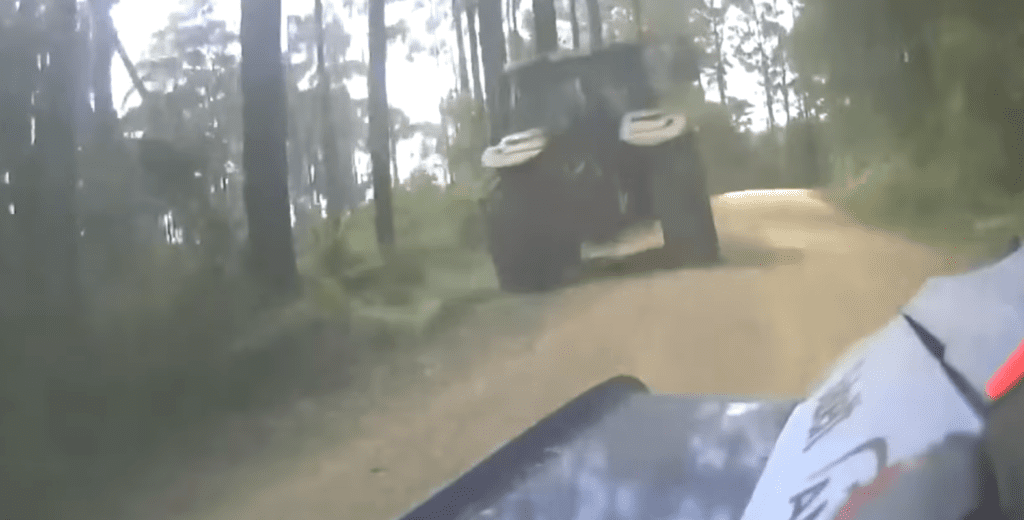