The Indy 500 gets all the headlines (and rightly so – it’s bloody epic) but when it comes to outrageously close finishes, look no further than the Freedom 100 – the support race run by the Indy Lights championship.

This year’s race was no exception as Oliver Asker and Ryan Norman did battle for the win. Coming onto the pit straight for the final time, Askew got a run on Norman to pip him at the line by just 0.0067 seconds (yes, that is the correct number of zeroes!)

WHAT A FINISH to the #Freedom100! #MustBeMay

.007 seconds is the margin of victory. Oliver Askew passed Ryan Norman on the final stretch at @IMS! Join us for more #CarbDay coverage on @NBCSN: https://t.co/5pnN5buVvR pic.twitter.com/Fsm4iKqIaQ

Even more amazing is that fact that it was only the fourth closest finish in Freedom 100 history – in 2016 the gap was just 0.0022 seconds, although its the incredible four-wide finish of 2013 that sticks in the memory.

In this year’s race, there was another amazing moment when Toby Sowery nudged the back of Robert Megennis. Usually, this would result in at least one car ending up in the wall, but a well-timed nudge from Sowery helped Megennis back around agains and they carried on their way. Megennis ended up eighth while Sowery finished fourth.

An unbelievable save indeed – from both drivers! 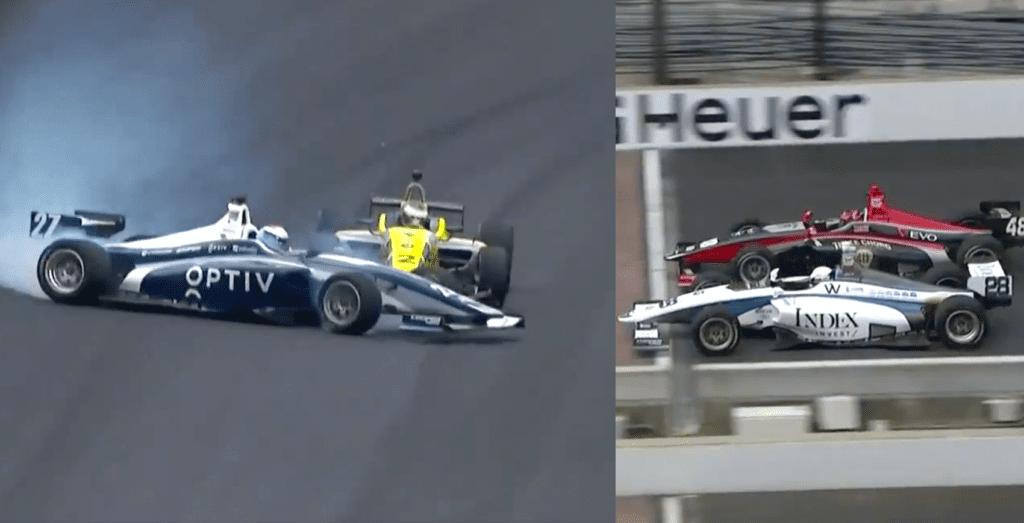