The Arca Racing Series works sort of like a feeder series for Nascar, and just like pretty much every other feeder series around the world it can make for some seriously entertaining racing.

A recent round at Road America saw the race end with a one lap dash to the flag, and it was exactly as chaotic as you’d imagine. Austin Cindric had dominated the race and led at the restart, but when he was speared off the track by Cole Custer at turn one the race was thrown wide open.

The collision left Dalton Sergeant in the lead, but he ran wide at turn five after hitting a damp spot. That should have allowed Matt Tifft into the lead but he too ran wide and hit Sergeant’s car.

At this point, series leader Austin Theriault took the lead and managed to stay there until the end as a recovering Sergeant tried desperately to salvage second place, only to end up losing third to veteran driver P.J. Jones before being penalised for jumping the restart. 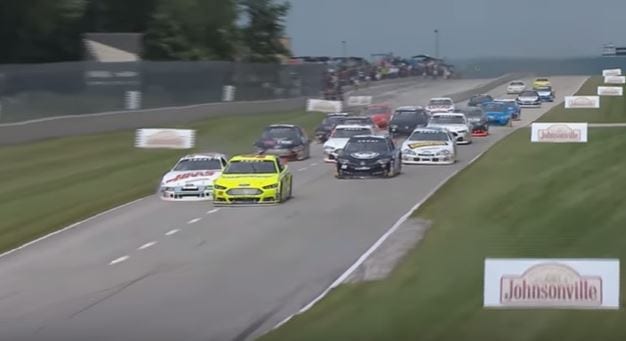