There’s a lot to like about the DTM: the cars are fast, there are tons of talented drivers, and the racing is often excellent. However, sometimes it can score a bit of an own goal – and today appears to have been one of those days.

Things unravelled following a late safety car period to recover Timo Glock’s stricken BMW. Pole-sitter Dani Juncadella had led pretty much the whole race and retained the lead at the restart, only to be given a penalty for accelerating too soon.

With a time penalty incoming, that left Audi drivers Mike Rockenfeller, Nico Müller and René Rast poised to take a one-two-three. But with Rast being the only one of the three in with a shout of winning the championship, both Rockenfeller and Müller pulled aside in the final two corners, allowing Rast to win. It was a case of team orders to the extreme – why does it always happen at this circuit!?

It made something of a mockery of the rest of the race. With only three manufacturers, team orders are something you almost have to accept with the DTM. However the team orders, combined with Juncadella’s penalty, left something of a sour taste in many people’s mouths. Several drivers – both from the DTM and other series – took to Twitter to make their feelings known.

Fully agree with you! In my view (just behind him) don’t see any mistake he did! A shame for a guy who did a great race!

WTF was that @DTM ?? What did @dani_juncadella do wrong at the restart? Come on, he deserved more than anyone that win. 😡

You are the real winner

How can @DTM be one of the most entertaining series on earth, but at the same time be so fake? A penalty for Dani for no reason, and then the audi games on the last corner… sorry for you my friend @dani_juncadella

So a restart at it's best but a penalty for the leader??? Still can't get my head round this one. I don't know the intricacies of the rule but can't see much wrong. @dani_juncadella https://t.co/1Paq5ME4zO

Unsurprisingly, fans weren’t especially happy with the way the race finished, either.

When it’s at the best so why got @dani_juncadella a drive through penalty? #DTM is a joke another good reason to leave this Audi platform 👎🏻😡

Shame on you DTM, what a race until the end. Team orders ruins the sport, what a shame DTM!!

Well, my condolences to you if you really think that it`s racing & even great racing 😏👎

Too much Team Order…
Really too much!

That's the worst thing I've ever seen in motor racing. What the hell is that shit?

After the race a resigned Juncadella hit out at the series, saying:

“This is such a strong championship which is destroyed by such small things – it’s digging its own grave. To have such a great day spoiled by something like this is annoying, but I’m not going to let it get into my head.

“It’s nice to hear a lot of comments from other guys, other manufacturers, who don’t agree with the situation. I’m taking all the positive stuff – I’m not fighting for the championship so who cares about the points? I just missing going on the podium and spraying champagne on everybody around!”

Hey, at least he got some sort of trophy…

Unacceptable move at that restart. One year ban minimun… pic.twitter.com/eX32Kn3d8l 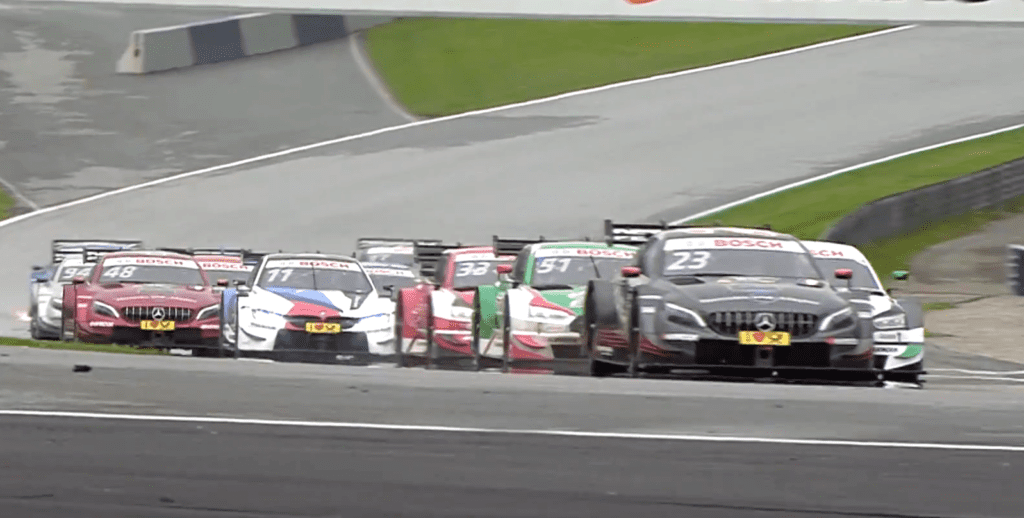