Taking a look at Gilles Villeneuve‘s Wiki page, you probably wonder what all the fuss is about. 6 wins? Ralf Schumacher had 6 wins, so what? But when you sit down and watch some of his best moments, you realise that stats mean nothing. Power-sliding round corners, racing with three wheels, Gilles Villeneuve was simply awesome.

Never has a driver raced with so much heart, and for that reason, he’ll never be forgotten. 30 years since his death here’s a look at ten of Gilles’ most kick-ass moments.

What do you race before getting into single-seaters? Go-Kart’s, maybe even saloon car racing? Well Gilles Villeneuve started his career… snow-mobile racing.

He had a very successful career in snow-mobiles, winning many events across the world. After winning the 1974 World Championship Snowmobile Derby, he began to receive money from appearances as well as race earnings. This helped Villeneuve earn enough money to fund the early days of his motor-racing career.

While Gilles Villeneuve will always be remembered as a Ferrari driver, he actually made his debut with McLaren at the British Grand Prix in 1977. After impressing in lower Formula, McLaren ran three cars at Silverstone to accommodate Villeneuve. On his Qualifying debut he took an impressive 9th despite being in the old McLaren M23. He had qualified ahead of team-mate Jochen Mass who was driving the newer M26 in his 56th Grand Prix.

In the race, Villeneuve finished 11th after being delayed for two laps with a faulty temperature gauge. He did however set the 5th fastest lap and the press were quick to label him as a future World Champion.

1978 was Villeneuve’s first full year in Formula One and the final race of the season was at his home Grand Prix in Montreal, a circuit that would later be named after him.  Villeneuve lined up a season best third but lost a place to Jones who made an impressive start going from 5th to 2nd. Jones later suffered a puncture, propelling Villeneuve into a podium place.

Villeneuve passed Scheckter for second, to the delight of the crowd, but more delight was to come when race-leader Jarier retired with an oil leak on lap 49 of 70. This gave Villeneuve his first Grand Prix win and of all the places for it to come, it was his home race in Canada.

Being part of the greatest battle in F1 history

You can’t really call yourself an F1 fan until you’ve seen this video, considered by many to be the greatest bit of Grand Prix racing ever seen. In 1979, Villeneuve was having a much more competitive season than previous years and at the French Grand Prix was fighting with Renault’s René Arnoux for second place.

With just a few laps to go Villeneuve and Arnoux exchanged places and on the final lap we saw what can only be described as ‘epic’. Going into the first corner Arnoux made his move but Villeneuve would not give up, staying side by side, even banging wheels at some points. Arnoux passed but at the very next corner Villeneuve put a banzai move up the inside and made it stick.

Villeneuve crossed the line to take second, beating Arnoux by just 0.24 seconds. Who won the race? It doesn’t even matter.

In the 1979 Dutch Grand Prix, Villeneuve was looking for a good result to keep his title chances alive. While running 2nd, his tyre exploded on the pit-straight, causing him to spin off the circuit. Villeneuve found reverse gear and got back onto the track, covering it with mud and dirt. In one of the craziest laps in F1 history, Villeneuve continued round trying to get back to the pits.

Unsurprisingly, driving on three wheels didn’t do the car much good and the rear suspension ended up completely destroyed. With the car falling apart, Villeneuve was essentially driving on two wheels as the right front was in the air for most of the lap. Determination or stupidity? You can decide.

Lapping 11 seconds quicker than anyone else 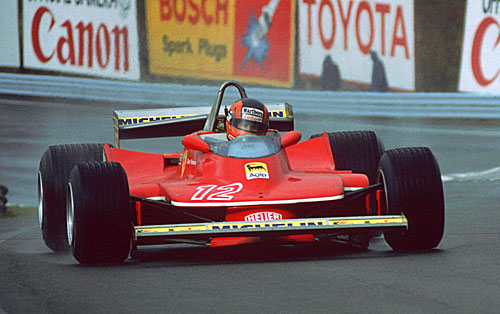 The final race of the 1979 season was the United States Grand Prix at Watkins Glen and at this point, team-mate Jody Scheckter had already taken the World Championship. Friday practice was held in extremely wet conditions and Villeneuve went fastest. Looking back at great F1 laps we think of Senna, qualifying a whole second quicker than team-mate Prost at Monaco. Well Villeneuve trounced that.

At the end of the session he posted a lap that was an astonishing 11 seconds faster than the entire field. 11 SECONDS!  Scheckter was second, who said “I scared myself rigid that day. I thought I had to be quickest. Then I saw Gilles’s time and I still don’t really understand how it was possible. Eleven seconds!”

Causing a pile up, then carrying on

Villeneuve was running fourth at the 1981 British Grand Prix when he misjudged the tricky Woodcote Chicane, he spun and collected the Williams of Alan Jones and Andrea de Cesaris’s McLaren with him. With all three cars destroyed and stuck in the catch fencing, Jones and de Cesaris jumped out of their cars… but not Villeneuve.

In true Gilles Villeneuve fashion he carried on with a broken front and rear wing. However, at the end of the next straight he retired with a puncture.

The 1981 Canadian Grand Prix was held in abysmal conditions, with visibility at a minimum. Running in a podium position at the time, Villeneuve’s wing came lose, obscuring his view further. Other drivers at this point would either retire or come into the pits, but this is Gilles Villeneuve we’re talking about.

For two whole laps he continued to drive flat-out, wrestling his Ferrari around the slippery Montreal circuit. Going into the hairpin, the wing finally broke off and Villeneuve continued, wingless, to take a podium in his last Canadian Grand Prix.

Now for one of Villeneuve’s best off-track moments. During the 1981 season, Ferrari held a publicity stunt in Italy where Villeneuve in his Ferrari 126 raced against the Italian Air Force F104 Jetfighter.

Holding off faster cars for 60 laps

Villeneuve’s final Grand Prix win is considered by many to be his most impressive and it came at the Spanish Grand Prix in 1981. He had Qualified his under-performing Ferrari an impressive 7th, while his team-mate Pironi could only manage 13th.

At the start Villeneuve made an incredible start, with his two left wheels on the grass he made up four places to take 3rd and by the start of the second lap he had taken Reutemann for 2nd place. Jones led the race until he made an error on lap 14, handing the lead to Villeneuve.

So Villeneuve had over 60 laps to hold the lead in his Ferrari with Reutemann close behind. Watson, Laffite and de Angelis would catch them both making it a five-way battle for the lead. Villeneuve drove brilliantly, using the brake and throttle tactically to stay ahead of the faster cars behind. As the chequered flag fell, all five cars crossed the line just 1.24 seconds apart making it the second closest race in F1 history.