The 1955 Mercedes W196. The 1988 McLaren MP4/4. The 2002 Ferrari F2002. The 2014 Mercedes W05. When you look at some of the cars that have achieved four or more consecutive one-two finishes over the years, you might as well be looking at a list of of the greatest F1 cars in history. The Mercedes W10 joined that group in Baku as Valtteri Bottas and Lewis Hamilton took the team’s fourth one-two in a row and yet despite that success, Toto Wolff is refusing to get ahead of himself.

It’s a pattern that’s been going on since pre-season testing, when Ferrari was painted as the favourite. The same happened again following Mercedes’ shock dominance in Melbourne and similar noises have been coming from the team ever since. Even though the team already has the same points tally as Ferrari and Red Bull combined, Wolff still feels the Scuderia is a big threat, telling Racer:

“What can I say? We are not talking ourselves down. It is that we see a strong Ferrari on Friday and on Saturday – and I still believe that Charles [Leclerc] was probably the fastest man on track today but, like in Bahrain, it didn’t come together.

“I think that what we did in the first races was put all the things together. The team didn’t do any mistakes, the strategy calls were right, the drivers didn’t put a foot wrong, and that made us win the first four races. Then when you look at the other side, they had more problems.”

He added that the first four races have “flattered” Mercedes as Ferrari looked like the the best package in two of the races, which… well, is partly true. Bahrain was definitely a missed opportunity as a combination of unreliability and driver error cost Ferrari dear, but Australia and China were very firmly Mercedes tracks, and Baku? Even without Leclerc’s error, it’s hard to see him having had enough of an advantage over Bottas and Hamilton to win the race easily – even if he had taken pole – because Ferrari’s Q2 strategy of starting on the medium tyres didn’t appear to be the right one.

And, as the closing stages of the race showed, when the track got cooler, the W10 seemed to have a few tenths in hand over the SF90. Wolff’s reasoning is that whoever has the fastest car at a given moment is being dictated by who can get the tyres in the right window of performance, adding:

“Remember [FP3] where we were 1.6 seconds off the pace? We didn’t do anything different, we just didn’t have the tire in the right window. Then it was about seeking the right compromise between qualifying and the race. Even today [Max] Verstappen was the quickest guy on track at the end, [then came the] Virtual Safety Car and the tyre doesn’t come back – he’s struggling to put heat into the tire and generate grip.

“So it is also about adaptability – the team that learns quickest to understand the new circumstances.”

It’s a fair observation, and probably a true one at that. However, Bahrain aside, the fact is that Mercedes is the team getting it right more often than not. That could be down to adaptability or certain circuit characteristics, or it could be because th W10 simply has a wider operating window than the seemingly peaky SF90. Would that in itself not suggest that Mercedes has the best car?

Even if Wolff won’t admit it, that’s what his counterpart thinks, with Ferrari team principal Mattia Binotto – if only slightly. He told Racer:

“Certainly they’ve got a slightly better car. I think that the gap is not so big and the points of the result are not reflecting the true potential of the cars. In the race today, yes, we weren’t as fast as them, but we didn’t finish 20 seconds behind.”

Mercedes has traditionally liked to play up the strengths of its rivals and when things have been as evenly matched as they were over the last couple of years, then that makes sense. From a PR standpoint, if you position yourself as the underdog and then win, your achievement seems all the more impressive.

Wolff is probably right when he says that Ferrari does have a car capable of winning races and dominating weekends. But as a package – car, team, operations, even drivers – it’s clear that Mercedes has the upper hand. There’s only so long the team can continue to play up the chances of its rivals though, because when the results are saying Mercedes is breaking records of dominance but the team is saying the battle is closer than it looks, well, it’s a stance that’s going to wear out it’s welcome rather quickly. 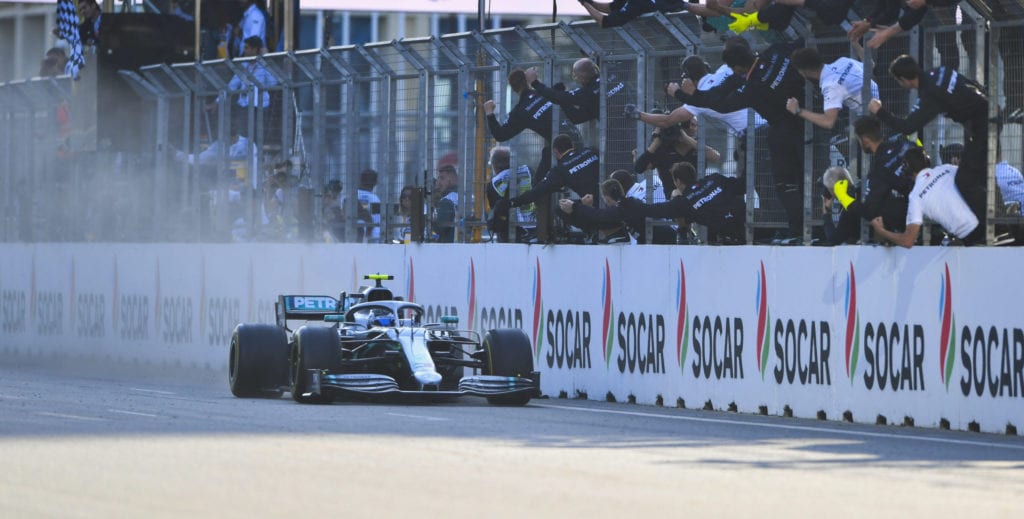