Toto Wolff and Lewis Hamilton have one of the best relationships in the paddock. It’s less of a boss and employee relationship and more like two mates on top of the world. We’re a bit jealous, actually!

Lewis signed for another two years with Mercedes over the Austrian Grand Prix weekend and will stay with the team until 2023. Before this season, though, many people were convinced that 2021 would be Lewis’s final year in the sport because he only had a one-year deal. But that’s been completely put to bed, and now Toto has said he thinks Hamilton’s departure from F1 could be even further away.

“I’m pretty sure it’s not his last contract,” Wolff told F1. ” I think he always flirts with the thought that this may be the last contract, and in a way, it keeps the options open for the mind. But no, it’s not gonna be his last.”

How it started: How it's going: pic.twitter.com/FjYyMCWT1z

Lewis has been with the Mercedes F1 team since 2013, and in that time, he’s won six drivers titles and helped the team win the constructor’ championship seven consecutive times.

Talking about the new contract, Toto said that “two years is a good time because we are in the early stages of the 2021 season”.

“It’s two and a half years. Big regulatory change next year and stability is important. His experience, speed, having that in the team is clearly a great asset.”

Toto and Lewis both joined the team at the same time in 2013, and now their contracts are in line with each other.

“Yes, we have established such a strong bond also because we have had difficult times with each other, and we went through this, so it’s basically a transparent relationship. But above all, it’s about performance. He wouldn’t want to be in a car that seems to underperform, and we wouldn’t want to have a driver that isn’t keen anymore.

“I think we have great plans for the future, we have a tough battle this year, but we are super motivated that this partnership is set to continue, and there is more success yet to come.”

We’re big fans of more Lewis in F1, he’s still on the top of his game, and Fernando Alonso and Kimi Raikkonen are proving age is just a number. Here’s to many more years of Lewis.

But now, for Mercedes, the questions are now about Lewis’s teammate. Valtteri Bottas has never had the luxury of a multi-year deal like Lewis has, and now George Russell is performing better than ever. No one knows who they’ll sign, but these next races are crucial.

“We already said that we are going to look at the next races, and we are right in there,” Toto continued. “Valtteri is informed about every single step. We asked him if it was fine to announce Lewis’s contact, and he said, ‘Well, I don’t effing care.’ It’s all good. We want to come to a decision over the summer.” 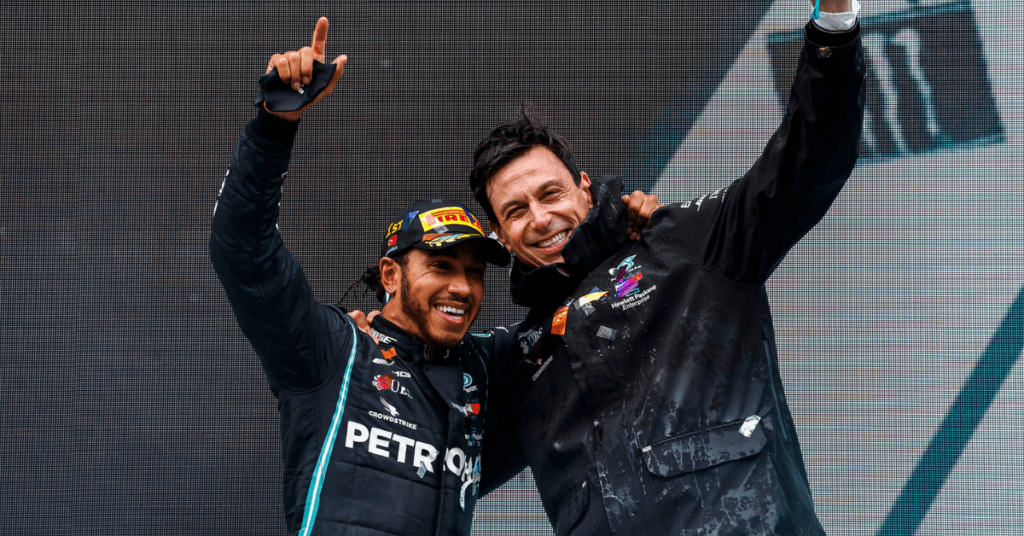