After Toyota agonisingly missed out on the 2016 Le Mans crown, the Japanese manufacturer was hoping for a lucky break and better fortunes at the Circuit de la Sarthe this year.

But, it proved to be another disappointing race, with two of its LMP1 cars retiring overnight with reliability issues and the third coming back from early problems to finish ninth overall, second in class.

Following yet another loss in 2017, with the No.2 Porsche taking victory, Toyota’s president Akio Toyoda released the following statement, apologising to the fans, the team and its drivers. Here it is in full:

“Sorry we weren’t able to let you drive all out.”

Normally, it would be proper to start off with words of appreciation for the support provided to us by our fans. However, for this time at Le Mans, I think I must first direct my opening words to our drivers
.
To me, at Le Mans for the first time, our drivers said, “We want you up together with us at the center of the podium,” “For that, we definitely don’t want to lose,” and “So fight together with us.”

In return, I said: “Drive all out. Trust the cars the mechanics readied for you. Enjoy Le Mans.”

Despite telling them such, I was not able to allow them to drive all out. This, I truly regret.

Even though our drivers drove believing in our cars, I can only say how sorry and how full of regret I am.

I believe that the Toyota engineers, mechanics and parts suppliers, who built our cars for this battle, all feel the same.

Therefore, bearing the burden as a representative of all such people, please let me say once again: “Sorry we weren’t able to let you drive all out.”

Also, to all the people related to the Toyota team, including our nine drivers, I would like to share two things on my mind at this moment.

The first is for our fans.

To all the fans who supported us believing in victory for Toyota, I am truly sorry that we were not able to meet your expectations.

And for believing in us and giving us your passionate support for 24 hours all the way to the end, I want to express my deepest appreciation. Thank you. Thank you all so very much.

Once again, Toyota will strive for the day on which we can, together, have smiles on our faces.

The second is for the Porsche team.

After last year’s battle, I happily received many comments from people at Porsche recognizing us as a rival.

To live up to having been called a “rival” I had thought that what we needed to do this year was to again put up a brilliant fight that would captivate the fans.

That is why the team was able to take up bold challenges that resulted in new technologies and skills.

To the Porsche team, I say congratulations. And I also say thank you very much.

In the end, however, Toyota was not able to put up the kind of fight that could captivate the fans, like it did last year.

This time, both Porsche and we, Toyota, were not able to complete without incident 24 hours of driving in the hybrid cars that we put to the challenge on the roads of Le Mans.

Both even winning car No. 2 and our car No. 8, which completed the race, were forced to undergo time-consuming, trouble-caused repairs, before struggling to cross the finish line.

While the hybrid technology that has advanced through competition in the FIA World Endurance Championship puts its abilities on display in six-hour races, it might be that it is not yet ready for the long distance of the 24 Hours of Le Mans.

The power of electricity is absolutely necessary for cars take on a more-emotional presence.

Le Mans is a precious laboratory in which we can continue to take up the challenges related to the technologies involved, putting such technologies to the test in an extreme environment.

We will hone our technologies even further and ripen them to provide our customers with technologies that will truly make them smile. And we, Toyota, will go on making effort after effort so that we can continue making ever-better cars.

We invite you to look forward to what we will be able to achieve. Thank you.

Quite a lengthy statement, but undoubtedly an important one after such a disastrous race. 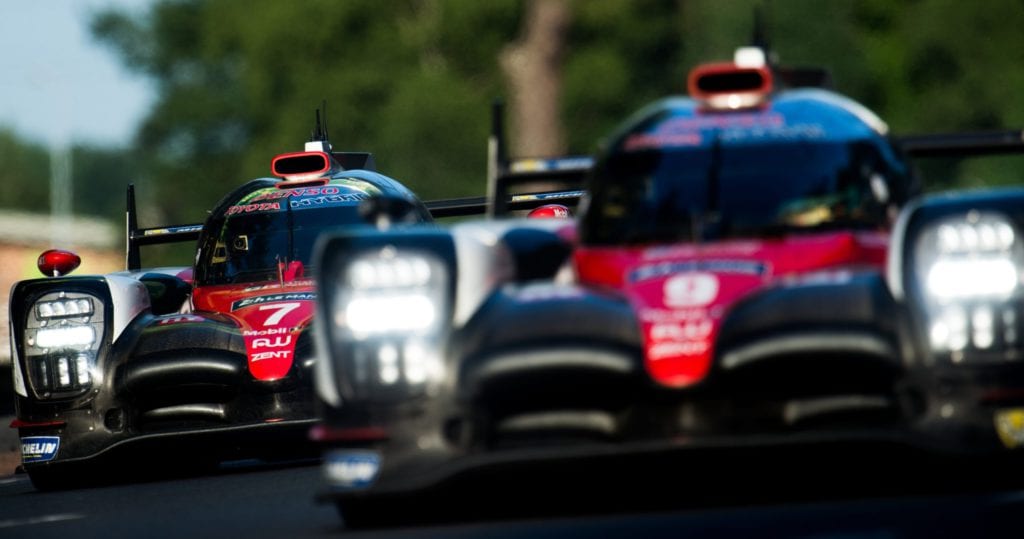