Mercedes looked simply untouchable all session long, especially once they cranked up the engines from Q2 onwards. Though he ended the session just a tenth slower than his teammate, Valtteri Bottas simply didn’t look to have the pace to really threaten Hamilton, whose pole time of a 1:13.447 was a massive 1.1 seconds faster than Max Verstappen’s pole time from last year.

In fact, you could say it’s a Mercedes one-two-three-four as row two on the grid is all pink. Lance Stroll plonked his Racing Point third on the grid ahead of a slightly ragged-looking Sergio Perez. Even more impressively, the team had such a pace advantage over everyone (well, except Mercedes) that they could get through Q2 using the medium compound tyres.

Ferrari might be able to permit themselves a bit of a smile as Sebastian Vettel headed Charles Leclerc for fifth and sixth on a circuit where the SF1000’s draggy aero and power deficiency doesn’t hold them back too badly.

Less happy will be Red Bull. On a circuit where they were so strong last year and after looking reasonable in Austria, both drivers struggled with what looked like a very difficult car to drive. Verstappen might have been able to mix it with the Ferraris but for small engine issue which appeared to develop in Q3, but Alex Albon had it even worse. Unhappy with his car’s handling, he struggled to a lowly 13th and let his frustration slip afterwards, criticising his team for sending him out in traffic.

However, the good news story of the session had to be Williams. George Russell qualified a superb 12th in the wet last weekend, but this weekend he managed to match that result in the dry – yes, a Williams actually outqualified a Red Bull. Williams’ progress was highlighted even more as Nicholas Latifi also managed to make it into Q2, the first time the team has managed it since the 2018 Italian GP.

While Williams is becoming less associated with a Q1 exit, two teams are finding it rather more familiar – both Haas drivers and both Alfa Romeos never really looked like escaping the first part of the session and will have a long job ahead of them in the race to try and progress.

It’s looking incredibly unlikely that anything other than reliability is going to beat Mercedes in the race, and considering that he’s won here seven times already, it’s hard to look past Hamilton for adding a record-equalling eighth victory. The Racing Point drivers should be left to fight it out amongst themselves for the final spot on the podium, but expect another unbelievable midfield scrap.

Of course, all this is assuming that the weather stays dry for the race… 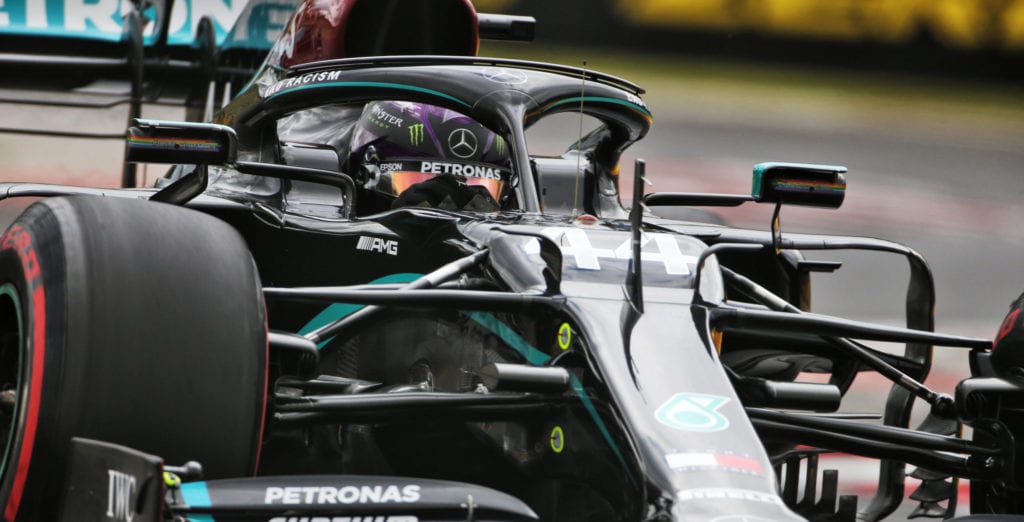