It was another unusual session in Bahrain this afternoon, with a big crash from Alex Albon and then a stray dog on the track causing two separate red flags in quick succession.

Albon, who ran too wide on the final corner before picking up dirt and slamming his Red Bull into a wall, was able to walk away shaken in the nasty crash.

However, it was a certain four-legged friend who caught everyone’s attention during Friday’s running.

A local stay dog, who looked super happy when dashing around the Bahrain International Circuit, ran out onto the track and as a result, the session was red-flagged until it was cleared.

Drivers and teams alike were quick to comment on the trouble maker, with Hamilton jumping on the radio to clarify it wasn’t his beloved Roscoe who had escaped.

We’re a sucker for a good pun, and the F1 community did us proud. Here are some of our ‘ulti-mutt’ favourites!

Is that Barkus Ericsson and Spaniel Ricciardo? 😂

Do you know where that dog went after if finished it’s lap around the track?

FP2 comes to a close and it was a pretty ruff end to the session with two red flags and a 🐕 on track.

Here are the top five at the flag…

27 seconds of action and that track has gone back to 🚩

*Googles how to bring a dog home from Bahrain* pic.twitter.com/kxdffKLFng

What if we create a championship only for dogs? 🐶 #BahrainGP pic.twitter.com/3JlKMDBDf3

Sebastian Vettel even started signing ‘who let the dogs out’ on team radio, whilst also talking about his own dog Bruno.

“If I had known dogs were allowed, I would have brought mine,” Vettel continued, “but he is in quarantine so it wouldn’t have worked out”. 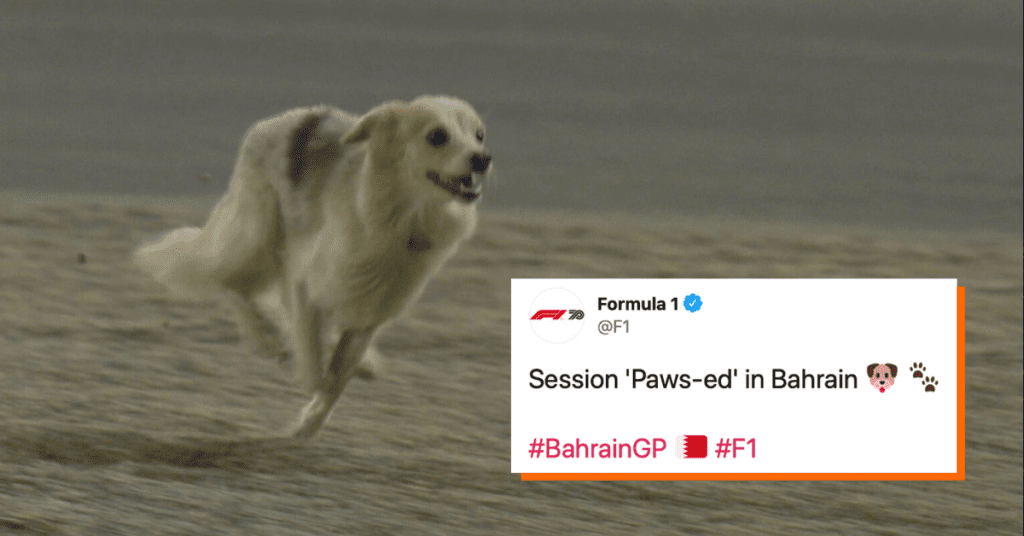