Two IMSA Drivers Made Epic Saves Only To End Up Crashing Into Each Other – WTF1
Skip to content
×
Crash , Endurance

The IMSA WeatherTech SportsCar Championship held one of its most prestigious races this weekend, the 6 Hours of Watkins Glen. Now, the last thing you want to do at the start of an endurance race (or any race, really) is crash, and Tristan Vautier had a lucky escape on the first lap when he got sideways at one of the fastest parts of the course. With a bit of help from another car, he managed to get the thing straight again without being collected by anyone else.

Behind him, Scott Sharp also went sideways, presumably in trying to avoid Vautier’s car ahead of him. He too managed to save it, only to lose it on the grass and spin into another car – Vautier’s car.

Well, they nearly got away with it!

Later in the race, the same part of the circuit saw an awesome three-way scrap for the lead between Jordan Taylor, Juan Pablo Montoya and Steven Simpson.

That ended up deciding the race, with the No.99 JDC-Miller Oreca of Simpson, Misha Goikhberg and Chris Miller taking their first overall series victory. 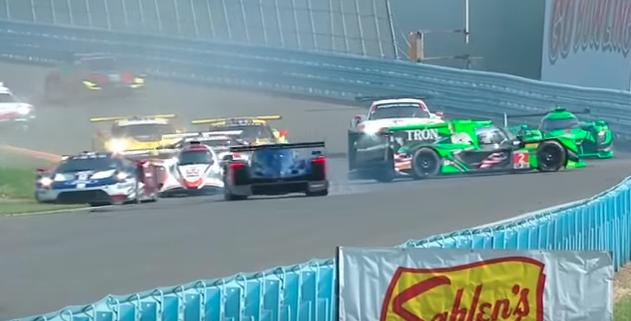