Umm what is that?: Five Indy 500 Oddities

Whilst the current edition of the world famous Indianapolis 500 will feature what are essentially spec-cars, the history of the event is littered with crazy one-off ‘Specials’, built by the kind of back shed pioneers that could be likened to some of the Land Speed Record engineer/drivers, creating mad cars from even madder ideas.

The 500 was established as a test of engineering and endurance, much like the Le Mans 24 Hours, and innovative, original cars were encouraged to turn up and try to qualify alongside the more conventional cars. Here is a selection of some of the more interesting ones… 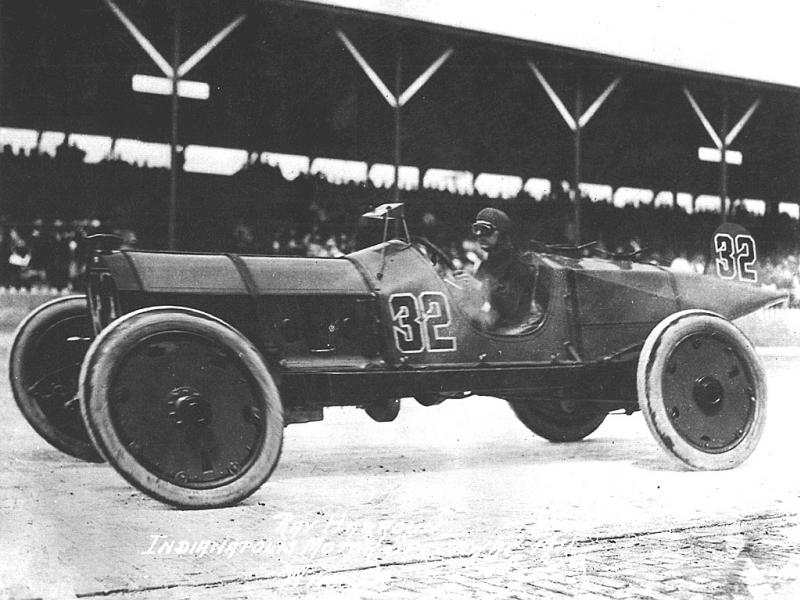 Ray Harroun’s Marmon Wasp was the winner of the very first Indy 500 in 1911, and was perhaps the most clear-cut predecessor to the modern single-seater of the time. Most cars entered in both this first 500 and the Grand Prix of the time carried both a driver and a riding mechanic, however, Harroun eschewed the conventional thinking and created a car that was a true single-seater. In doing so, he also invented the first rear view mirror as he didn’t have his mechanic alongside him to perform that particular task. Harroun and another driver, Cyrus Patschke (who relieved Harroun of his seat for 35 of the 200 laps) won the inaugural race at an average speed of 74.602mph and it was Ray Harroun’s last ever race, as he had only come out of retirement to contest the first 500-mile race. In doing so he established the standard layout for practically all single-seaters up until the mid-30’s.

Diesel engines are now the torchbearer for efficiency and speed at Le Mans, with the stealthy sounding Audi’s ominously tearing their way around the La Sarthe circuit. But theirs is not the first application of the technology, and this low-slung Special, driven by Fred Agabashian, is one of the first prominent uses of Diesel fuel in high profile motorsport.
The car used a Turbocharged 6.6 litre Diesel straight-6 that produced a not inconsiderable 380bhp. The engine was also rotated on its side in order to reduce the height and centre-of-gravity of the car, creating a very slim chassis. The offset engine also put more weight on the left side of the car, which is beneficial for handling at an oval track. The car itself was very fast, and Agabashian spent most of the Month of May actually backing off on the straights in order to mask its true speed. They eventually unleashed the car’s true potential on Pole Day with a 4-lap average of 139mph, a full 1mph faster than any of the competition. On Race Day however, things did not go according to plan for the Cummins Special, as rubber
and other debris clogged up the turbo inlet, causing the car to retire after 70 laps. No other diesel car has raced at Indy since the mighty Cummins Diesel flexed its muscles to such great effect in 1952. Perhaps there would have been more if they finished the race…

Offsetting the weight of the car at Indy is paramount to getting the right balance from the car in the four long left hand turns at the Speedway, so much so that each corner of the car even now will have a specific camber, toe, and weight distribution in order to maximise stability in the corners. This particular car, designed by legendary racing innovator Smokey Yunick, was created to take this idea to its limits of the time. Smokey was an incredible engineer, being the first man to mount a downforce-inducing wing to a racing car when he fitted a crude metal wing to Jim Rathmann’s 1962 racer (the car set record speeds in the corners, but suffered from massive drag that actually gave slower lap times). He also famously sought out regulation loopholes, creating a NASCAR Chevy in 1966 that was almost entirely non-stock, save for the parts of the car that the regulations stipulated. This Indy racer was designed on the premise that Yunick himself would provide most of the anchoring weight on the car’s left side, by putting his cockpit so far off the body of the ‘main car’, that it almost looked like an afterthought. The engine was also rear-mounted, still a novelty of sorts at Indy where front-engine roadsters had dominated (the 1964 being the last front-engine winner). Sadly the car didn’t qualify for the race, perhaps because it was too radical a design, despite there being no doubt of Yunick’s engineering prowess. A fantastically innovative car nonetheless.

The eccentric Andy Granatelli of STP commissioned this turbine-powered car after the designer, Ken Wallis, had been turned down by both Dan Gurney and Carroll Shelby. Wallis developed the Pratt & Whitney engine at STP’s headquarters, whilst Granatelli himself suggested offsetting the engine to the left hand side, as well as adding four-wheel-drive, then very in vogue in experimental single-seaters, to the bright red machine. The car was obviously much bulkier than the slimline cigar-shaped rear-engined cars that now dominated both F1 and the Indy 500, but its potential was plain to see when the great Parnelli Jones qualified it 6th on the grid with a speed of 166.075mph, and quickly took the lead on race day, only then relinquishing it when a transmission bearing failed with just 8 miles (3 and a bit laps) to go. A heartbreaking end to the race for such an oddity of a car. Lotus fitted the same engine to their Type 56 4wd car for the 1968 race, but the 3 cars entered didn’t finish (as well as a re-furbished Turbocar crashing in qualifying and not making it to the race) and the USAC rule makers quickly drove turbine cars out of the 500 by limiting their power. The final car wasn’t particularly odd in its looks or design, more the engine it carried and the reasons behind it. Ilmor and Mercedes Benz had studied the USAC rulebook, and found that there was a particular loophole that allowed pushrod (similar to those found in NASCAR) engines an extra 4.9psi of boost. Ilmor quickly sought about designing a one-off pushrod V8 that was claimed to produce upwards of 950bhp especially for the Indy 500 and the Penske team they were supplying works engines for. Ilmor knew that the engine would be swiftly banned after the race due to its massive power advantage, but also knew that no other engine maker had the resources (not in their IndyCar program at least) to develop a similar engine in reply to them, but carried out the development as an exercise of their technical prowess. The Penske cars of Al Unser Jr. and Emerson Fittipaldi took 1 st and 3rd on the grid, and went a lap ahead of the field in the race before Fittipaldi span into the wall on lap 184, leaving Unser to take the flag and win with only Jacques Villeneuve for company on the same lap. The financial outlay by Mercedes for what was intended as a one-off engine was massive, but they won the race and demonstrated just how good they and Ilmor were at building engines. Ironically due to trouble with their bespoke chassis, Penske failed to qualify any of their cars for the 1995 event, leaving them unable to defend what was their most dominant entry in the classic race).