Valtteri Bottas is the third different polesitter of 2021 after a really intriguing qualifying session where Mercedes locked out the front row with only 0.007s between them! Oooft, spicy! Lewis Hamilton was only just behind Bottas, with the wind picking up and making the final laps much trickier for everyone.

For a long time, it was too close to call between Mercedes and Red Bull, but when it mattered the fast pace from Red Bull vanished with Max Verstappen and Sergio Perez in third and fourth, four tenths behind.

MORE STRUGGLES FOR RICCIARDO AT MCLAREN

Qualifying looked like it would be dominated by track limits again and early on there were a few laptimes deleted including one for Lewis Hamilton who had not set a competitive laptime with under 10 minutes to go in Q1. It wasn’t a worry for him though because his next time was good enough for fifth.

Daniel Ricciardo was the shock exit in the first session of qualifying. He only managed a lap that was only good enough for 16th! To make it even worse, his new teammate, Lando Norris, was over a second ahead and finished the session in second. There weren’t any major mistakes in Ricciardo’s lap, he was just a bit scruffy and a chunk slower. It’s his first Q1 elimination since Japan 2019! Although Ricciardo has beaten Norris in the qualifying battles so far, this was quite the shock.

Lance Stroll didn’t make it a third Q3 appearance for Aston Martin, and was also knocked out in the first session. Valtteri Bottas topped Q1 ahead of Lando Norris and Lewis Hamilton with Max Verstappen in 11th with Red Bull clearly very confident in their first runs.

RUSSELL GETS CLOSER TO Q3 THAN EVER BEFORE

George Russell came painfully close to his first Williams Q3 appearance! He missed out on a top 10 start for by only half a tenth to Pierre Gasly who was 10th. It’s still Russell’s best ever start for Williams in 11th as he continues to drag the absolute most out of that Williams. He was 12th in Imola, 11th today, maybe that means good things for Barcelona?

It was a poor session for Fernando Alonso who was outqualified by Esteban Ocon again! It wasn’t even close either. Fernando’s time was three quarters of a second slower than Ocon who has had brilliant form all weekend. Ocon was in fourth at the end of the session.

A lot of teams tried to get through to Q3 on medium tyres so that they can start the race on the harder compound and, weirdly, Red Bull were much slower than Mercedes on those tyres. Hamilton was seven tenths ahead of Verstappen on those tyres, but in the end all the Mercedes and Red Bulls made it through on mediums, as did Charles Leclerc for Ferrari.

Hamilton topped the session with Bottas and Norris behind.

Mercedes were faster on the first runs in the top 10 shootout, Bottas ahead of Hamilton, but only because Max Verstappen had his laptime deleted for a mistake at Turn 4 and went over the line. The sector times for Max were much faster than the Mercedes because the Red Bull was just much more comfortable on the soft tyres.

In the end the first runs decided the order with Bottas and Hamilton not improving and locking out the front row. Verstappen was third and Perez fourth.

Verstappen was so disappointed at the end because his deleted laptime was good enough for pole and he didn’t gain any time. But that’s the way it is. The wind had picked up by the end of the session which really slowed the cars down and that looks to be the main reason Mercedes are on pole rather than Red Bull.

Carlos Sainz and Esteban Ocon both starred in fifth and sixth. 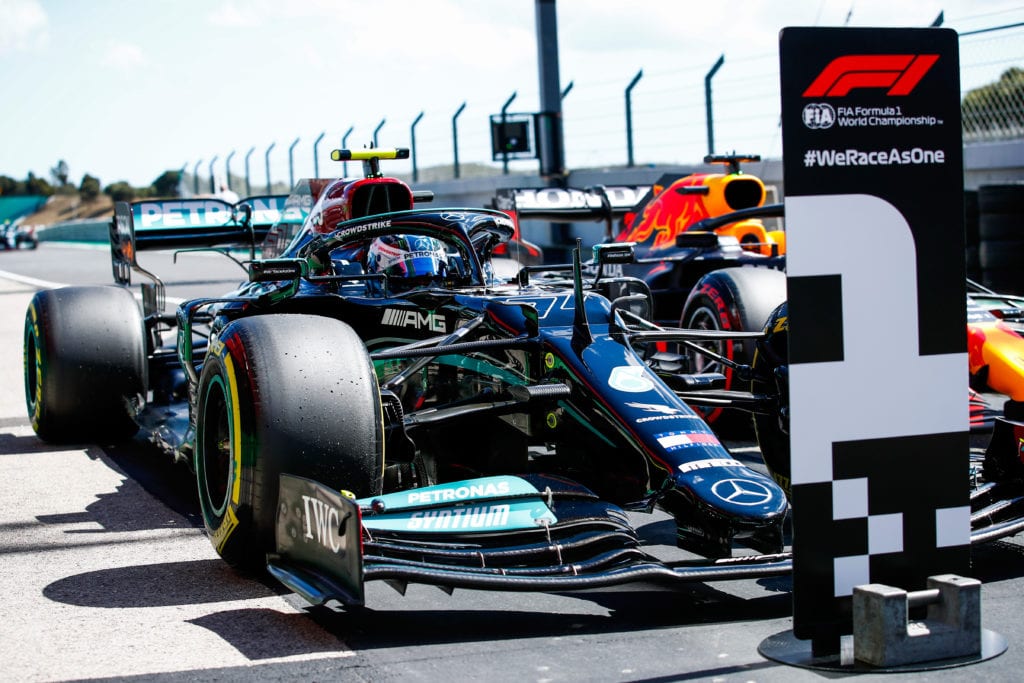