Verstappen And Norris Collided While Fighting For The Lead In A Sim Race At Spa – WTF1
Skip to content
×
Formula 1 , Gaming

Sim racing squad Team Redline has set up a series of events on iRacing as somewhere for real racing drivers with nothing to do to race each other. Called ‘Real Racers Never Quit’, the first event took place in F3 cars at Spa with a field of over 40 pro drivers from all sorts of championships.

Verstappen won the first race, but he didn’t have things all his own way in the second. As he and Lando fought for the lead (with plenty of bump drafting due to the fact damage was turned off), Kelvin van der Linde joined in and made it a three-way battle heading into the penultimate lap. As they went three-wide on the run up to Les Combes, Verstappen made his move for the lead… but then this happened:

Van der Linde snatched the win ahead of Philipp Eng and Mikkel Jensen; Lando finished fourth on the road but was then disqualified for doing donuts and driving the wrong way after the chequered flag, promoting Verstappen up to fourth.

The great thing about sim racing is that we don’t have to wait another week for a race – the next round of RRNQ takes place on Wednesday, this time using GTE machinery. We’re fully expecting more Max and Lando shenanigans… 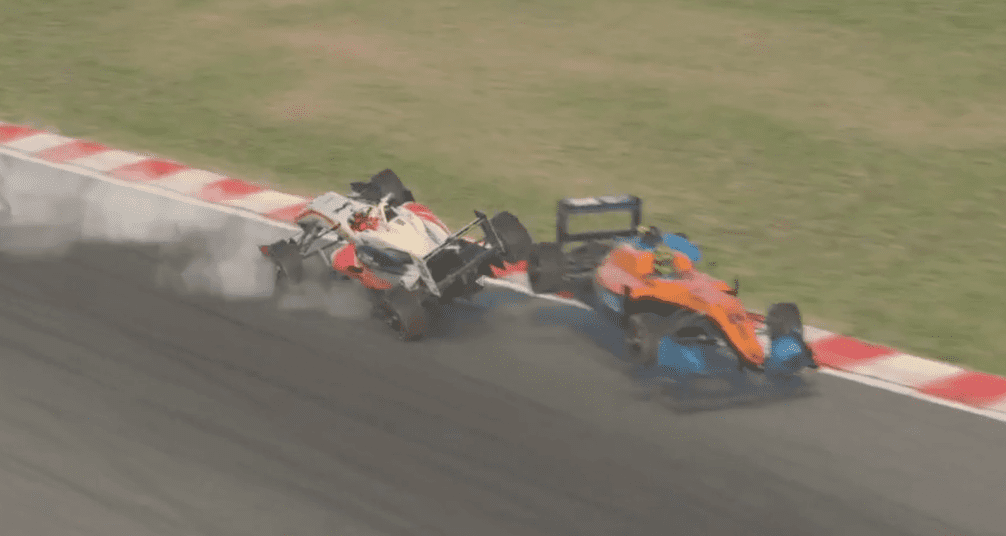