Max was joined by former F1 driver and Indy 500 winner Takuma Sato at the Tochigi Proving Ground for a taste of the 1965 Honda RA272 – the first Honda F1 car to win a grand prix.

Honda had first entered F1 the year before and in 1965 was starting to get into its stride, thanks partly to its glorious 1.5-litre V12 engine, which was the most powerful of its era.

With drivers Ronnie Bucknum and Richie Ginther at the wheel results were steady, and as the year progressed the car showed flashes of great promise. Everything came together in the season finale in Mexico – Ginther took the lead at the start and was never headed as he delivered Honda’s first win, with Bucknum making it a double points-score in fifth.

The RA272 is an iconic car, then, and Verstappen got the chance to take it for a spin. If it looks like his head is poking out the top a bit, then you’d be right – he found the cockpit a bit of a tight squeeze.

But that didn’t stop him from enjoying the experience. He said:

“It was very cool to get to experience this car. I think the oldest race car I’ve driven before today was from about 2008. It’s quite different, but I really enjoyed it. The pure emotion from the engine and the car itself was incredible. I didn’t even fit properly in the car! But it was an amazing experience for sure.”

“I’m very happy that I was born a bit later [than to have raced this car], but of course I’m really grateful to be able to experience it. I don’t think I would race it myself, and if you look back 50 years the evolution is insane. But it is good fun to go back to these cars.”

To add to the level of awesomeness, Verstappen then jumped in the 2011 Red Bull RB7 while Sato took a turn in the RA272, leading to some mega shots of the two cars on track together.

Sometimes, being a racing driver looks like a really difficult job, doesn’t it? 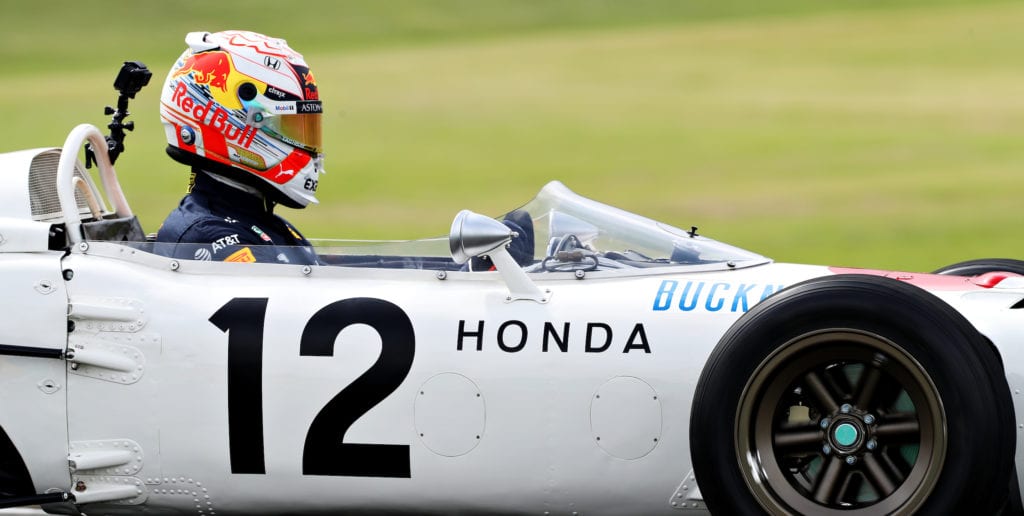