Verstappen Has Hit Out At The “Wankers” Who Ruined His Qualifying Lap – WTF1
Skip to content
×
Formula 1 , News

With a load of drivers going slowly at the end of their outlaps in the closing stages of Q3 there was a bit of a traffic jam going down the back straight, thanks in part to the two Mercedes drivers going very slowly in order to preserve their tyres for their flying laps.

There’s nothing at all wrong with that but it made it a bit tight for those at the back of the queue to get to the line and actually start their lap before the session finished. Max Verstappen lost out in a big way as he was passed by Sebastian Vettel and then two Renault drivers between the hairpin and the final corner as he was trying to make a bit of a gap, and was almost hit by teammate Pierre Gasly. It meant that Verstappen couldn’t make it to the line before the flag, prompting a bit of a rant at his fellow drivers over team radio:

After the race he continued his displeasure at the other drivers and vowed that he wouldn’t bother to follow the “unwritten rule” between drivers in future, telling Dutch TV station Ziggo Sport:

“We were just staying neatly behind each other, but at a certain point Vettel passed me and the two Renaults as well. So they f**ked up my entire build up, while there is an unwritten rule that you just follow each other. But whatever. From now on in qualifying I’m going to f**k them up as well.”

That unwritten rule he mentions is that on a qualifying outlap, drivers don’t pass each other ahead of the final corner – and this isn’t the first time in recent history that it’s been an issue. At the last race in Bahrain, Romain Grosjean was given a penalty for blocking Lando Norris, but both drivers placed the blame on Sebastian Vettel for passing Grosjean in the final corner.

And last year in Monza there was a spat between Kevin Magnussen and Fernando Alonso. Magnussen passed the McLaren driver before the Parabolica so Alonso, by that point well and truly in zero-f**ks-given mode, DRS’d his way back past Magnussen into the first chicane and ruined both of their laps.

It’s easy to understand why Verstappen is so annoyed – the slow outlap pace also prevented Gasly and both Haas drivers from setting a lap – but the problem with unwritten rules is that they’re not actually rules. And in a sport where any advantage needs to be taken, it’s unsurprising that situations like this can happen. Vettel himself explained to Motorsport-Magazin after the race:

“The problem is that all teams have the same timing and are therefore all in the same window. It was quite difficult at the end of the train because the team told me that we had only 10 seconds to get over the line and then I had to think about something. If everyone had sped up like me, we would all have made it.”

It’s one of those scenarios where you can’t really blame anyone. Teams and drivers can go out whenever they want during a session and if just happens to be at the same time, with a couple of minutes to go and on a track where a slow outlap is critical to a good lap time, these things happen. You can’t criticise the drivers from breaking a gentleman’s agreement in order to ensure they actually start a lap, you can’t really blame the teams for trying to send their drivers out at the best possible time (even if that does increase the risk of traffic) and you can’t blame Verstappen for being annoyed at the whole situation.

On another day in future, he’ll be the one taking advantage of other drivers to get his lap in, especially if he keeps his promise. That won’t make him a hypocrite or unsporting – it’ll make him an F1 driver. 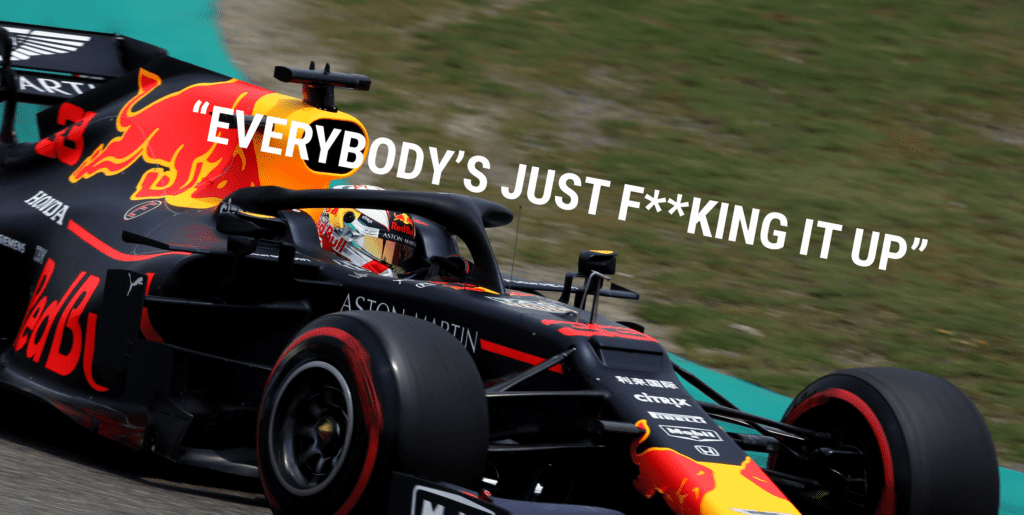