Well, for a Monaco Grand Prix, that wasn’t all bad. That is unless you’re Charles Leclerc. It was an early drama for the pole sitter who wasn’t able to start the race due to damage sustained from his qualifying crash yesterday. We also had a sprinkling of drama throughout the race, but it was Max Verstappen who took victory around these Monte Carlo streets.

F1 fans had been holding their breath since Leclerc binned it in the wall during Q3 yesterday. Yes, he’d manage to secure pole position, preventing his rivals from beating his lap time but instantly there was concern over his gearbox.

Ferrari confirmed yesterday evening that there appeared to be “no serious damage”, with yet more promising checks being done this morning. However, it wasn’t until Leclerc was on an outlap before the race, he radioed to his team, “no no no, the gearbox guys”.

Charles will not start the race due to an issue with the left driveshaft which is impossible to fix in time for the start of the race. #MonacoGP

He pulled into the pitlane, with the mechanics desperately trying to diagnose the issue before it was too late. Despite their best efforts, it was confirmed that Charles would not be starting his home race as there was “an issue with the driveshaft which is impossible to fix in time for the start of the race.”

Absolutely heartbreaking for Leclerc, who continues his record of never starting or finishing a race at Monaco.

Verstappen was promoted to first, however, still remained in the same grid slot – despite a cheeky request from Red Bull to put Max on the clean side of the grid as the slot was empty. It was declined.

As for the start of the race, Verstappen got off clean and led into Turn 1. Same for Valtteri Bottas, who had been promoted into second and started on the clean side of the grid with no Leclerc in his way. It was generally a very clean getaway for Monaco, with no big dramas apart from a dicey overtake from Mick Schumacher on his teammate Nikita Mazepin at the hairpin.

Then, it was very much a game of ‘follow the leader’ until Lap 30 when Mercedes decided to pit Lewis Hamilton. The stop itself was quick, just 2.2 seconds, but the gamble would ultimately not pay off. His teammate, however, had it much worse.

Bottas pitted on Lap 31 from second on the grid, but his front right would not budge. Like it was legitimately stuck. Not even the spare wheel gun or sheer force would have fixed the issue, which was apparently the result of a wheel nut that had machined itself to the axle. Bottas was out. Heartbreaking.

During all of that panic, Pierre Gasly also pitted and came out ahead of Hamilton, which he really didn’t like: “How am I still behind him?” he asked on team radio. Gasly would finish in sixth, holding Hamilton off for the rest of the race to cross the chequered flag in seventh.

Elsewhere on the street circuit, Verstappen continued to lead the race, with Carlos Sainz being promoted up to second after Bottas’ retirement. Lando Norris in his special Gulf McLaren was also now in third, with Sergio Perez having pitted on Lap 36 and was comfortable in fourth. The Mexican did see a chance to catch up to Lando, though, so he was pushing hard to close the gap for that last podium spot.

As expected from Monaco, there wasn’t a great opportunity for much overtaking. A few teams left their drivers out as long as possible, in the hopes a late safety car would show, but we didn’t have a single one – that’s the first time that’s happened since 2009. We also had NO yellow flags, incredible scenes.

It was a tense last few laps as we waited to see if there would be any drama as the fatigue set in. Even Lando’s engineer radioed about concentrating with just a few laps to go.

Eventually, Max saw the chequered flag, with Sainz and Norris bringing us plenty of ‘Carlando’ content on the podium. It’s the first time either of those three drivers have been on the podium here in F1. Awesome stuff.

Max’s victory today also puts him at the top of the drivers’ standings, with Red Bull also getting the top spot in the constructors’ championship. It’s the first time Mercedes has not led the Constructors’ Championship since Ferrari led things after the 2018 British Grand Prix.

It was also a good day for Checo, who finished in fourth, with Sebastian Vettel finishing in fifth place and winning ‘Driver Of The Day’. Gasly and Hamilton finished in sixth and seventh place, respectively, with Lance Stroll, Esteban Ocon and Antonio Giovinazzi completing the top 10. 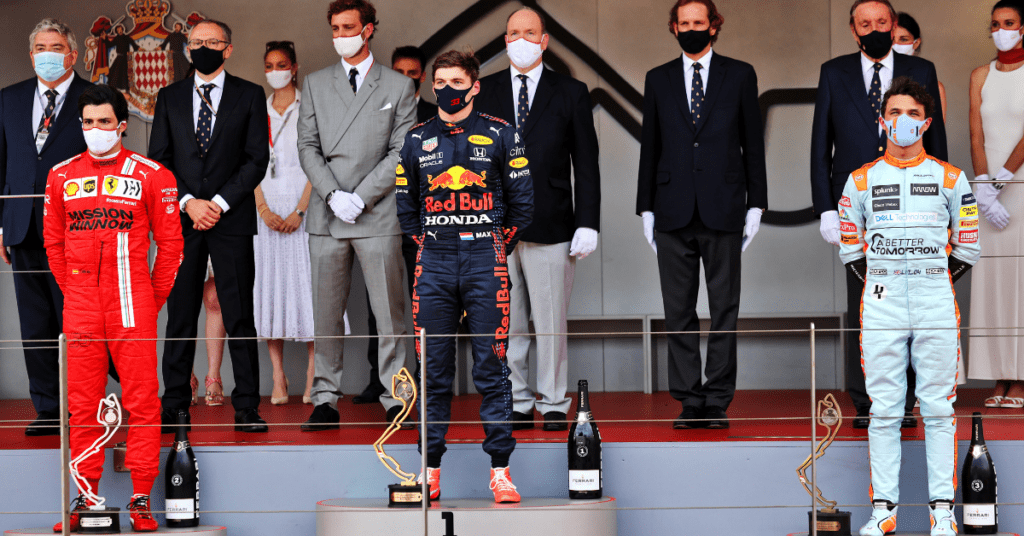