Lewis Hamilton was caught on camera calling Max Verstappen a “dickhead” after seeing the Dutchman’s lap 2 tangle with him in the cooldown room before taking to the podium.

Although seemingly innocuous in tone, Hamilton was questioned about the remark in the formal press conference, with Vettel leaping to the reigning champion’s defence.

“I think it’s not fair,” said Vettel, who took a thrilling victory ahead of Mercedes duo Valtteri Bottas and Hamilton.

“I don’t know what Lewis did. We have all been in that situation, we fight someone, we go sometimes wheel-to-wheel, it’s close and you have a lot of adrenaline going.”

Vettel added that in the heat of competition, racing drivers are not always inclined to say nice things about their competitors – saying that it’s no different to athletes in other sports.

“Do you think – comparing to football – if you have a microphone on a player’s mouth, that everything he says is something nice and is a nice message when the guy tackles him and maybe sometimes he fouls him or not?

“So I don’t think it’s justified to give us these kind of shit questions and making up a story out of nothing, if we are just racing and we are full of adrenaline and sometime we say these things.

“I mean if I hit you in your face, you’re not going to say “oh, Sebastian, that wasn’t nice”. It’s a human reaction.”

The German called the whole furore “artificial”, and warned the present journalists from making “a story out of nothing”.

“Sometimes,” he said. “I feel it’s all a bit blown up and artificial if we have these questions, trying to make a story out of nothing. So, it’s not personal, don’t take it personal. So I think we should cut it right there.”

When speaking about the comment, Hamilton pleaded ignorance, saying he “didn’t really remember” it and called the collision with the Red Bull “unnecessary”.

“Ultimately, I had a coming together with Max and it was an unnecessary collision,” he stated.

“There needs to be a certain respect between drivers. Maybe I need to go and watch the manoeuvre again, but it didn’t feel like a respectful manoeuvre, but ultimately it was silly, because he didn’t finish the race.” 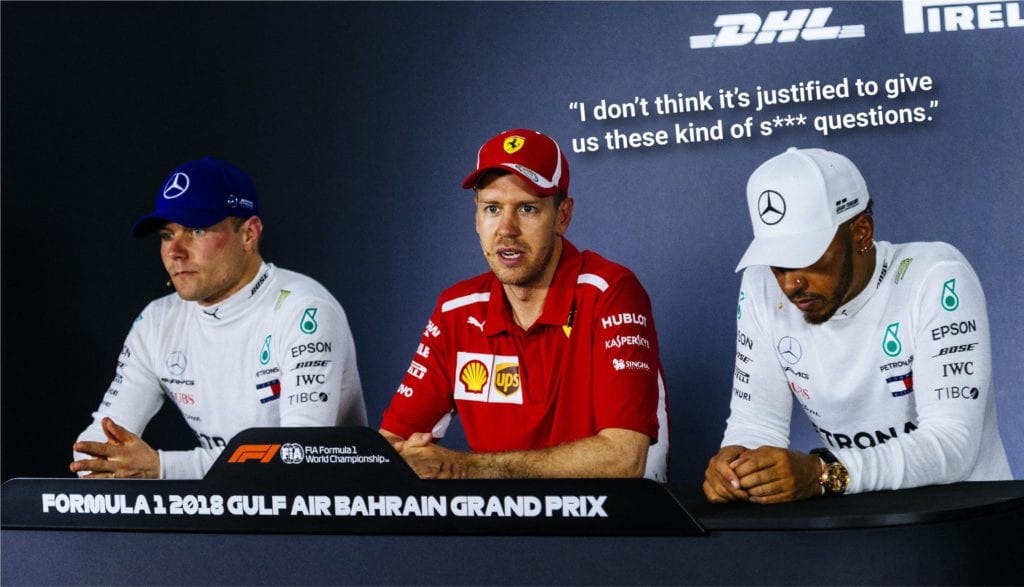