Vettel Finally Gets Another Win In A Race Filled With Weird Strategy – WTF1
Skip to content
×
Formula 1 , News

The early stages of the race saw the front-runners desperately trying to keep their tyres in decent shape to the point where at one point, Williams had the fastest car on the track. It was all about the top teams waiting for a gap to appear in order to be able to make a pit stop and drop out in clean air and Vettel, running third at the time, was the first to come in.

A lap later, Charles Leclerc pitted from the lead and came out behind his teammate. Furious at the way things had worked out, he was powerless to respond on track and ended up following his teammate home to secure Ferrari a one-two – and who could have predicted that at the start of the weekend?

So, Vettel lucked into a win, right? Errr, not quite. At the time he came into the pits, Vettel was just over three seconds behind Leclerc – could the team really have known that he’d make up all of that gap (and more) in the space of the single lap before Leclerc came in? The idea behind pitting Vettel first was probably meant to jump him ahead of Lewis Hamilton and perhaps lure Mercedes into pitting earlier than they would have liked. That Vettel was able to jump both of them was a combination of his stellar outlap and the quirk of the strategy teams were employing this weekend.

Vettel then drove superbly again when it came to passing the long-running drivers in the midfield. A slightly squeaky-bum-time moment with Pierre Gasly aside, he managed to get through the pack much more efficiently than his teammate did, and managed to pull out a five-second gap before the safety car came out for the first time. He then stayed cool during the various restarts and seemed to have more than enough pace in hand to prevent a fired-up Leclerc from really getting close enough to challenge him. It was a super drive and on a personal level, it’s hard not to be happy for a guy who’s come under a lot of stick over the last year or so – especially since really, this should be his second win of the year.

Max Verstappen finished third as he capitalised on a rare strategy misstep from the Mercedes team. After the Ferraris stopped, Hamilton stayed out for a few laps more, but on worn soft tyres it quickly became apparent that only a safety car would enable him to pit and get out in front. Even the midfield cars on their medium tyres were quicker than Hamilton and once he stopped, he came out a distant fourth, where he ultimately finished.

Except, it perhaps should have been fifth. Valtteri Bottas pitted a few laps before his teammate and looked like he’d pulled off the undercut, only to receive a “Valtteri, it’s James” message instructing him to slow down so that Hamilton would rejoin ahead, ‘for the good of the team’. That’s a bit of a yikes moment, especially as the championship battle is realistically only between those two…

The team’s only hope of catching Ferrari was having fresher tyres towards the end of the race, but the various safety cars negated the advantage and Hamilton ran out of laps to even pass Verstappen.

The midfield had a good bit of time in the spotlight, too – specifically Antonio Giovinazzi. So slow was the pace at the front, that once those ahead of him made their first stops he was actually able to spend a few laps in the lead ahead of Pierre Gasly and Daniel Ricciardo (what a podium that would have been), which made for an interesting sight!

Behind the Ferrari, Verstappen, the Mercedes’ and Alex Albon, Lando Norris topped the midfield with a quietly impressive drive, ahead of a superb Gasly, Nico Hulkenberg, and Giovinazzi.

The safety cars came thick and fast in the second half of the race – the first when Romain Grosjean tipped George Russell into the wall, the second when Sergio Perez’s Racing Point broke down, and the third when Kimi Raikkonen failed to see Daniil Kvyat lunging past him into the first corner, turned in on him, and broke his suspension.

Overall it was a bit of a weird race and although Leclerc has a right to be a bit miffed that Vettel ended up on the better strategy, it doesn’t invalidate the fact that Vettel drove a superb race and is a thoroughly deserving winner.

The real story, though, is how Ferrari managed to win so convincingly at a track which nobody gave them a hope of being so competitive at. The SF90 now finally seems to take the corners and look after its tyres as well as it goes down the straights and could be a real threat at all the remaining tracks this season. If only they’d figured it out sooner and capitalised on some of the earlier chances, then maybe the title fight would be looking like such a foregone conclusion. 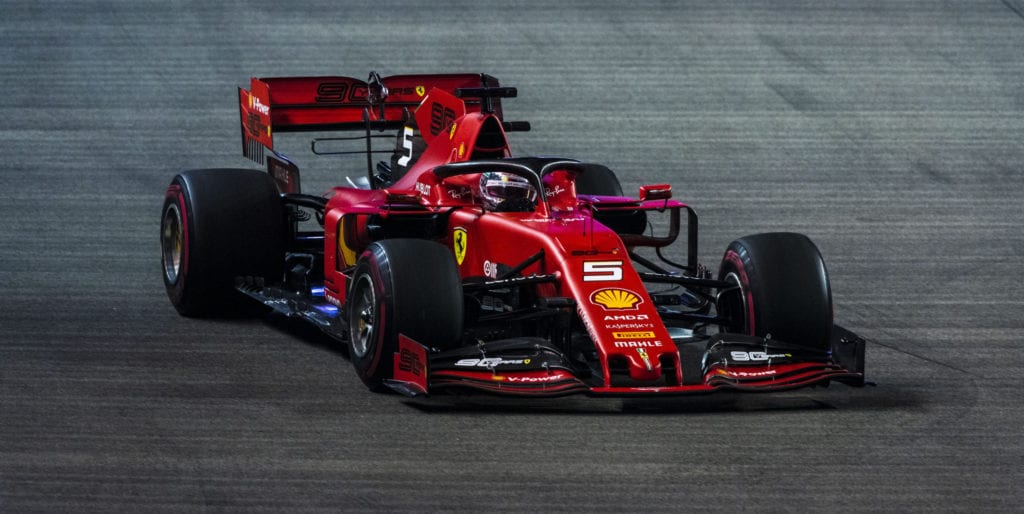