Vettel’s Impeccable Sportsmanship Was The Highlight Of The Mexican GP

The Mexican GP was an unusual race, what with the weird tyre strategies, massive gaps between cars and Lewis Hamilton clinching the title with an anonymous drive to finish fourth. We’re still undecided if it was a good race or a bad race.

What we can be certain about, however, is what a gracious and brilliant sportsman Sebastian Vettel is. Although the championship has looked lost for a few races now, after the race he seemed genuinely heartbroken that he’d finally slipped out of contention. It’s the mentality you’d expect from any champion in any sport, but rather than throwing a simple congratulations Hamilton’s way he heaped genuine praise on his rival and admitted he’d been the better driver. Vettel said after the race:

“He drove superbly all year. He was the better one of us two. I told him it was well deserved and to enjoy it. Number five, I think it’s something incredible. So I mainly congratulated him and asked him to keep pushing for next year and said I’ll do my best to fight him again.”

Vettel also spoke openly about how it feels to lose a championship, saying in the press conference:

“It’s a horrible moment. You put a lot of work in and even if you saw it coming – I did pay attention in maths so I could do the numbers – you hang in there as long as you can. Three times now in my life I’ve had that sort of disappointment where you realise one day that you can’t win the championship anymore and those are not happy days.

“You reflect on not one moment, but the whole year and the work that goes in, the effort that goes in from the end of last year until now. We had our chances, we used most of them. Maybe some we did not. But in the end we were not good enough.”

It’s hard not to feel a bit sorry for the guy. Even though many of the reasons why he’s not the champion have ultimately been his fault, it doesn’t mean that the level effort and determination he’s put into this season are worth any less. In fact, it’s been better to see him lose the championship from trying too hard rather than slowly and anonymously slipping out of the fight as a result of a string of reliability issues, as was the case last year.

‘Actions speak louder than words’ is a horrible cliché, but in this case it’s true of Sebastian. His interviews and opinions are refreshingly candid (and have been all season) but the way he conducted himself after the race is a true measure of the man. Firstly, he broke off his podium interview with David Coulthard to go over and embrace his rival and offer congratulations.

The real icing on the cake, however, was when he visited the Mercedes garage to shake hands with engineers and team personnel he and Ferrari have been fighting against all season.

Humility in victory, grace in defeat.

These are the attributes of great champions. 👏👏👏#MexicoGP 🇲🇽 #HiFive pic.twitter.com/kLoNVuEiFL

Now that is one classy driver – the very epitome of being a good sportsman. It’s unusual to see in F1, especially between title rivals, where we have this idea and expectation that there should be a deep-seated hatred between the two and where any compliments between them should be as superficial as possible.

That’s rarely the case, but even so, Vettel went above and beyond what you’d normally expect. In the dark place of realising that the championship was out of reach for another year, his humanity shone through. It wasn’t Sebastian Vettel the F1 driver congratulating Hamilton and Mercedes, it was Sebastian Vettel the person. And that was rather lovely to see. 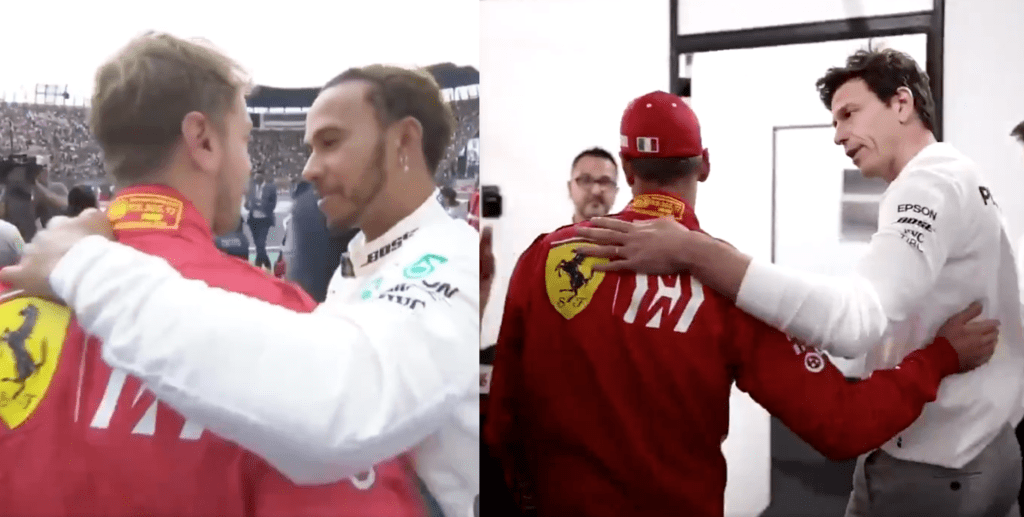