Vitaly Petrov was runner-up to Nico Hulkenberg in the 2009 GP2 championship, and like Hulkenberg he was promoted to F1 for the 2010 season, replacing Romain Grosjean at Renault to become Russia’s first Formula 1 driver.

During his three years in the sport, he proved a solid midfield driver who was prone to occasional flashes of brilliance, and also featured in a couple of iconic moments.

Since 8 September is his birthday, we thought we’d take a look at some of his most memorable moments from his time in the sport.

After a low-key start to his F1 career in Bahrain, Petrov grabbed a bit of attention in his second Grand Prix in Australia.

Starting down in 18th on a wet track, he made an absolutely awesome getaway, threading his Renault through impossible gaps and showing total commitment in the tricky conditions. He shot from 18th to 10th and was looking pretty handy.

Unfortunately for him it didn’t last long as he spun out on lap 10, shortly after switching to slicks.

Petrov’s first season was fairly muted. There were smatterings of points and the odd impressive drive – such as in Hungary, where he outqualified teammate Robert Kubica and went on to finish fifth – but generally Kubica’s brilliance made Petrov look somewhat ordinary. He often raced well but tended to struggle a bit on Saturdays.

However, in the last race of the season in Abu Dhabi, Petrov played a massive part in the outcome of the championship. He pitted behind the safety car at the end of the first lap, and when title contender Fernando Alonso emerged from his stop later in the race he came out behind the Renault.

For 39 laps a frustrated Fernando simply could not get past as Petrov stayed cool and used the excellent traction of the Renault to keep him behind. Petrov crossed the line in sixth and a furious Alonso let him know exactly how he felt.

Alonso’s inability to get had ahead opened the door for Sebastian Vettel to win his first championship, and Petrov had ensured his place in F1 folklore.

Despite being resoundingly thrashed by Kubica in 2010, Petrov’s backing was enough to convince the team (now called Lotus) to give him another year.

Petrov instantly delivered, qualifying a career-best sixth for the opening race of the season and jumping up to fourth at the start. From then on he made the most of a two-stop strategy which was enough to move him into third place.

Alonso closed in on him towards the end, but Petrov held him off (again) and he became the first Russian driver to score an F1 podium.

In the next race in Malaysia, Petrov was running in the points with a few laps to go when he made a bit of an error. He ran wide at turn eight and kept his foot in when rejoining, in the process finding a massive jump.

The landing broke his steering and put him out of the race – a shame for Petrov, but absolute gold for the internet, which became rife with memes and photoshops of his short flight.

The rest of 2011 didn’t go too well for Petrov or the team as it could keep up in terms of development. Although Vitaly fared well against teammates Nick Heidfeld and Bruno Senna the team elected not to keep him for another year, and he was left without a drive.

Just before the 2012 season was due to start, the Caterham team decided they’d prefer Petrov’s money over Jarno Trulli’s…well, we’re not sure exactly what Trulli was bringing to F1 at that point of his career.

Petrov had a solid season, and by the end of it was regularly out-pacing teammate Heikki Kovalainen. Heading into the final race in Brazil Caterham was looking to snatch 10th in the Constructors’ Championship from Marussia; the extra cash for doing so would be critical to such a small team.

Now as I’m sure you all remember, Brazil 2012 was a bonkers race – even more so than it had been in 2008 – and the conditions provided the perfect opportunity for a team like Caterham to snatch a result.

In the closing stages of the race Petrov did exactly that, passing the Marussia of Charles Pic to finish a brilliant 11th – the best result of any of the ‘new teams’ up to that point, and enough for Caterham to leapfrog its rivals in the final standings.

Despite his efforts in helping the team with a brilliant drive at Interlagos, Petrov found himself out of F1 for the following year – a situation Felipe Nasr surely knows all too well.

Since then Petrov dabbled in the DTM before eventually settling on sportscar racing, where he currently races for the Manor team in LMP2. 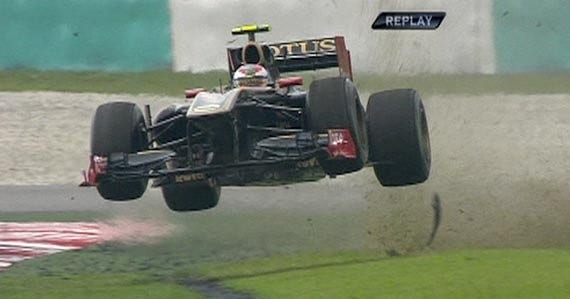