Volkswagen’s Bonkers Electric I.D. R Is Now The Second Fastest Car Around The Nordschleife Ever – WTF1
Skip to content
×
News

Volkswagen’s Bonkers Electric I.D. R Is Now The Second Fastest Car Around The Nordschleife Ever

6:11.13. That’s the time Stefan Bellof set around the Nordschleife in his Porsche 956 in 1983 which, for over 35 years, stood as the ultimate lap record around one of the world’s greatest and most feared race tracks. For a while, it looked as though it may never be beaten.

Until recently. Last year, Porsche took its unhinged 919 Evo around the ‘Ring and smashed the time by almost a minute. Now, a second car has bested Bellof’s time and, if proof of the potential of such a powertrain was ever needed, it’s the all-electric Volkswagen I.D. R.

The idea was to simply take the electric record of 6:45.90 seconds from the Nio EP9 but it destroyed that, too, as Romain Dumas lapped in a time of 6:05.34 seconds.

What makes it impressive is the fact the I.D. R was originally developed for Pikes Peak, where it shattered the overall record last year. Pikes Peak is all about maximum downforce and acceleration, with straight-line speed being of minimal concern – almost the exact opposite of the Nordschleife (something Dumas mentioned last year when we asked about the possibility of beating the record).

To combat that, Volkswagen had to make a number of changes, namely to the energy management system and the aerodynamics, including the addition of a DRS system – useful, especially down the Dottinger Hohe.

Dumas said of his record-breaking achievement:

“It was very exciting. We worked hard on the car after each run, and improved the balance on each lap. I was getting quicker every time, and with each lap you had to adapt your style. During the lap you have to keep your confidence so you can keep pushing even more.

“Pikes Peak was one of the biggest achievements of my career, and what is impressive is how we improved the car in one year. One year ago in Pikes Peak everyone was surprised by the time we achieved, but now we’re playing with the limiter, and the engineers are working harder and harder to get to that limit.”

On top of all that, the I.D. R ‘only’ has the equivalent of 671bhp – half that of the Nio, and almost 500 less than the 919 Evo. That means much of its lap time gains will have come from carrying colossal amounts of corner speed. We can’t wait to see the onboard! 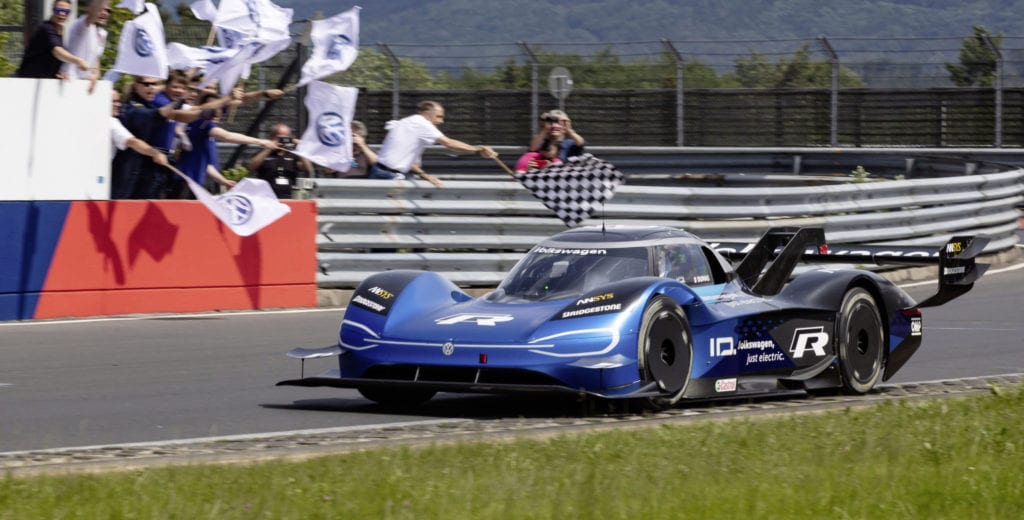