VW entered the car at Pikes Peak last year with the same intention – to beat the electric record at the legendary hill climb. Driven by Romain Dumas, the car proved so competitive that it actually ended up smashing Sebastien Loeb’s all-time course record by 16 seconds and becoming the first driver to complete the course in under eight minutes.

The car then headed to the Goodwood Festival of Speed, where Dumas shattered the electric car record and came within a couple of seconds of beating Nick Heidfeld’s all-time record, set in a 1998 McLaren MP4/13.

In simple terms, the I.D. R is really bloody fast, and now Volkswagen and Dumas are going after another record – the electric record of the Nordschleife.

Last year, we asked Romain about the possibility of going after this record and he said it would require a lot of changes – and indeed, Volkswagen is having to rework various things ahead of the attempt. VW Motorsport technical director Francois-Xavier Demaison said:

“Above all, we will modify the aerodynamics of the I.D. R, in order to cope with the conditions on the Nordschleife, which differ greatly from those on Pikes Peak. As part of our meticulous preparations for the record attempt, we will put the I.D. R through an intense test and development programme at various racetracks in the spring.”

“The thought of driving the ID. R on the Nordschleife is already enough to give me goosebumps. I know the track very well, but the ID. R will be a completely different challenge, with its extreme acceleration and huge cornering speeds.”

So, can it do it? The current record stands at 6min 45.9 seconds, set by Peter Dumbreck in a Nio EP9. The I.D. R is probably slightly lacking in terms of raw power but the lighter weight and huge levels of downforce should be able to make up for it in the corners. It could be close. Then again, the I.D. R has beaten records at Pikes Peak and Goodwood rather easily so it wouldn’t be entirely surprising if the same thing happens at the Nordschleife.

Porsche’s blitzing of the circuit last year with the 919 Evo puts the outright record out of reach, but who knows – Stefan Bellof’s legendary 6min 11.13 from 1983 could be within reach. Just like with Porsche, it’s great to see Volkswagen going after a record just for the sake of it.

We can’t wait to see a proper electric racer really put the green into ‘The Green Hell’ (sorry not sorry). 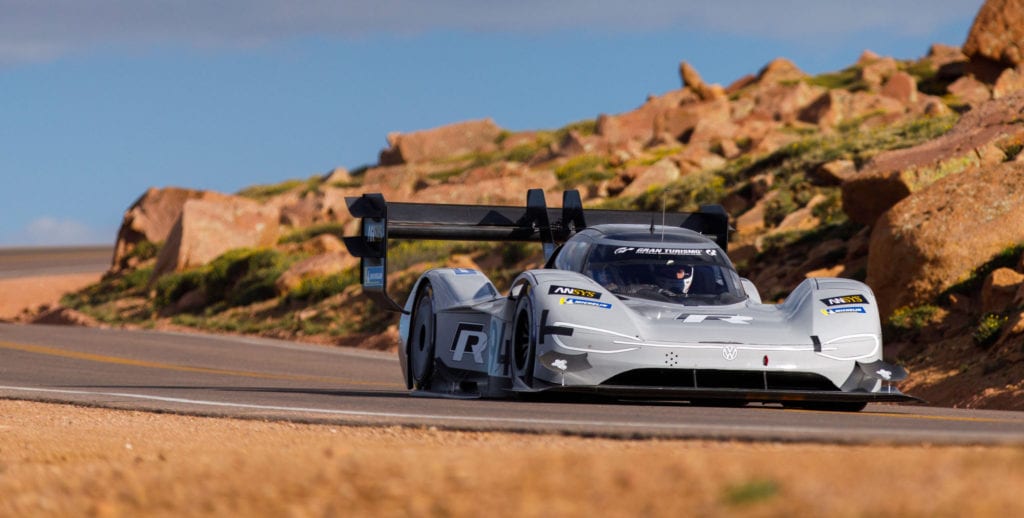