With a packed grid of cars for the Japanese F4 championship at the awesome-but-narrow Sugo circuit, cars started going off everywhere on the opening lap. One even somehow managed to tear out a camera cable before getting beached at the chicane!

It created a bit of a mess so the safety car was sent out, but with drivers battling for position not everyone noticed the yellow flags and two cars collided back in the pack, sending one car into a roll.

It’s tough to see from the camera angle, but as the pack slowed down it seems that Sho Onodera (in the white car) was unsighted and went clean over the top of the black car of Miki Koyama. The impact was violent enough to rip the floor off of the car, making for a very unusual sight. Unfortunately it appears that Koyama took a blow as well, as she was attended to by medics for several minutes before being taken away in an ambulance.

Thankfully she seems to be mostly ok and tweeted a photo after the accident, complaining of a sore neck and hand. 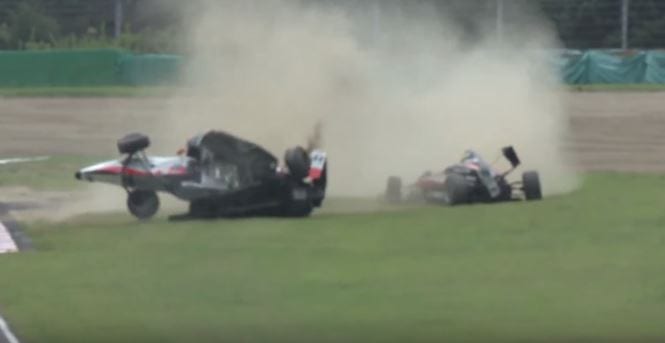