Watch A WRC Car Get Some Serious Air After Hitting A Bridge – WTF1
Skip to content
×
Crash , Rally

One of the places you probably don’t want to crash at during a World Rally Championship event is a bridge with a very low wall – especially when your car flies into the air.

Hanninen’s mean-sounding Toyota Yaris WRC slid wide into a corner while going over a bridge and the force of the crash put it onto three wheels, but thankfully it landed back on the tarmac.

It could’ve been much worse if his car had landed on top of the wall, or gone over it. The shunt did cause him to retire from day one after the first stage of the 2017 Tour de Corse though.

Hardly the best of starts to the rally, although his day ending early was unsurprising after such a big hit with a very solid wall.

YouTube user CambaoMotorsport managed to capture the crash on film, with his fan-camera providing an alternative angle of Hanninen smashing into the wall.

Jiří Tureček caught a seriously cool slow-motion shot of Hanninen’s wheel on fire after the crash, obviously caused by the unfortunate meeting with the bridge.

It seems the Yaris WRC was able to continue for a bit longer despite a damaged steering arm and then the right-rear wheel set fire.

Hanninen lost 13 minutes putting out the fire but eventually retired from the day’s running, before returning for day two. The car clearly couldn’t handle the heat… 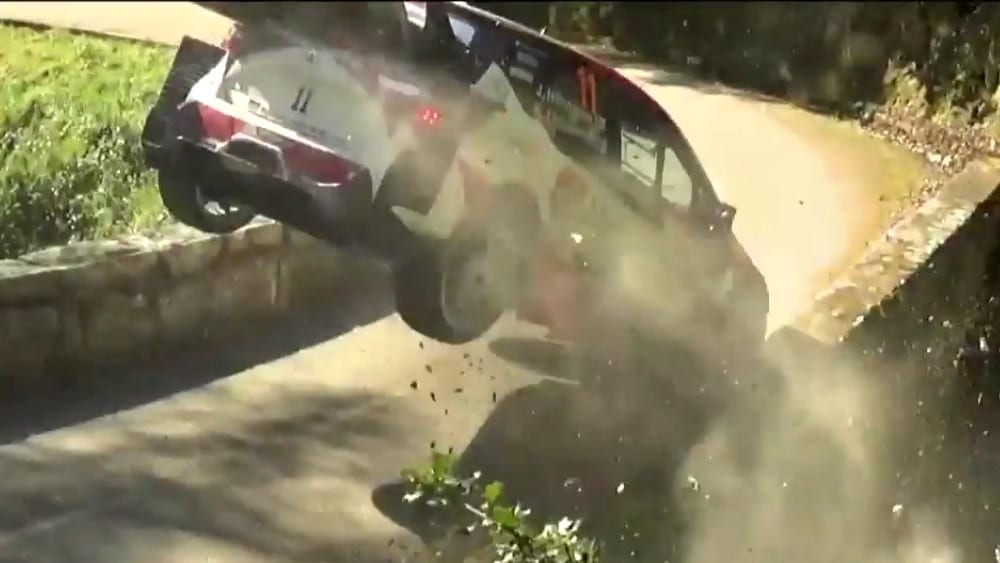