Watch Highlights From A Thrilling WEC Race At Spa-Francorchamps

The 2017 World Endurance Championship continued with the 6 Hours of Spa and the race ended up being even closer than it was at Silverstone, with less than two seconds separating first and second at the end of the race.

Toyota ran a third car in low downforce specification in preparation for Le Mans next month, but it was the two regular Toyotas that ended up duking it out for victory after the pole-sitting No.1 Porsche faded during the race.

But as ever in the WEC it isn’t just the LMP1 class where you need to look as the other categories were also very closely fought, as you can see in the highlights video:

The No.7 Toyota of Mike Conway and Kamui Kobayashi (Jose Maria Lopez had to miss the race after being injured in his Silverstone smash) was looking like the most likely winner, but a badly timed Full Course Yellow saw them drop behind their team mates in the No.8 car. In the closing laps Kobayashi was reeling in Sebastien Buemi and was shaping up to make a pass, but with a bit of help from traffic the No.8 car held on to take its second victory of the year.

LMP2 saw some frantic action in the early stages of the race but things eventually settled down and the G-Drive Oreca won, whilst the GTE-Pro category featured something of a battle royale, with the two AF Corse Ferraris spending most of the race up front, glued to each other’s bumpers.

The next race is the big one, Le Mans, which will take place on 17-18 June. Toyota has never won the French classic but are looking strong this season, and with three cars entered 2017 could finally be its year. 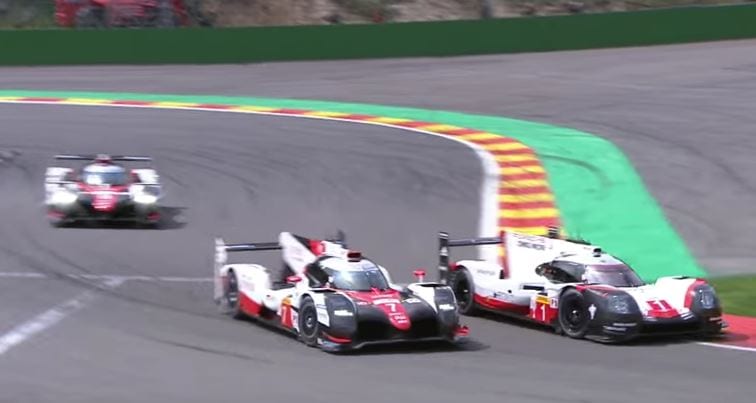