In his second season with Ferrari in 1985, Michele Alboreto was proving to be a genuine championship challenger. Two wins and a string of podium finishes meant that after 11 of the 16 races he was just three points behind McLaren’s Alain Prost at the top of the table – not much of a deficit with five races still to go.

Little did he know it at the time, but Alboreto wouldn’t trouble the scorers for the rest of the season. Car failures in Monza and Spa dropped him 16 points behind Prost and left his title hopes hanging by a thread for the European Grand Prix at Brands Hatch.

When a dramatic turbo failure on lap 13 put him out for the third race in a row, Alboreto didn’t simply stop at the side of the road. Oh no, he decided to drive his burning Ferrari right down the pit lane, unbuckling his belts and standing up as he coasted along to the Ferrari pits, as if to make a point over whose fault it was that he hadn’t won the championship.

Nigel Mansell won the race for Williams (his first Grand Prix victory) whilst Prost brought his McLaren home in third and secured the championship with two races still to go.

Even after he’d lost the championship Alboreto’s season didn’t get any better as his Ferrari 156/85 broke down in the final two races as well. It would be the closest the likeable Italian ever got to title glory and to make matters worse, his win in Canada that year turned out to be the last one of his career, despite spending a further three seasons with Ferrari.

It’s an unflattering statistic for a driver who, for one season at least, was up there with the likes of Prost, Mansell and Ayrton Senna as one of Formula 1s very best. 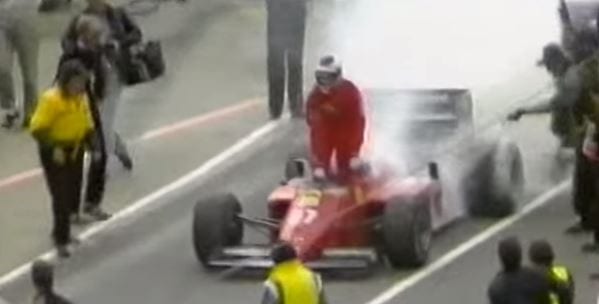