Can we let you into a little secret? When Aston Martin announced their entry in F1, we were super excited. However, a small piece of our heart broke when we realised that it probably meant ‘bye bye’ to the iconic pink BWT livery. However, this might not be the case anymore!

Although at first it was met with some really negative comments, with Nico Hulkenberg even joking that the very pink livery was the reason he left the Force India team at the time, we have come to love it. Of course, it’s now also been associated with some special F1 moments, like when Sergio Perez won his first F1 race in Sakhir last season.

But it looks like BWT and their pink colour scheme could be remaining in F1 after all!

Although nothing has been confirmed, paddock gossip suggests that the water company could be sponsoring another team on the grid in 2021.

Two teams keep coming back into the conversation: Williams and Haas.

Despite this currently being purely speculation, it would make sense. BWT’s partnership with Racing Point started in 2017 and helped make them one of the most recognisable sponsors in the sport.

Elsewhere in motorsport, BWT has previously partnered with DTM, Formula 2 and Formula 4.

So, let’s take a look at the two teams BWT have been linked to for the upcoming season.

The first is Haas. Now, it’s understood this is the less likely of the two. Not only will new addition Uralkali be bringing in some serious dollar bills – a Russian chemical company led by you know who’s dad – but Gene Haas apparently wants to keep the team as just ‘Haas’.

They’re probably being extra diligent about who they bring on board after their horrendous dealings with Rich Energy. Gene Haas is also busy wanting to promote his own ‘Haas brand’ on the Haas car, rather than worrying about title sponsors.

The whole scenario is giving off big ‘Obama gives himself a medal’ meme, right?

Next up, and the more viable option, is Williams Racing. They’re under new ownership after the departure of the Williams family last year, with private investment firm Dorilton Capital now in charge.

It’s fair to say that Williams hasn’t been performing as well as they should or want to, but with new management and a fiery driving pairing, it’s hoped things are on the up. But, as you’ll all know, F1 is a sport where you need money and lots of it.

Money talks, and with Williams being without a title sponsor, this could be the perfect opportunity back into F1 for BWT. Plus, a dark blue and baby pink livery would be goals. Just saying.

Williams is scheduled to launch their FW43B 2021 challenger on March 5, giving them a few additional weeks to come to an agreement. They might have already released their merchandise for the year, but don’t that as a reason as to why things won’t change.

Would you like to see a pink Haas or pink Williams? 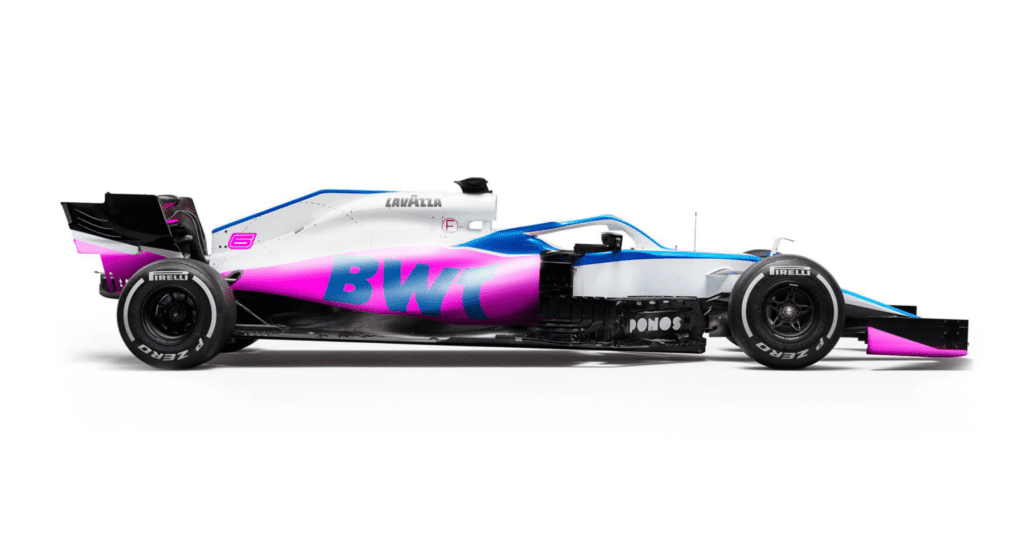