We Spoke To The Guy Behind McLaren’s eSports Competition

The eSports arena has burst into life in the motorsport world. Earlier this year, there was a huge Formula E virtual racing event in Las Vegas, and F1 recently decided to launch its own eSports series.

Another eSports competition that’s captured our attention is World’s Fastest Gamer, a collaboration between the McLaren F1 team, Logitech G and Darren Cox, who had a big role in the success of GT Academy.

A qualifying event was held recently at Silverstone and we spoke to Cox about all things World’s Fastest Gamer.

WTF1: Thanks for talking to us Darren, we’re here for World’s Fastest Gamer. Tell us a bit about it and what’s been going on today?

Darren Cox: “So this is one of the six qualifying events we have got, we’re basing this one on rFactor 2. It’s probably the most difficult one to qualify from, I would suggest. We’ve basically set up a studio in the F1 ‘Wing’ at Silverstone.

“If you look around here, we’ve built a studio. McLaren have sent cars down, we have got simulators, we have press coming down to look at it. We just want to take it to the next level, to show that this is genuinely somewhere that people can make a living, for a start, not only the racers but also the people commentating, and see where we go from here.

“Like all of the projects I have been involved in, we are trying to push the genre on a bit, do the next thing – whatever it might be. Clearly broadcasting and content is going to be huge for online racing.”

WTF1: Where did the idea come from, are you a sim racer yourself? What inspired you?

DC: “I would love to say I am a sim racer, but I am just a bit rubbish at it, to be honest. But, with the small amount of racing I have done recently, I always use the simulator first. In terms of gaming, I am old, so I was Gran Turismo, the first one, and arcades. All of that kind of stuff.

“I know all about that, but my background, I was involved in the GT Academy for 10 years and that went well, I guess. I left Nissan, started my own business and the forecast was to do about 25% of what we were doing in gaming. But the phone kept ringing and it was people asking about gaming, so in the end we were doing around 80% on the gaming side. In the land of the blind, the one-eyed man is king. So, I’m the one-eyed man, everyone wants to get into it.

“For World’s Fastest Gamer, I have been working for a number of different groups on their strategies. We were working on our own IP in the background and it just seemed obvious. The restrictions of what we had for GT Academy was one platform and one manufacturer.

“World’s Fastest Gamer, we are everywhere, even mobile, Gear.Club for example. We had 550,000 downloads of that game, we had 60,000 people turn laps trying to qualify. These are big numbers. The great thing about that is you don’t have to have a fast broadband connection, a £4,000 PC, a £2,000 set of pedals and steering wheel. It’s really accessible. But also, to make it credible, we have rFactor 2 and iRacing championships to take the top guys forward to the McLaren final.

“But, this is very different. These guys want to stay in the virtual world, they don’t necessarily want to race cars. So, we have moved the genre on again and hopefully with this, we’re moving the quality up as well.”

WTF1: We’re definitely impressed with the set-up, it feels like a proper TV studio…

DC: “Absolutely, and we’ve got a commentary booth, the guys have got live timing, replay ability. We’ve got directors for the race, in terms of the content, but we also have people sitting there doing stewarding and being race directors. We have had penalties.

“Racing online, whatever automatic stewarding people put into their games, at this level you need stewards. I have seen a lot of online competitions and all of them are blighted by bad driving and no stewarding. People are scared to give people penalties. Not here. We have a proper race director, series coordinator. And one thing we’ve said to the racers is, McLaren are watching, from this moment on.”

WTF1: On the final, we haven’t heard too many details about it, can you give us some extra information on what people will be getting up to?

DC: “There will be a lot of virtual racing at the McLaren Technology Centre. We have a really cool concept of how we are going to do that, so wait and see. It will be across multiple platforms, as obviously it isn’t fair if we just use one platform.

“The guys will also drive real McLaren cars on track, they’ll be in the McLaren simulator, fitness assessments and we’ve got PR tests. That sort of thing. It’s genuinely an interview. I won’t be involved in the decision, it will be the McLaren sim team and the executives at McLaren choosing someone.

“Because it really is a proper job, they’ll be paid to work at McLaren, have a badge, scan in every morning and go drive the sim. You could argue, would you rather be a racing driver with an opportunity to maybe get on, which was GT Academy, or this one which is, you actually get a job, a flat in Woking and a desk at the best facility in motorsport.”

WTF1: Absolutely crazy. And they get to drive McLarens, where will they be racing?

DC: “It won’t be Silverstone, we have a nice surprise venue for that!”

WTF1: A lot to look forward to, then! Thank you, Darren. 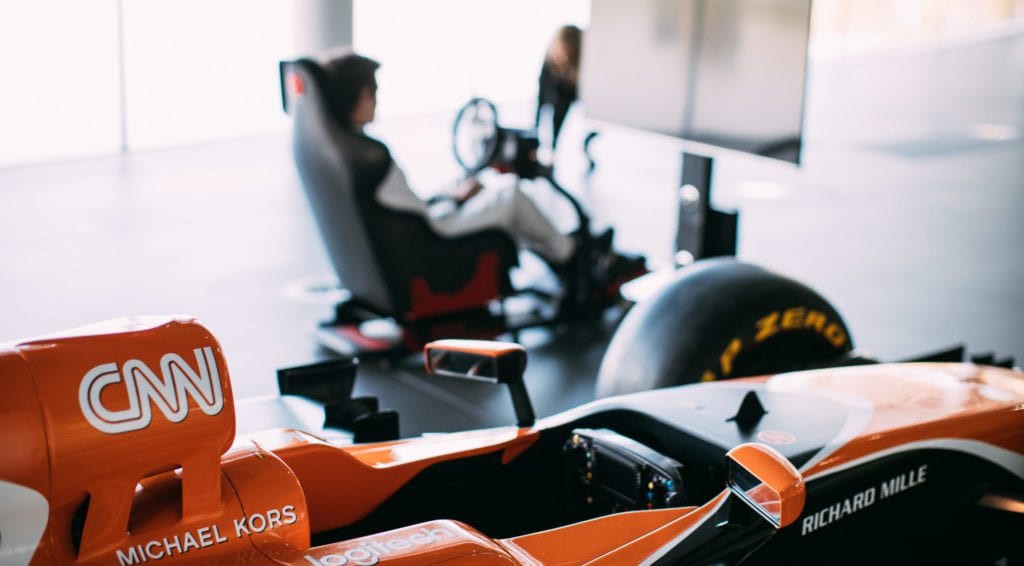