What Are The Best Comebacks In Motorsport? – WTF1
Skip to content
×
Feature , Formula 1 , Opinion

Everyone loves a good comeback story. Thanks to the incredible work on safety in our sport over the past few decades, drivers are now able to walk away and return to racing from potentially fatal accidents. This article looks back at the phenomenal comebacks we’ve seen from drivers in motorsport.

With Romain Grosjean and Juan Manuel Correa recently announcing their comeback to racing after their respective crashes, we looked at six other remarkable recoveries.

Niki Lauda is possibly the greatest comeback of them all.

Lauda was always known for his colossal talent on-track and his no-nonsense approach off-track. After clinching his first world championship in 1975, the world appeared to be Lauda’s oyster until an accident at the Nurburgring the following year that almost cost him his life.

During the 1976 German Grand Prix – an event Lauda had already tried to boycott over safety fears – he crashed his Ferrari into a barrier. The car burst into flames with Lauda trapped in the burning wreckage. Other drivers arrived at the scene to help pull him out of the fire, but Lauda had already suffered severe burns to his head and inhaled toxic gases that significantly damaged his blood and lungs.

Although conscious during the accident, he later fell into a coma. His injuries were so serious, Lauda was even given the last rites in hospital. Everybody assumed the worst, but he pulled through making an incredible recovery.

In the end, Lauda missed just two races and was back for the Italian Grand Prix only six weeks later. Although ‘petrified’ to use his own words, he finished the race in fourth and fought through the pain and discomfort to return to the sport he loved.

Inspirational doesn’t even come close to describing Lauda’s return to racing. One of the all-time greats, who would go on to win another two world titles in 1977 and 1984.

During the 2009 Hungarian Grand Prix weekend, Ferrari driver Felipe Massa was struck by a suspension spring that had come loose from Rubens Barrichello’s Brawn. The impact, which happened at one of the high-speed parts of the circuit, knocked Massa unconscious behind the wheel instantly and saw him plough into a nearby tyre barrier after being unable to stop.

Massa was airlifted to a hospital where he was diagnosed with a skull fracture and needed immediate surgery above his left eye. Although his condition was first described as “life-threatening but stable”, he quickly improved and was released from the Budapest hospital a week later.

Whilst recovering from the accident, it was decided that Massa required a metal plate in his skull. He missed the remainder of the season, with Ferrari finding several replacements over the year. Massa did return to F1 that year, waving the chequered flag at the 2009 Brazilian Grand Prix and after passing lots of examinations by the FIA allowed him to test a 2007 F1 car to get himself accustomed behind the wheel.

He came back to racing for the first race of 2010, managing to finish in 2nd place in his very first race back after his accident.

Robert Kubica should probably be on this list twice. He suffered two almighty crashes during his racing career but still managed to find a way back and continue with his passion.

The first of the two was during the 2007 Canadian Grand Prix when Kubica was the victim of a massive 75G crash. His car caught the Toyota of Jarno Trulli, hit a lump of grass and ploughed into the concrete retaining wall at an estimated speed of 186.49mph.

His car bounced off the wall, barrel-rolled across the circuit, and into a heap outside the nearby hairpin. Kubica’s feet were visible at the bottom of his BMW Sauber, and it was initially feared he had broken a leg in the accident. This wasn’t the case, and Kubica was transferred to a local hospital where he remained conscious and in “stable” condition.

It was confirmed Kubica sprained his ankle and had a slight concussion and missed the 2007 United States Grand Prix as a precaution; giving Sebastian Vettel his F1 debut. Kubica returned for the French Grand Prix a race later and finished fourth.

By 2011, Kubica was one of F1’s top talents but during the winter break, Kubica was almost killed in a crash during the small Ronde di Andora rally. He was trapped in his rally car for more than an hour after a crash barrier had pierced through it. As a result of the crash, Kubica had to have a partial amputation to his forearm plus suffering fractures across his body and lost a large amount of blood.

After countless surgeries, he was released from the hospital over two months to start the rehabilitation process. Renault had already found a replacement in Kubica’s place, and it seemed the F1 dream was over when he announced he wasn’t fit enough to compete in 2012. Kubica even told the media years later he was scheduled to race with Ferrari for the 2012 season. Heartbreaking.

Kubica did return to F1 though in 2019 with Williams Racing. He finished the German Grand Prix in tenth, making him the last driver to score a championship point for the team.

Back in 1995, during the season finale weekend, Mika Hakkinen experienced a tyre failure during qualifying. His car became airborne and made a big impact with the nearby tyre barrier at around 120 mph – the fastest part of the Adelaide circuit.

Hakkinen suffered a skull fracture, a blockage of his airways and significant internal bleeding. Fortunately, the trackside team responded quickly and performed an emergency cricothyroidotomy which undoubtedly saved his life.

He was transported to an extremely close hospital where he remained in critical condition and looked after by a trauma expert team. Mika remained at the hospital for two months and made incredible progress during his recovery.

Being at the end of the season, the injury didn’t result in Hakkinen missing any races, and he was able to race again when the season started in Australia for the 1996 season. He would go on to win the drivers’ title in 1998 and 1999.

After Alex Zanardi’s F1 career in the 1990s that saw him start 41 Grand Prix, he headed to the CART Championship series. In 2001 during a race at the EuroSpeedway Lausitz, Zanardi suffered a crash whilst leading in the final few laps.

As a result of a late pitstop and being on cold tyres, Zanardi lost control of his car and hit another driver. This accident cut the front of Zanardi’s car off. Immediate medical assistance helped save his life, but Zanardi had lost 75% of his blood volume and both his legs – one at the knee and the other at his thigh.

Determined to race again, Zanardi designed and built his custom prosthetics and by 2003 was allowed to race again with the help of hand-operated accelerator and brake controls. He went back to the race track where he lost his legs and completed the 13 laps he never finished. Zanardi returned to racing in the 2003 European Touring Car Championship at Monza where he finished seventh.

During his time in the World Touring Car Championship, he won several races and was also allowed to drive an F1 car again in 2006 testing for BMW Sauber.

Away from racing, Zanardi is a highly successful para-cyclist and has won numerous Olympic gold medals and world championships. A true legend and a hero to many.

At just 17-years-old, Billy Monger suffered a heavy crash when he drove into the back of a stationary car on track at high speed around Donington during a British F4 race. As a result of this crash, both Billy’s legs had to be amputated below the knee.

His story was shared worldwide, with many drivers showing their support to the young and promising talent that looked to have his career cut short.

However, Monger was determined to get back racing and made his return to the racetrack when he tested an adapted Fun Cup race car by disabled motorsport specialists Team BRIT. This special event happened at Brands Hatch, where Monger would regain his race licence.

Since his crash, Monger has driven in the BRDC British Formula 3 Championship and Euroformula Open Championship. His incredible story was captured in the moving BBC documentary Driven: The Billy Monger Story.

With honourable mentions going to Juan Manuel Fangio, Ari Vatanen and A.J. Foyt to name just a few, who do you think has the best comeback of all time? Let us know in the comments below. 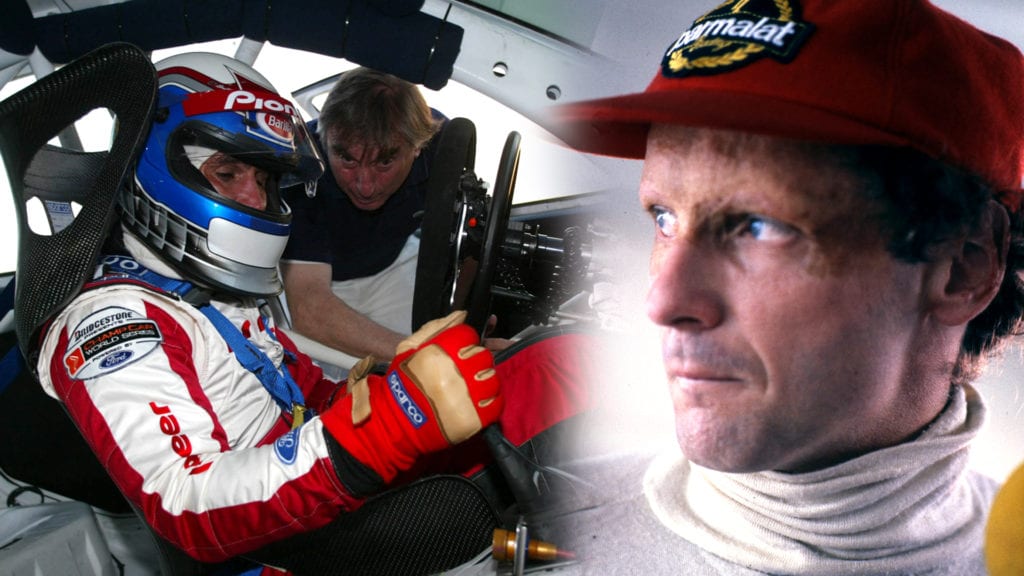