What On Earth Was That Formula E Race!? – WTF1
Skip to content
×
Formula E

What On Earth Was That Formula E Race!?

Multiple drivers remained in the title fight going into the first race of the New York double-header but realistically, it was going to be between Vergne and Lucas di Grassi. With both having a tough qualifying session, all Vergne pretty much had to do was not allow di Grassi to outscore him by four points.

However, through a series of increasingly unlikely and spectacular events, the title is going down to the final race. Trying to explain through letters and words would not only leave my brain in a frazzled and tangled mess, but probably take longer to read than it would to just watch the entirety of the damn race back. Instead, here’s a dump of highlights of some of the key moments.

AND WE GO GREEN in New York City! Will this race start define the championship? • • • #ABBFormulaE #NYCEPrix #motorsports #racing #NewYork

At this point, things were already madly brilliant. Sebastien Buemi had dominated up front, Evans found himself in second, and Antonio Felix da Costa made his way up to third.

Championship-wise, heading into the final lap, we still didn’t know quite what was going to happen. Vergne had scrambled his way into the points and held the bonus point for fastest lap, di Grassi was in the top six, and Bird was somewhere in the points with a 10-second penalty to add into the equation which may or may not have resulted in Vergne winning the championship once everything had shaken out.

Then, on the last lap, Vergne tried a move on Felipe Massa. It did not end well.

CARNAGE as @jeanericvergne and @massafelipe19 come together, collecting several other cars. WHAT A RACE. WHAT A CHAMPIONSHIP. • • • #ABBFormulaE #NYCEPrix #racing #motorsport #crash

Vergne dropped out of the points while di Grassi ended up fifth, taking the championship to the final day. Not only that, but strong results from Buemi and Evans keep them in the hunt too – here are the championship standings heading into the last race tomorrow:

With 29 points available per race (25 for a win, three for pole, one for fastest lap), the ball is still very much in JEV’s court as all his rivals will have to win and hope for a no (or very low) score for Vergne. It seems impossible, but Buemi made up 29 points on Vergne today alone – who’s to say it might not happen again? Especially as the qualifying system is likely to leave the protagonists somewhere in the midfield…

The Best Formula E race ever? It was probably a bit too chaotic for that tag. But for sheer action, drama, and entertainment, you’ll be hard pressed to beat it. 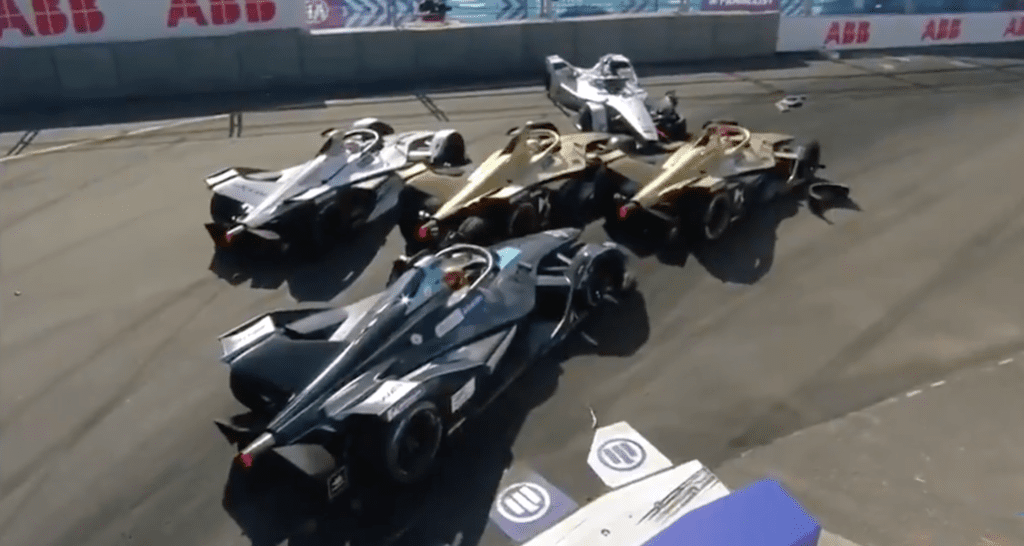