What Rules Would Drivers Come Up With If They Were In Charge Of F1? – WTF1
Skip to content
×
Formula 1 , Fun

What Rules Would Drivers Come Up With If They Were In Charge Of F1?

There’s an important announcement coming up this weekend with Liberty Media setting out its vision of the sport from 2021 onwards. During Thursday’s driver press conference, questions of this nature were met with little comment from the drivers and it made us wonder what F1 would look like if some drivers could introduce new regulations…

Regulation 1.64B: – All media banned from the pit lane and a heavily regulated, state broadcast channel to be introduced. No more hypothetical or speculative questions. F1 State TV will be permitted to ask one driver one question over the entire weekend. Press conference time to be spent instead to give drivers time to go to the toilet and miss Pele, or perform karaoke.

Regulation BW0.4H: – Alongside the usual pit stops, drivers will be permitted to make a brief ice cream stop at half-distance. This will provide a four-minute window that allows drivers to get vital fluids, sugar, dairy, hazelnut chunks and/or strawberry sauce on board.

Regulation 6.X÷35%of5: – Number two driver status to be outlawed. It is now illegal for teams to surprise one of their drivers mid-race with a strategy call that screws them over.

Regulation A.U55.1: – In-demand drivers are permitted to take on multi-team contracts during the season. If a driver is good enough, they are permitted to drive for all of the top three teams as and when they want to.

Regulation L.U1z: – Formula 1 drivers will receive up to 25 championship points at the final race of the year if they successfully carried a decent nickname with them for the entire season. A bonus point is also awarded at each race for the most entertaining radio message. Previous winners include “I like ‘em vulnerable”.

Regulation D1.V3R53: – Fernando Alonso permitted to change the racing calendar of any series so that he can go racing every day of the week. From a Tuesday afternoon scrap with Manuel Maldonado and Jamie Chadwick in British F3 to a Wednesday morning BTCC battle with the WSR boys, all in time for a round of drinks at the Winchester for the mid-week race reports to blow over before heading up to FP1 on the Friday. Only Alonso is permitted to do this on his journey to attaining the status of “complete driver”.

Regulation K4R.M4: – Formula 1 must adhere to the spiritual laws of karma. Drivers must practice meditation and discuss the karmic essence of all of their actions. “Driver standings” will now become “driver lotus flower position” because it’s a much more comfortable format.

Regulation M3.M3: – The official F1 meme championship will be launched in conjunction with the normal championships. At the end of the year, all the memes will be collected and counted, and the driver present in the most memes gains 25 extra points. Drivers purposefully doing memeful activities in order to become memefied will be disqualified.

Regulation B.FL4G: – Track marshals will no longer use blue flags and will instead be equipped with anti-kinetic suspension stun guns that cryofreeze backmarkers in their tracks. This will make the front runners job much easier when lapping other cars.

Regulation GR.4Z.13: – F1 to be rebranded as Formula Uno in a bid to make the sport more stereotypically Italian. Those fluent in the language are encouraged to use it as much as possible. Those not familiar with the language must struggle and get better. Those who can’t even read a Pizza Express menu with conviction will be permanently banned from all Formula Uno activities.

Regulation H.0N: – A new dry tyre compound will be introduced to the championship using groundbreaking technology. The ‘Honestlysoft’ tyre compound is made up of ‘smart rubber’ that reacts to the biosignatures that the driver gives off. At the peak of frustration in the cockpit, if the driver is in distress, the compound releases 25 per cent more grip. The Honestlysoft is a Ferrari-exclusive compound, so can only be used by Ferrari and on the rears of the Haas.

Regulation HU.G – Points will be awarded for being a gent. Hugging deflated pit stop crew members scores 10 points. If the driver causes an F1 commentator to get a lump in their throat, 87 points may be awarded to the driver.

Regulation C0.0K – Drivers must bring their own food to work. Whilst catering will continue to sustain the wider team, drivers must cook their own sustenance. Ainsley Harriott to be revealed as the FIA’s official culinary judge. Undercooked or burnt attempts at lunch will warrant a five-place grid penalty at the judge’s discretion.

Regulation W0.0f – All F1 reporters and 20 per cent of track-side fan population to be replaced by dogs of all breeds. British Bulldogs in attendance to receive FIA accreditation and the license to conduct podium interviews, although Will Buxton is allowed to stay because he’s nice.

Regulation P.1 – Points awarded for pole position, one point for every tenth of the margin back to second place. 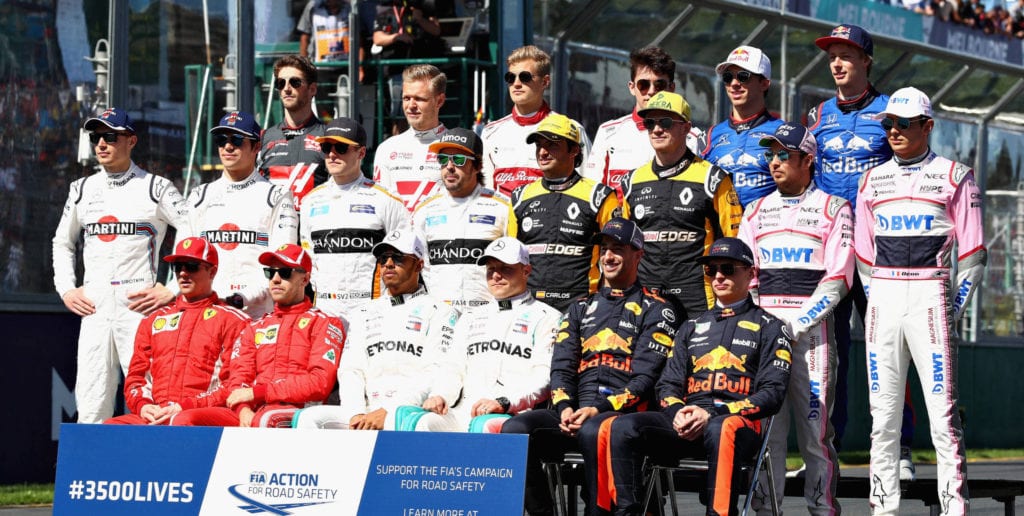