Our jaws fully dropped when we witnessed THAT standing start. Lewis Hamilton started in second, and seemed to pass Sergio Perez for the lead of the race with just two laps to go. That was until he didn’t actually make Turn 1 and threw away a potential victory. Oh, and generated a whole bunch of ‘see you again’ memes.

It’s very rare to see Lewis Hamilton make a ‘mistake’; if you can call this that. Yes, we’ve seen him misjudge things like in Imola earlier this year, but generally he’s a very reliable pair of hands. His seven world titles can tell you that alone.

However, today a blunder from Hamilton cost him a victory, or at least lost him vital points in the championship. Although the reason for Hamilton’s failure to stop wasn’t deliberate, Hamilton has confessed to it being an accidental error on his side.

After the race, it became clear that Hamilton had accidentally knocked a ‘magic button’ on his steering wheel. It sounds strange and almost made up, but it’s a real toggle that exists to move the car’s brake balance forward.

You’ll find that it’s used to generate tyre temperatures on things like formation laps, preparation laps in practice and qualifying or behind the safety car. To get proper nerdy, ‘brake magic’ heats up the brakes quicker by altering the hybrid regen and brake bias settings, as explained by technical guru Craig Scarborough.

Just to add, it's been pointed out, he had turned it off, but had knocked it back on before T1.

If you look back through the last few years, talk of this “magic button” has always been there. From a team radio conversation between Peter Bonnington and Lewis Hamilton during the 2015 Monaco Grand Prix and Hamilton being told to “cancel the brake magic” to George Russell discussing it after the 2020 Sakhir Grand Prix.

“I went long because they’ve also got a magic button which moves the brake balance forwards, and what you do for the safety car. And it was such a late call that I forgot to turn it off,” Russell explained after his one-off Mercedes outing last season.

So, why was the ‘brake magic’ tampered with before the standing start after the red flag during the Azerbaijan Grand Prix? Simply put, Hamilton didn’t even realise he’d done it.

“I had no idea I’d even touched it,” Hamilton explained to SkySportsF1 after the race.

“It’s quite a humbling experience to be honest. We’d worked so hard this weekend to come back from out of the top 10. It was looking so good.

“I’d put everything on the line, I’d fought as hard as I could today.

“On that restart I think when Checo moved over towards me I clipped a switch. I just went straight.

“It’s very hard to take. But I’m mostly just really sorry to the men and women in the team who’ve worked so hard for these points.”

It’s a very sobering reality, especially as the mistake has brought an end to Hamilton’s 54-race scoring streak. The last time Lewis failed to score any points in a race was when he retired from the 2018 Austrian Grand Prix, and this was the first time Lewis finished a race without any points since the 2013 Spanish Grand Prix. Crazy stats.

As for these toggles, they’re actually a really commonly used part of an F1 steering wheel. Mercedes give their settings the nickname the ‘magic button’ for the preset toggles but each team will probably have their own settings for when the toggle is switched on or off.

To give a handy explanation, a very young and shy Lando Norris talked through the use of toggles in an old McLaren video.

“Basically to go up would be off, down would be all of these changes to the setting that you want.”

So for Mercedes, their ‘magic’ toggle brings the brake balance forwards.

Today was a humbling experience. We worked so hard to put ourselves back in the top 10 today after a rocky week here in Baku. We gave it our all today and a small error caused the brakes to switch off. Sorry to the team, we’ll come back stronger for the next race 🙏🏾 pic.twitter.com/oHy75S07L3

As Hamilton already explained, it appears that as Sergio Perez moved over, he accidentally clipped the switch which is why he flew forward into the nearby escape road and failed to make the turn. The switch caused only the front brakes to work which I think caught all of us off guard.

In the end, Hamilton finished 15th.

Overall, it’s just proof that these steering wheels are a complicated bit of kit. 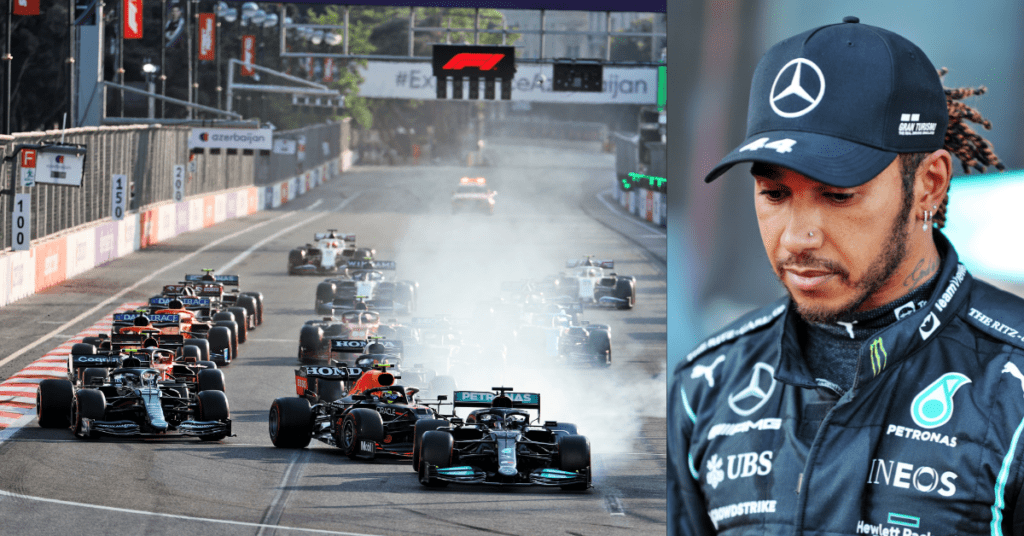