When Mika Hakkinen Retired From The Lead On The Last Lap Of The Spanish Grand Prix – WTF1
Skip to content
×
Formula 1 , Retro

Mika Hakkinen was something of an expert at the Circuit de Catalunya. He’d won there in 1998, 1999 and 2000 and despite a rough start to his 2001 season, he was looking set to add a fourth Spanish Grand Prix victory to his CV.

Michael Schumacher had led from pole but Hakkinen shadowed him all the way, and after the second stops he took the lead. Schumacher meanwhile had uncharacteristically settled for second as he was concerned about a vibration.

Hakkinen was absolutely on it though. As he began the last lap he’d lapped everyone except for Schumacher and looked set to take his first win of the season in dominant fashion. But then…

It was all over. His clutch had pretty much exploded and although he tried to coast around the car was done, and he pulled off, just half a lap away from home.

Schumacher eventually came through to win from Juan Pablo Montoya, who scored his first podium, and Jacques Villeneuve, who scored BARs first podium. But even Schumacher was somewhat embarassed to win under the circumstances, saying that he was sorry for Mika and that he’d been “bloody lucky”.

The rest of Hakkinen’s season wasn’t especially great, despite wins at Silverstone and Indianapolis. He announced that he was taking a sabbatical from F1 at the end of the year and he still hasn’t returned from it. 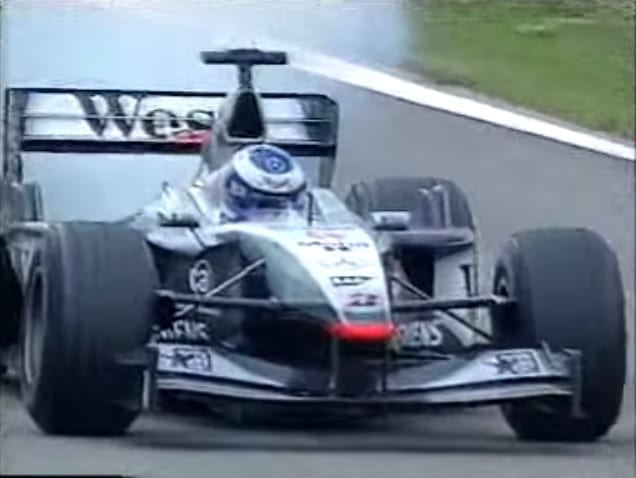