When Raikkonen Lost A Win Because His Suspension Failed On The Last Lap – WTF1
Skip to content
×
Crash , Formula 1 , Retro

It was a race Raikkonen should easily have won but for an error made whilst lapping the Sauber of Jacques Villeneuve. Kimi suffered an enormous lock-up, flat-spotting his front-right tyre at just gone half-distance.

In any other year, he’d simply have had it changed at his next pit stop, but 2005 was the year where drivers weren’t allowed to change tyres so Kimi had to live with it for the rest of the race. Although it didn’t affect his lap times too badly initially, towards the end of the race everything started vibrating rather badly and Fernando Alonso started taking chunks of time out of the McLaren driver. Starting the last lap the gap was just 1.5 seconds and it looked as though we could see a last-lap pass for the lead, but then, this happened.

The vibrations from the tyre had become so severe that the suspension broke, sending Kimi spinning out of the race.

Although changing tyres for performance reasons wasn’t permitted, changing them for safety reasons was. Should Kimi and McLaren have pitted for a new tyre, losing the win to title rival Alonso, but guaranteeing some solid points? Or were they right to stay out and try for the win, despite the risk?

Whatever you think, there’s little doubt as to which option was the most dramatic… 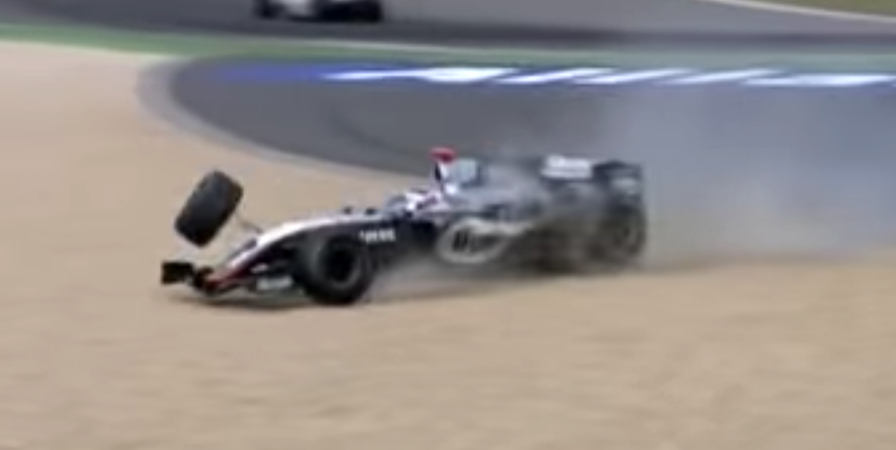