Where Are The Red Bull Juniors Now? Part 2

In the second part of this series, we look back at some of the other drivers who have been a part of the Red Bull Junior Team since its inception and answer the question, where are they now? Got any others you think we should feature, let us know in the comments below.

For many, Antonio Felix da Costa is the one that got away. Although he often reassures the media that he’s on good terms with Red Bull, many believe that they let the promising and talented Portuguese driver down big time. It seemed almost inevitable that he would find himself in F1 with their help, but no such luck.

Having aced in his junior career, including a victory around the iconic Macau Grand Prix, Red Bull brought da Costa into the Junior Team to replace Lewis Williamson in Formula Renault 3.5 in 2012. Williamson hadn’t managed to score any points in the last three races; however, da Costa went on to win the four of the next five races in the same car. Seriously impressive stuff.

He won Macau again in 2012 and earned himself a place in the Young Driver Test with Red Bull later that year. Everything seemed to be going well. Nevertheless, things began to crumble the following year.

In 2013, da Costa returned to Formula Renault 3.5 but didn’t have quite the same success. He finished the season third, behind the McLaren-backed duo of Stoffel Vandoorne and Kevin Magnussen. It was also suggested that Da Costa would be rewarded with a few Friday practice sessions with Toro Rosso during the 2013 season, with the end goal being a Toro Rosso drive in 2014. Neither of these ever materialised.

In late 2013, Antonio received the phone call that nobody on the Red Bull Junior Team wants. Dr Helmet Marko, an advisor at Red Bull, told da Costa that his seat in Toro Rosso ‘wasn’t available anymore’ and he wouldn’t make it to F1. Red Bull was instead promoting Daniil Kvyat and moving da Costa away from single-seaters to DTM. Ouch.

He remained a Red Bull reserve in 2014, alongside racing in DTM and the new and emerging Formula E championship. However, da Costa left the Red Bull family in 2015 but still received Red Bull’s backing in 2016.

Da Costa told The Race that “[Red Bull] hated Formula E”. That was their loss though, as da Costa would win the Formula E drivers’ championship in 2020 and cement himself as one of the standout talents in the extremely competitive field.

Pierre Gasly is one of the most known members of the junior programme and is still a part of the Red Bull family to this day. Gasly was first supported by Red Bull when he entered the GP2 championship, a series he would win in 2016.

The following year, Gasly had a rather unusual racing season. He started 2017 in the Japanese Super Formula, then covered for Sebastien Buemi in a one-off Formula E race before finally making his F1 debut at the Malaysian Grand Prix replacing Daniil Kvyat.

He competed in the Japanese Grand Prix too, but was forced to miss the US Grand Prix due to an existing commitment to Super Formula. After a close title fight between Gasly and Hiroaki Ishiura, the final two races were cancelled due to a typhoon and Pierre lost the Super Formula championship by half a point. A double-blow for Pierre, who also turned down an F1 opportunity for two races that didn’t even happen.

Gasly did return for the final three races of the season, partnering another newbie Brendon Hartley due to Sainz’s departure and Kvyat being dropped from his seat. Hartley and Gasly remained as teammates until the end of the 2018 season until Pierre was promoted to Red Bull Racing.

He remained at the top team alongside Verstappen for just half a season, with Red Bull demoting him back to Toro Rosso after only twelve races. Determined to show Red Bull they made a mistake, he managed to pull out some incredible performances such as a second place at the 2019 Brazilian Grand Prix and taking his maiden win at the 2020 Italian Grand Prix.

He will remain with AlphaTauri, previously Toro Rosso, for another season in 2021.

Buemi joined the junior programme back in 2005 and was the official test and reserve driver for Red Bull before his promotion to a full-time F1 seat with Toro Rosso in 2009.

He competed in three consecutive seasons with Toro Rosso alongside teammates Sebastien Bourdais and Jamie Alguersuari. Still, he was ultimately dropped by the team ahead of the 2012 season as they favoured a new pairing of Jean-Eric Vergne and Daniel Ricciardo.

That wasn’t the end of Buemi’s relationship with Red Bull though. He remained on their books, becoming their test and reserve driver from 2012 onwards whilst balancing a racing career in the World Endurance Championship and Le Mans 24 Hours. Buemi also found success in Formula E, becoming the drivers’ champion in 2015–16 and is often hailed as one of the most successful drivers in the championship’s history.

He has now won three FIA drivers’ championships, one with Formula E and two in WEC. He continued his role as test and reserve driver with Red Bull in 2020 for a tenth season and even took part in the ‘young drivers’ test for the team at the end of the year.

Born in Canada, Robert Wickens was another driver who had an impressive junior career.

Wickens was competing in Formula BMW USA when Red Bull scouted him out and with their help transferred him to another team on the grid, which saw him crowned the 2006 Formula BMW champion as a result. Wickens then relocated to the Champ Car Atlantic for Red Bull/Team Forsythe the following year in which he finished third in the drivers’ standings.

He was then runner-up in the relaunched FIA Formula Two Championship (different to the F2 we know now) in 2009 but was ultimately dropped by Red Bull shortly after.

After losing his Red Bull support, Wickens competed in the GP3 Championship and won the Formula Renault 3.5 Series in 2011 whilst balancing the role of test driver for the Marussia Virgin Racing team. He then headed to DTM and stayed there for six years before heading back to single-seaters in 2018 with IndyCar.

His time in Indy proved to be prosperous with Wickens almost winning his first race. However, his racing career was brought to an abrupt halt after a horrific accident at Pocono left him paraplegic. He often documents his progress online, and we wish him all the best with his recovery journey.

Don’t forget to check out part one, which is available here. 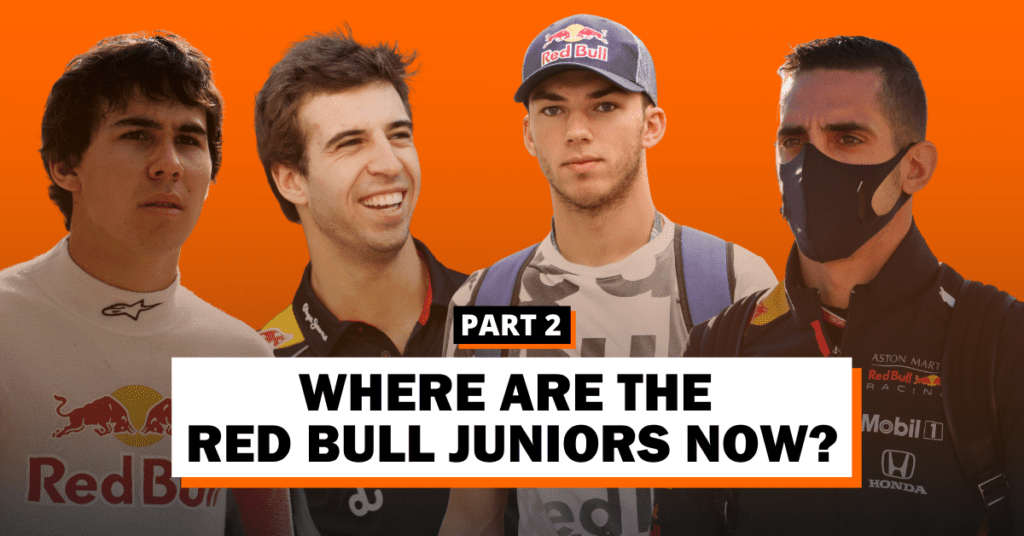