With the ever-growing concern about Alexander Albon’s performance at Red Bull, many of us fans are beginning to question whether Albon is the correct person for the seat. Should the team look elsewhere for 2021, or just hold tight and give Alex a chance?

Here at WTF1, we have compiled a list of the most likely candidates for the Red Bull seat next year, and with your help on social media looked at the pros and cons for each.

The big fan favourite. Could Hülkenberg be Hülken-back-for-good? You guys certainly hope so. In each poll, the WTF1 team have run, or in every comments section, it is clear that ‘The Hulk’ is everyone’s favourite to partner Max Verstappen next year.

He’s been a phenomenal substitute at Racing Point this year, replacing both Sergio Pérez for COVID and Lance Stroll for when he couldn’t get off the toilet. Hülkenberg has displayed both amazing potential and miracle performances considering how little time he has been able to spend in the car and even prepare for a race weekend. Just think of those G-Forces on your neck with no regular training – yikes!

With 179 F1 starts to his name, Hülkenberg also has years of experience in F1. The pairing of Nico and Max would be a driver dynamic of a younger and more experienced duo – something Red Bull haven’t had since Max and Daniel Ricciardo were teammates in 2018. Instead, Red Bull has recently favoured a younger driver pairing, but this is clearly not working for them.

However, are we just hyping up Hülkenberg more than we should? After all, he does hold the record for the most races started without a podium and has been offered several opportunities at a podium finish before crashing or bottling it. Is wanting Nico back the equivalent of remembering a past memory better than it ever was? Has he had his chance?

He is generally a safe pair of hands though, building up a great deal of experience during his time in F1. Of course, he is also a Le Mans winner and had a hugely successful junior career before he joined F1 in 2010.

Without a doubt, one of the most consistent drivers on the grid. Due to things out of his control, Pérez is now left without a race seat for 2021 and obviously keen to evaluate every opportunity. He has incredible talent and always been a shining star, securing surprise podiums throughout his F1 career.

‘Checo’ also brings quite a sum of money with him thanks to a great deal of sponsorship, which could come in very handy for Red Bull who are now having to find themselves a new power unit supplier for 2022 after Honda’s shock exit. Whether that money is used to help buy them a power unit from someone else on the grid, or indeed buy the intellectual property and facilities Honda once owned, the signing of the Mexican certainly won’t hurt Red Bull’s bank balance.

Of course, it should be noted that Pérez is not just a useful cash injection. His skill and ability behind the wheel saw him labelled as a big star of the future when he first joined F1 back in 2011, with many believing he would go on to be a future Ferrari driver until he left the Ferrari Driver Academy in 2012.

In the last 17 races (excluding a retirement in Singapore last year and missing both events at Silverstone due to having COVID-19), Pérez has consistently finished every race in the points. He is also currently sat in fifth in the drivers’ standings, despite missing two races. Some seriously impressive stats.

With Hülkenberg and Pérez being teammates at Sahara Force India F1 Team together from 2014 until 2016, you could even compare the results when the two were in the same machinery. In their first year together, it was ‘The Hulk’ who came out on top with 96 championship points to Checo’s 59. However, the following two years Checo beat his teammate with 78 points to Hulk’s 58 in 2015, and 101 points compared to 72 for Hülkenberg.

Ah, Alex. Where do we start with young Alex?

Having been promoted into the Red Bull circus after Pierre Gasly lost his seat, Albon has clearly struggled in a team which is so heavily built around his teammate Max Verstappen. Unfortunately, Red Bull is currently seen as the only real team who can compete with Mercedes for victory and with Max fighting close to the front, Albon’s race results are incredibly disappointing.

With a field of experienced F1 drivers without race seats for next year, it seems like a no brainer to ditch Albon entirely and get in a reliable pair of hands to bring in results and big points for the team.

However, with such a chaotic couple of years for Red Bull perhaps now is the time to invest in some stability. After Ricciardo’s shock move to Renault which Red Bull were not expecting, as well as switching power unit suppliers to Honda and then demoting Gasly, is now the time for them to consider a period of consistency within the team?

Besides, dropping Albon will bring with it the inevitable “Red Bull are bastards” comments when they bin off yet another young and promising talent and effectively crush their racing career. Red Bull already has a reputation for being a poisoned chalice, and with their young junior programme becoming more of a death sentence than an amazing opportunity, they need to plan their next moves carefully.

But should someone who is unquestionably underperforming be kept in a seat just to help keep the consistency? Red Bull need results, not a nice guy who is ‘trying their best’.

Pierre appears in such a good place at the moment, both on-track but mentally too. We all know the struggles he has gone through and being so publicly ditched by Red Bull took a knock on his confidence, but now at AlphaTauri he seems so much happier and is performing to the best of his ability as a result – including taking his maiden F1 win earlier this year.

A move to Red Bull might seem tempting, to be in a better car than he is at the moment, but I think with the news of Honda’s withdrawal from F1 at the end of 2021, Gasly will want a more secure future. Perhaps a relocating to a certain French team who recently found themselves on an F1 podium for the first time in years? Sounds like an appealing opportunity to me.

Now, for some of your suggestions on social media!

“K-MAG. He’ll put up at real fight with Max and the rest of top 6. The HAAS car isn’t good enough for him.” – Tommy Østerlund Mortensen on Facebook.

“Hulkenberg. He’s been due a car to match his talent for years. Plus, he’s proven this year just how good he is coming in at short notice and producing mega drives. Have him on a one year rolling contract, if he does well keep him on, if not, an experiment worth trying.” – @MichaelGrimwoo5 on Twitter.

“Unfortunately, I am not available next year.” – Giedo van der Garde on Instagram. Nice try Giedo.

“My heart says Albon, but my head says Hulkenberg or Perez.” – @connor.nor on Instagram.

“Gasly was promoted too soon. Dropping back down to Alpha Tauri has rejuvenated his career and he looks way more ready for the step up now than he did in 2018. I’d swap them back and hope it does the same for Albon, who’s floundering badly.” – @mntgmrybrwn on Twitter.

Who would you pick for the Red Bull seat in 2021? Head to @wtf1official on Instagram and vote for your pick in our stories. 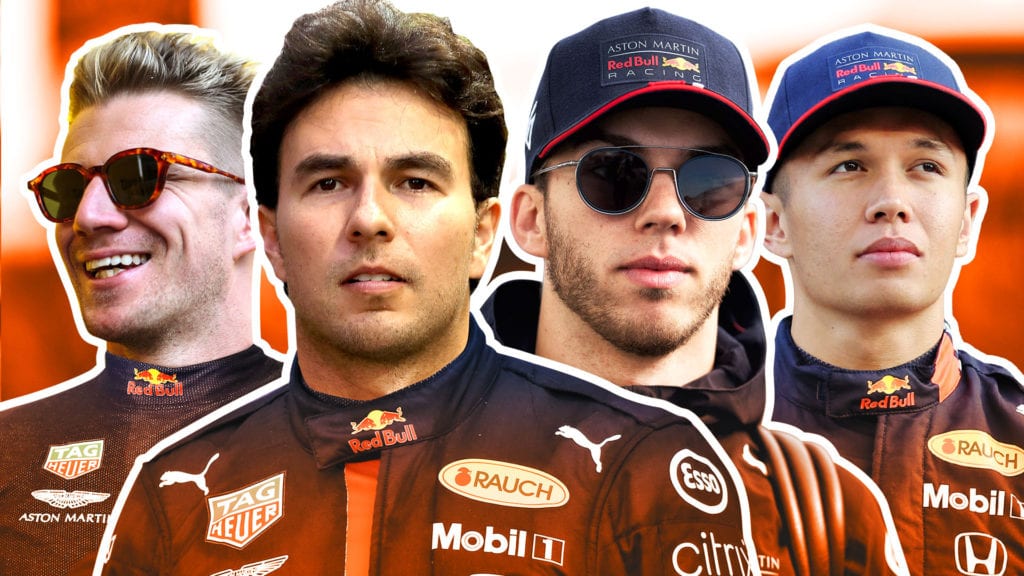