Who Should Replace Vettel At Ferrari Next Year? – WTF1
Skip to content
×
Formula 1

Who Should Replace Vettel At Ferrari Next Year?

The announcement that Vettel and Ferrari will split at the end of the year came as something of a surprise as it seemed that both sides wanted to reach a new deal. Whatever the true reasons are for that not happening, Ferrari now has the unenviable task of trying to find someone who can replace a four-time world champion and, in terms of race wins, the third most successful driver in the history of the sport.

With the phones at Maranello now presumably ringing off the hook, we wondered which drivers might be on the other end of the line and in with a genuine shout of becoming Ferrari’s next Formula 1 driver.

When Ricciardo announced he was leaving Red Bull in the summer of 2018, the belief was that it was because he had a drive with Ferrari lined up. For whatever reason, that didn’t happen, and he ended up making the shock switch to Renault.

Since then, it’s been rumoured that although a deal couldn’t be done in 2018, Ferrari does have an option on Ricciardo’s services for the future, and that the Aussie has a clause in his Renault contract that would allow him to leave for Ferrari. If you wanted to speculate (which we do, obviously) you could imagine that Vettel vetoed Ricciardo – the man who trounced him at Red Bull in 2014 – becoming his teammate two years ago. Now that Vettel’s gone, the obstacle to Danny Ric wearing red is gone, and he can make the switch back to a front-running team.

He’d certainly be a good fit. Although it took him a few races to adapt to the Renault, it wasn’t long before he was pulling off results and driving with the same verve and vigour we saw in his Red Bull days, comfortably seeing off Nico Hulkenberg. With multiple race wins and plenty of experience, he’s exactly the type of driver Ferrari likes to plump for.

Carlos Sainz has always been an immensely talented F1 driver – albeit one whose career so far has been beset by unfortunate timing. He was bloody close to Max Verstappen’s pace at Toro Rosso during their time as teammates and, were it not for the Dutchman’s mercurial once-in-a-generation talent (or the rumoured rift that developed between the two families), Sainz would surely already be a Red Bull driver.

Sainz’s performance at McLaren last year, where he beat both partial Red Bull drivers, finished with close to double the points of the next midfield driver in the championship (which, incidentally, was Ricciardo) was impossible not to be impressed by. But it wasn’t just the fact that he made the most of a good car, it was the way he did it. 20th to third in Brazil was the highlight, but going from 19th to eighth in Austria (a race with no safety cars) was arguably the more impressive drive.

The 25-year-old Spaniard looks increasingly like a driver who’s ready for something more than a midfield car, and reports suggest that he and Ricciardo are the front-runners to get the Ferrari drive.

Giovinazzi may have had a tough opening two-thirds to his 2019 season, but he showed serious improvement towards the end of the year at a time when, unfortunately, the Alfa Romeo lost a bit of competitiveness.

A Ferrari junior driver, Giovinazzi spent much of 2017 and 2018 doing simulator work for Ferrari, a role in which he was highly valued. With Kimi Raikkonen as his teammate, Ferrari has a solid, known benchmark to measure him against and will have a good idea of how he might perform if promoted to the main team.

Unfortunately, if this was the case, I could only envision it being in a short-term, number two role. For all his improvements, Giovinazzi simply hasn’t shown evidence that he would be close to Leclerc’s level. Had the 2020 season continued as normal he may have had a chance to demonstrate his skills on track, but in this unusual situation where silly season is effectively kicking off ahead of the first race of the year, the current lack of racing counts against drivers like Giovinazzi who had an underwhelming 2019.

Bottas’s Mercedes career has been sustained by one-year contract extensions, with his performances constantly under scrutiny. A fearsome force on his day, Bottas’s problem has been consistency across a season and, with George Russell waiting in the wings, Bottas may elect to jump before he’s pushed. The timing of Vettel leaving Ferrari could make this the ideal time to change teams without having to switch to a lesser team.

Bottas could be an attractive proposition for Ferrari, too. Like Ricciardo, he’s an experienced driver with race-winning pedigree and has proved that on his day, he can beat Lewis Hamilton. Bottas would also come with the added bonus of recent knowledge and experience of the team that hasn’t been beaten for six straight seasons, and his no-nonsense attitude – something Ferrari enjoyed for years with Kimi Raikkonen – may prove a welcome breather after the tensions of the Leclerc-Vettel partnership.

Hamilton to Ferrari seems to be a thread of speculation that comes entirely from our desires, rather than any actual desire for Hamilton to leave the team he loves and which had brought him so much success.

Might Hamilton be tempted, now that a seat has opened up? Will the itch of a new challenge be impossible not to scratch? I think it’s hard to imagine, and it would certainly be a shock, but it’s not entirely beyond the realms of possibility.

Fernando still says he has unfinished business with F1, and recently reaffirmed his desire to return to the championship in the future. He said he only wants to come back when the new regulations take effect, but surely the chance to jump straight back into a top car might tempt him to rethink that perspective.

But however much Fernando might want to return to F1, the question is whether the teams want to have him. Alonso will be 39 in 2021 and as good as he is, it’d likely take him a while to get back into the swing of things. Would Ferrari really want to take a risk on that?

Ricciardo and Sainz are being positioned as the two top choices, and its hard to dispute that. Both would be a fine choice – Ricciardo has the benefit of experience and a proven track record, Sainz has age on his side and would likely be a longer-term solution. Personally, I’d give the nod to Sainz, purely because he hasn’t had the chance in a top team yet and that’s something I’d quite like to see.

But I wouldn’t rule out Bottas, either. It wouldn’t necessarily be an exciting or popular choice, but Ferrari may see him as the ideal foil for Leclerc, the best chance at ensuring a harmonious relationship between two strong drivers which is unlikely to descend into a bitter rivalry.

If Ferrari dawdles and other teams rush to lock their drivers into contracts, then Giovinazzi may end up as a back-up option. Hamilton and Alonso? Sadly, they’re closer to fantasy than reality.

Who do you think should replace Vettel at Ferrari? Let us know in the comments. 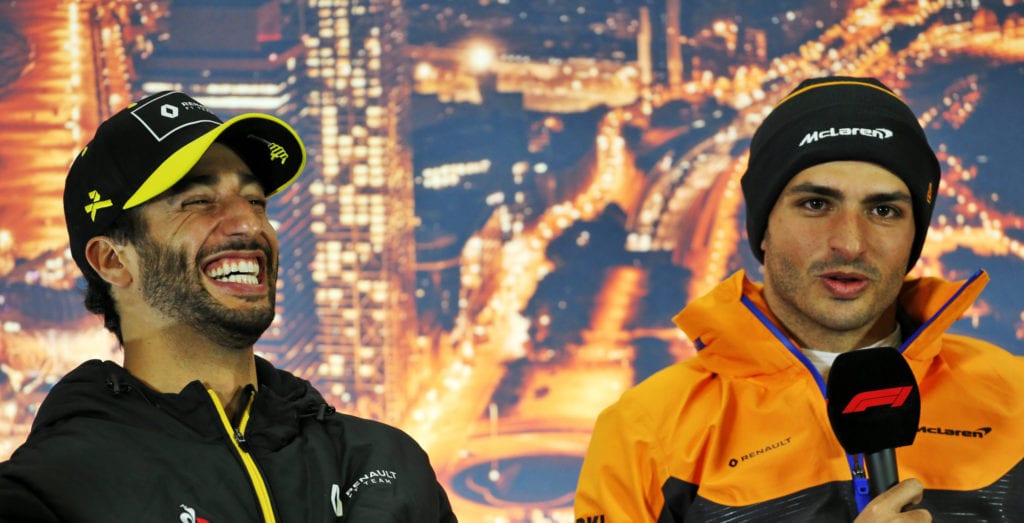