Who Will Be the Next F1 Driver to Win Their First Grand Prix? – WTF1
Skip to content
×
Formula 1 , Opinion

Over halfway into the Turkish Grand Prix, the top three were formed of Stroll, Perez and Albon; none of whom have a Grand Prix victory. Eventually, the win went to Hamilton, but this got us thinking about who the next driver to take their first victory will be?

Firstly, Alexander Albon. Theoretically, he is in the ‘best car’ out of the drivers that we have selected and his teammate Max Verstappen has proven that the Red Bull is a race-winning car this year at the 70th Anniversary Grand Prix around Silverstone.

He has visibly struggled this year, with his best result being a podium at the Tuscan Grand Prix and many believe he could be demoted from Red Bull at the end of the year to their sister team AlphaTauri or even kicked out of F1 entirely.

However, Albon has struggled to perform in his car under pressure. Reports suggested that Albon was given an ultimatum to prove his worth at Red Bull during the Portuguese and Imola Grand Prix weekends, but achieved two of his worse results of the year finishing in 12th and 15th respectively.

He has shown glimpses of something special though, running in the top three and keeping a cool head at the recent Turkish Grand Prix before spinning out of position and eventually finishing race seventh.

If he keeps his seat at Red Bull next year, perhaps he will finally be able to pull everything together and take a victory.

Lance Stroll silenced a lot of critics when he snatched a surprise pole position at the 2020 Turkish Grand Prix. He’s also already had a podium this year at Monza and has scored points in every race he has finished this year except one.

He still has a ‘pay driver’ association with his name, but has continued to demonstrate his talents behind the wheel and will be remaining with the team next year when they rebrand to Aston Martin.

Leading from pole for a majority of the Turkish Grand Prix, damage to the underside of his Racing Point ultimately led to serious tyre graining issues and saw him fall back and finish ninth.

Although the Racing Point cars are not the most competitive team on the grid, they have had a reasonably successful season and sit third in the constructors’ behind Mercedes and Red Bull Racing. Not bad considering that for over 20% of races this year they have had to rely on super-substitute Nico Hulkenberg for points.

Driving for a big name like Aston Martin next year, as well as having a four-time F1 world champion as a teammate, could see Stroll producing some of the best racing of his career and finally secure himself a win.

Lando Norris found himself on the F1 podium for the first time in his career at the very first race of this season, raising all expectations for him and McLaren in 2020. Unfortunately, Norris hasn’t had the same level of success since but has been able to shine in several moments throughout the year.

He has set two fastest laps to his name and continued on a steady point haul to be one of the most impressive drivers of the season with three races to go. As well as being quick on the pace, he has been involved in several spicy overtaking manoeuvres and established himself as a promising all-round driver.

Next year, Norris will be pushed even further with Mercedes engines in the back of the McLarens and a feisty new teammate in 7-time Grand Prix winner Daniel Ricciardo. A big amount of pressure will be on his young shoulders, and many believe Norris is up to the challenge.

Perhaps with the addition of Mercedes-power and the ever-improving McLaren, Norris could be the next driver to secure his maiden F1 victory.

He might be seat-less for next season, but if Sergio Perez can locate a drive with a top team like Red Bull Racing then it seems almost inevitable that he will find himself a Grand Prix winner.

Having proved himself ‘one to watch’ in just his second year in F1, securing three podium finishes in his Sauber during the 2012 season, Perez has since been known as a reliable and consistent pair of hands behind the wheel of an F1 car. Since the 2019 Belgian Grand Prix, Perez has earned championship points in every race that he has finished and even managed to get a second place at the recent Turkish Grand Prix. Bonkers.

If Perez gets the Red Bull seat, some believe he will be the biggest challenge Max Verstappen has come across since the departure of Daniel Ricciardo. His future does hang in the balance though, with it seeming more likely Red Bull will retain Albon and Haas are signing Nikita Mazepin alongside Mick Schumacher.

He has the most experience out of the five drivers in this article with 188 race starts to his name, and quite frankly it’s criminal that Perez has not yet found himself at the top spot on that podium.

Although the pace of the Racing Point has had moments of promise, it seems pretty implausible to expect a win from Perez in the remaining three races of the season. 2020 has brought with it many surprises though. Never say never, right?!

With a fresh challenge at Ferrari next year, many believe that Carlos Sainz is the real deal. Although Ferrari has taken a huge hit in their performance this year, there is hope that progress is being made and that a partnership of Leclerc and Sainz will be the breath of fresh air that is needed for the Italian team.

Ferrari has provided at least one win to every full-time driver at the team since Ivan Capelli in 1994, so Sainz will hope that record continues.

He had a victory within touching distance at Monza, almost catching Pierre Gasly on the final laps of the race and being heavily affected by the Red Flag period that helped assist Pierre to his maiden win.

His recent season with McLaren has been successful too, with the podium in Monza and points at most Grand Prix this year. He is currently ahead of his teammate Norris by a single point in the drivers’ standings.

However, if Ferrari continues to struggle as much as they have done this season, could another driver in this article beat Carlos to achieving their first Grand Prix win?

There aren’t too many other drivers that seem in competitive enough machinery to take a maiden win, however, Esteban Ocon could be a wildcard entry. The jump in performance Renault have experienced – even in the last 12 months – has shown that there is big potential there. I mean, crazier things have happened? Who would have predicted Pierre Gasly was the next race winner among the current grid and in an AlphaTauri.

Unfortunately, I don’t think the likes of Russell and Latifi will be ready for the victory in their Williams just yet.

Katy: “With such a promising bunch of young talent, it is hard to pick just one. However, my instincts are telling me that Lando Norris could be a shock winner in a Mercedes-powered McLaren. It all depends if the partnership works out, or if we see a repeat of the horror McLaren-Honda days. He has shown what a mature head he has on young shoulders when behind the wheel.”

Tommy: “This is probably going to age really badly in a couple of weeks if he does indeed get fired, but I think that Alex Albon is going to stay at Red Bull. With Red Bull being the second best team in F1 quite easily now with Ferrari going into the midfield pack, all it takes is another crazy race like Austria or even Turkey for Albon to get a win. Whereas I think drivers like Sainz when he is at Ferrari or Stroll at Aston Martin, they are not going to be in a position to win next year. They are going to have to wait for 2022 before we get a new winner. So, while I don’t think Albon is going to be a world champion or anything like that, I could see him being the next winner of drivers that have not won a race yet.”

Matt: “Next winner for me will be Carlos Sainz. I think Ferrari will get their act together for 2022. I don’t think there will be another winner in 2021, and Carlos will be next F1 winner. He is in incredible form at the moment with McLaren and I think with Ferrari it will be a good combo.”

Who do you think is the next first time winner in F1? Let us know in the comments below. 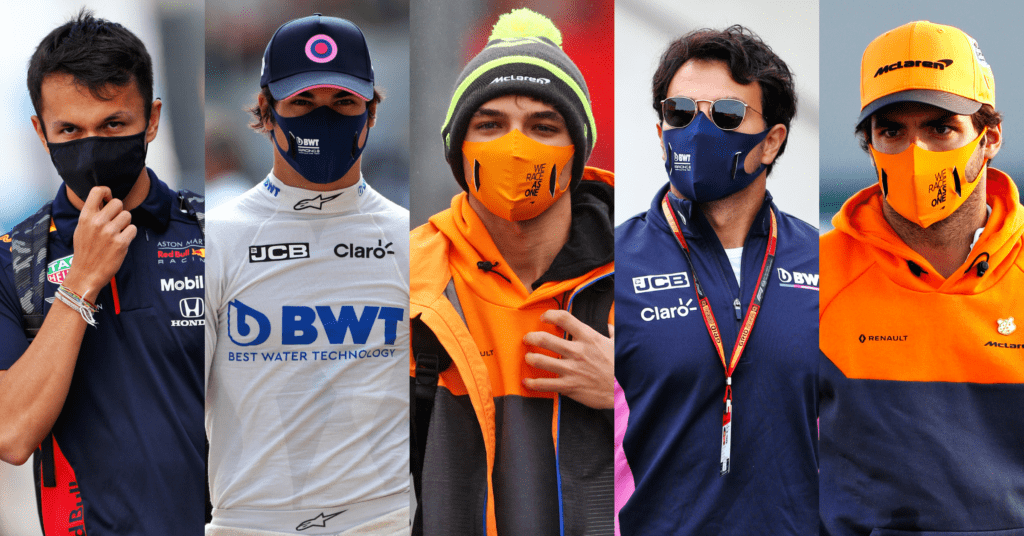