Why F1 Should Scrap The Mandatory Pit Stop Rule

There’s almost a collective sigh of discontent among fans when we hear that predictions are for an easy one-stop race because we know how exactly it’ll go. The top drivers will all start on the same compound, pit at around one-third distance, and then easily go to the end of the race, despite the false promise that the tyres might wear out and necessitate another stop.

Since there are three compounds available on each weekend, one frequently mentioned solution is to force drivers to use all three during the race, turning grands prix from mandatory one-stoppers to mandatory two-stoppers. The argument is that it would shake up the strategies a bit because, generally speaking, the more stops you make, the more room there is for variety.

I don’t think that’d work. With the ‘start on the tyres you set your Q2 lap with’ rule, all strategies would quickly converge on the same solution, and all that would happen with tyres lat last way longer than needed is that teams would simply cover off any undercuts. I’m not saying that multi-stop races are bad (see the brilliant madness of the 2012 season) but they only work when there’s a genuine need for them. And if the tyres degraded badly enough to make multi-stop races more interesting, then there would be no real need to make two stops mandatory, would there?

Instead, F1 needs to go the other way. Remove the mandatory pit stop rule. Make it possible for a driver to go the whole race without stopping. If you also got rid of the rules about starting the race on you Q2 tyres, you could get some genuine mystery and uncertainty between the teams.

Imagine the scene: Lewis Hamilton has taken pole and Sebastian Vettel second. They’re evenly matched on pace, but the race is at a circuit where overtaking isn’t especially easy. The grid is clearing ahead of the warm-up lap and as the mechanics remove the tyre blankets, Hamilton has gone with the hard tyre, anticipating a run to the end. Then Ferrari shows its hand – and Vettel is on the softs.

His aim would be to try and take the lead at the start (or very early on) and build up enough of a gap to make a stop and retain the lead before swapping to the harder tyre. If that didn’t work, he could go for another stint on softs, try and make a move stick, and then try and pull out the gap again. If tyre wear is high, Vettel might need to make another stop for a third set of softs and pass Hamilton again.

Hamilton and Mercedes, meanwhile, would have to decide whether to push hard and try to keep Vettel behind, at the risk of ruining his own tyres, or stick to an easy pace in the confidence the race will come back to them in the later stages.

At the moment, everybody pretty much knows for sure whether a driver is going to have to make another pit stop, something that would only become more obvious with more mandatory stops. The point is that with pit stops merely being optional, nobody would truly know what the other teams and drivers are doing.

Vettel could be sitting in second on mediums, aiming to go the whole distance, with Hamilton a few seconds up the road on softs. Ferrari might be expecting him to pit again, but at two-thirds distance, they realise he’s going to try and make it to the end on softs. Does Vettel push harder to try and pressure Hamilton into using his tyres more? Or does he sit back and hope they drop off, aware that pushing his tyres too hard could trigger problems of his own?

Say Valtteri Bottas is running in fifth place on medium tyres in a close race, while everyone around him his on hards. They know they can get to the end of the race, Bottas thinks he might have to pit. However, the midfield is are closer than anticipated – does hit pit for fresh rubber and hope that he can pass the slower cars quick enough to put the no-stoppers under a bit of pressure to maybe make an unexpected stop? Or does he stay out on mediums, hope that his tyres work better than expected, and aim to make places up at the end of the race?

I could be wrong. Simulation programmes could be so advanced that all teams discover the optimal race with no stops and we get strategy-free processions. But even if that was the case, the surprise of someone throwing on a completely different tyre at the start could throw a proper spanner in the works.

It’s not just uncertainty of what other teams were doing that would be good, either – there’d be a bit more uncertainty over how they tyres would work. We’ve seen how not knowing how the tyres will hold up can make for epic races – just look at how last year’s US GP turned out following a practice washout.

At the moment, teams can get a pretty good idea of tyre life by doing entire stints (or most of a stint) during practice sessions. But running an entire race distance during a practice session? It’d be just about possible, but at the cost of trying out anything else, including making major setup changes. Suddenly, this big risk of tyre strategy comes in to play, where teams would have to commit to one approach and then either stick with an optimised but unfavourable plan, or chance it on a potentially faster strategy with more unknowns.

At the increasingly-hopeful end of the spectrum, it may even start to influence the design direction of the teams. A tyre-loving car will be great in the races, but could prove costly for one lap pace, especially on tracks where tyre warm-up is a problem. Conversely, a car with superb one-lap pace might end up slipping down the order on a Sunday.

The biggest positive for the idea of no-stoppers is that it’s worked for Formula 1 in the past. Leyton House made a car so easy on its tyres that the team almost won the 1990 French GP by making a surprise run to the flag without pitting.

The 1987 British GP – where Nigel Mansell passed Nelson Piquet for the win with just a couple of laps to go – was sensational partly because Mansell needed to pit and Piquet didn’t. During his Lotus days, Ayrton Senna frequently put himself in strong positions by opting not to stop and contributed to one of the closest finishes of all-time, the 1986 Spanish GP.

And for a more recent angle, look at Monaco this year. Yes, everybody stopped early thanks to the safety car, but the excitement came from not knowing whether Hamilton would have to pit again, or whether his tyres would drop off too much. That’s the same situation we’d see more of without mandatory stops.

Now imagine that race if everybody had to pit twice. The excitement would have been over before the celebrity posers had finished their first glass of bubbly. 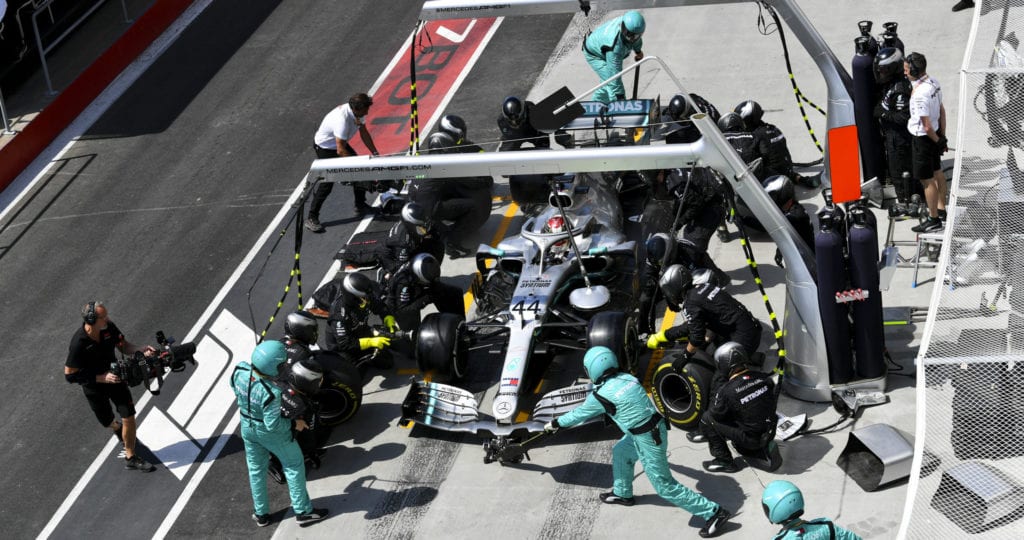