Why Has Red Bull Chosen To Promote Albon Instead Of Kvyat? – WTF1
Skip to content
×
Formula 1 , Opinion

Why Has Red Bull Chosen To Promote Albon Instead Of Kvyat?

Gasly has scored just 63 points to the 181 of his teammate. While Max Verstappen has taken a pole position, two wins and five podiums, Gasly’s best grid slot is a fourth in Germany (a session where both Ferraris had technical issues) and had a single fourth-place in Silverstone, the one weekend where he looked genuinely able to fight with the other top teams.

Finishing behind Carlos Sainz’s McLaren in Hungary on pure pace was the final nail in the coffin for Gasly’s season with Red Bull and it become obvious that if the team had any designs on beating Ferrari to second in the constructors’ championship, it would need to make a change sooner rather than later.

That change has now come, with Albon making the move up to the main team for the Belgian GP while Gasly is sent back to Toro Rosso, away from the spotlight, to try and regain some sort of confidence and form. But why has Red Bull chosen Albon? Because for a number of reason, surely giving Kvyat the gig would have made more sense.

For instance, Kvyat is higher up in the championship. He scored a classy podium in Germany, has had more points-scoring finishes, and beaten him in races more often than not. On top of that, he’s vastly more experienced, with 84 starts compared to Albon’s 12. Kvyat has already raced for the main team and knows the pressures that come with it, as well as having spent a year as a Ferrari sim driver.

In other words, he’s become an incredibly well-rounded driver who’s finally managed to marry a bit of intelligence and consistency to his out-and-out speed. He’d be the ideal person to parachute into a team he knows mid-season and deliver.

The trouble is, Red Bull doesn’t really work like that. The whole point of its young driver programme and Toro Rosso is to find the brightest and best young talents and to get them through the system as quickly and efficiently as possible. A driver is either good enough or they’re not. It’s no good if they can’t perform in the big team now but might be able to in a couple of years, because by that point, another young driver will have come along and jumped them in the queue.

Kvyat himself is a fine example of a driver who lost out to this system – he wasn’t dropped by Red Bull because he crashed into Sebastian Vettel, he was dropped because Max Verstappen was clearly an incredible driver who had to be placed in the senior squad or risk being lost to a rival.

If Red Bull wasn’t so thin on the ground with eligible junior drivers last year, Kvyat (and indeed, Albon) probably wouldn’t have got the nod to drive for Toro Rosso this year. It makes you wonder if Red Bull’s strategy of rapidly pushing through talent is the right one, but that’s another discussion.

Kvyat being a known quantity might, in this case, have actually harmed his chances of being moved up for this year. Albon has been close to pace from pretty much the word go – the qualifying battle is six-all. And yes, Kvyat got the podium in Germany, but for most of that race (namely, the tricky wet parts) Albon was comfortably ahead of him. It was only a well-times switch to slicks that put Kvyat in contention – and that’s not to say that Kvyat’s result was undeserved, it’s just making a point about how results aren’t necessarily everything.

The fact that an inexperienced Albon has been close to Kvyat might lead Red Bull to believe he’s got more room to grow and become even better. Ironically, this is likely a similar reason as to why Kvyat got the Red Bull gig over Jean-Eric Vergne in 2015 – yes, Vergne was pulling in the better results at the time, but Kvyat challenged him enough to make the team feel he was a better investment. Funny how things flip around, isn’t it?

Also, Albon has a fantastic record when it comes to junior formulae. Not in terms of championships, but when it comes to the drivers he’s fought with. In Formula 2 last year (one of the most competitive fields in F2/GP2 history) he battled for the title with George Russell – a guy who’s impressed so much in a Williams that some feel should be promoted to Mercedes ahead of Esteban Ocon – and Lando Norris, despite suffering perhaps more mechanical issues than either of his rivals. And in 2016 he ran his GP3 teammate Charles Leclerc extremely close for the title. He’s doing alright in a Ferrari at the moment – what’s to say Albon won’t be as impressive in a Red Bull?

Additionally, think of how it might look for Red Bull if they promoted Kvyat. He’d been demoted to Toro Rosso, dropped, brought back, dropped again (in a very harsh manner), and then re-signed for 2019. In 2017, Kvyat being demoted (and Verstappen winning every time that happened) was primo meme material. From a PR perspective, giving a driver you’ve previously dropped multiple times another shot at the top wouldn’t come across brilliantly – especially given the number of other young, non-Red Bull drivers who haven’t even had one chance. Yes, Albon was also once cut from the Red Bull programme, but he was only 16 at the time and had done just one year of car racing – quite the difference from Kvyat’s situation.

That’s a pill Red Bull may decide it has to swallow in the future but while it has the opportunity to continue with its practice of pushing the latest young talent forward, that’s the path it’s going to take.

Speaking of the future, think of the swap as less of an ‘evaluating Albon at Red Bull’ situation and more of an ‘evaluating Gasly at Toro Rosso’ deal. With Brendon Hartley as a teammate last year, it’s kinda hard to judge how well he actually performed. There were the odd weekends where he had sensational results (Bahrain, Monaco, Hungary) but a lot of the time, Hartley wasn’t a million miles away from him. Was Hartley better than we thought? Or was Gasly worse? Going up against Kvyat (who as I’ve said before is a known quantity) should provide a clearer picture of his potential, providing it doesn’t take him too long to work out the challenges of driving a different car.

It gives the team a few more options for 2020 as well. If Albon doesn’t perform well and Gasly struggles to recover, Red Bull can almost rely on getting Kvyat to come in as an experienced, fast and reliable driver without having to grab a driver from outside of its own stable of drivers, which would surely be a far more damning indictment of the junior programme than giving Kvyat another shot. If Albon impresses, great, problem solved.

As for Gasly? His position is much more awkward. Anything short of totally destroying Kvyat at Toro Rosso will surely put him at risk of being replaced by the next Red Bull juniors, Pato O’Ward or Juri Vips (providing they can get enough super licence points) and even that, that would raise questions about why he couldn’t perform in the first half of the season.

But these are all discussions that can wait until the end of the season. For now, let’s just get excited about seeing what Albon can do. Opportunities haven’t always come easily for the 23-year-old Thai driver but when he’s had them, invariably, he delivers. Can he do the same now that he has a race-winning car at his disposal? 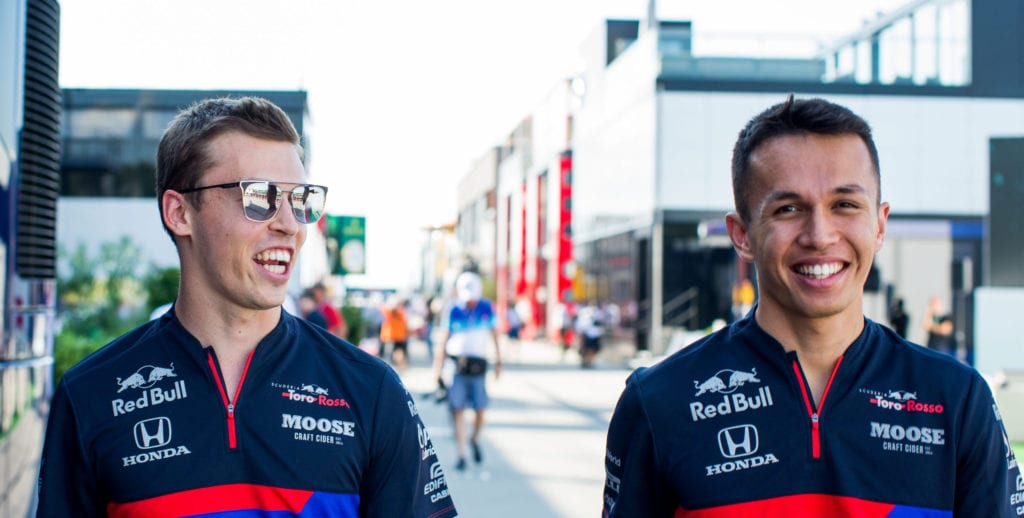