Why Haven’t The Other Midfield Teams Copied Mercedes?

Whether you want to call it the Pink Mercedes or the Tracing Point, the fact is the team have come out of the blocks with a car not only good enough to easily be top of the midfield, but one which is even giving Red Bull a headache.

The RP20 drew plenty of attention during testing – not just because of its pace, but because it bears a very striking resemblance to last year’s championship-winning Mercedes W10. Things looked good at the first race in Austria, too, as although Sergio Perez ‘only’ finished sixth, that doesn’t tell the whole story. Before the race went crazy, Perez was up with the pace of Alex Albon, and even in the later stages, when he was on much older tyres than the cars around him, his lap times were still competitive.

In the Styrian GP, the team arguably looked even stronger. Although the drivers struggled in qualifying, Perez wasted no time in the race as he surged up from 17th to fifth and at one stage was even the fastest car on the track.

The contact with Albon while fighting for fourth dropped him to sixth once more, with Lance Stroll just behind in seventh. The team currently ‘only’ sits fourth in the constructors’ but, given a more normal weekend, you could argue that Racing Point vies with Red Bull for the title of the second fastest car – Christian Horner even said after the race that “everyone should be worried” about the pace of the RP20.

Given that the team uses Mercedes power units and gearbox cases, some rivals have wondered whether there’s anything fishy going on, with the Racing Point and Mercedes sharing more between them than is allowed by the regulations. Renault finally made their suspicions official after the Styrian GP, launching a protest over the design of the cars, which specifically relates to the brake ducts.

Customer cars are not permitted in F1, and there is a strict list of parts which govern what teams are allowed to share between them. Anything on the ‘listed parts’ list must be designed by teams themselves and include things like the bodywork, roll structures, front impact structures and the survival cell. Other ‘non-listed’ components, which include things like power units, gearboxes and brakes can be bought in from other teams or outside suppliers.

Break this rule and the penalties can be harsh. It’s at the core of the Spygate scandal that rocked F1 in 2007, when McLaren effectively stole – and used – in-depth technical information from Ferrari. The result? A $100 million fine and disqualification from the Constructors’ Championship. Ouch.

A small team like Racing Point surely isn’t going to risk something like that, especially when it’s so obvious that the car is based on a Mercedes.

“We’re well within all the regulations. Who better to copy than Mercedes? We took pictures of their car but the design and development were totally our own.”

At this point, it’s probably worth talking about design concepts. Each team has a different idea of how to build the fastest car within the regulations, with one obvious example being the difference between Mercedes and Red Bull. Mercedes generally build a long, low, flat car, while the Red Bull is generally a bit shorter with a much steeper rake angle. Both methods work, but in very different ways.

This extends across all cars in much less obvious ways, from the shape of the sidepods to the tiny winglets on the bargeboards. If you put the front wing from a Mercedes on a Williams, the Williams wouldn’t suddenly get faster. If anything, it would be slower, because the rest of the car was designed to work with the front wing that Williams designed.

Over the past few years, Racing Point/Force India has generally tried to follow Red Bull’s high-rake philosophy. The problem is that, as we’ve mentioned, Racing Point buys a lot of its rear-end components from Mercedes – and they’re not designed for high rake. As a result, past cars were compromised with this mixing of design philosophies.

So, switching to a more Mercedes-like concept makes sense for the team. But to go in so hard on designing a car which so closely resembles the W10 – and having it work – is quite remarkable.

Copying other cars can be a massive risk. In the late 1970s when ground effect was the aero innovation to have, the Lotus 79 and then the Williams FW07 nailed the concept most. Many smaller teams tried to straight-up copy these cars and they were almost all terrible.

More recently, Haas has drawn attention for maximising what it can buy from Ferrari to build its cars. And, aside from a successful 2018, the team has had plenty of struggles with understanding how to make its Ferrari-like package work.

And that’s the key word. Understanding. Anyone can look at pictures and build a copy, but knowing how to make it work is the real skill – and Racing Point looks to have nailed it. Technical Director Andrew Green explained to The Race:

“From the outside, it probably looks like ‘oh, yeah, they’ve just copied the Mercedes. It’s nothing like that. To copy something means nothing unless you understand what you’re doing. Otherwise, it doesn’t work.

“I think we’ve taken a very, very big risk with what we’ve done. It’s not insignificant and the amount of work that has to go into understanding another teams philosophy from the outside looking in is huge.

“I’m proud of everything. To get to where we started from six months ago to doing what we’re doing now is a tremendous effort.”

Deviating from one aero concept to something completely different is a massive commitment – especially as when the RP20 was designed, the new regulations were scheduled to come into place in 2021, meaning it was only going to be effective for one year. In fact, that’s probably what made it a risk worth taking – if it works, then they’ll have a great season. If it doesn’t, they can just suck up a bad season and not worry too much, because everything was going to be completely different the next year anyway.

As it turns out, the rules being delayed until 2022 is a bonus for Racing Point – they now have a decent car for two seasons as many development areas are being frozen for next year in order to keep costs down.

So, it’s proven to be effective and – Renault protest pending – legal. But is it right? Should teams at the pinnacle of motorsport simply copy each other, rather than trying to come up with the entire design themselves? Has Racing Point gone against the DNA of the sport?

Well, parts-sharing has always been a thing in F1 and no season has ever seen a field of completely bespoke cars, so that’s no problem. And teams will always take inspiration from others – if someone finds a trick that’s worth half-a-second a lap, other teams aren’t going to ignore it out of pride. They’ll design their own versions and have some of that advantage for themselves. At what point does inspiration become copying? That’s a grey area that’s probably up to you as an individual to decide.

In terms of what Racing Point has done, the team has made a brave and rather radical decision to completely change its approach to car design. That’s very F1.

Not only that, but the team seems to have succeeded – one of the rare instances of car-copying in F1 that has actually worked. That shows a very talented bunch of engineers and designers which has allowed a small team to punch above its weight. Again, that’s very F1.

It’s also proven so effective that rival teams are questioning its legality. Pushing the envelope with regards to the regulations? Yup, that’s very F1 too.

So, why haven’t the other midfield teams copied Mercedes? It’s probably because they simply hadn’t even considered it. And if they did, it was probably seen as too risky and difficult an option to seriously consider.

Will we see more of it in the future? It’s unlikely. The problem with copying other teams is that even if you get it right, you’re always going to be a year behind what the person you’re copying is doing. Teams with ambitions of being at the front will have to forge their own path.

This season has merely been the perfect storm for the independent and rebuilding Racing Point squad to take a bit of a punt – and it seems to have worked. Now Sergio Perez and Lance Stroll have got to try and make the most of it. 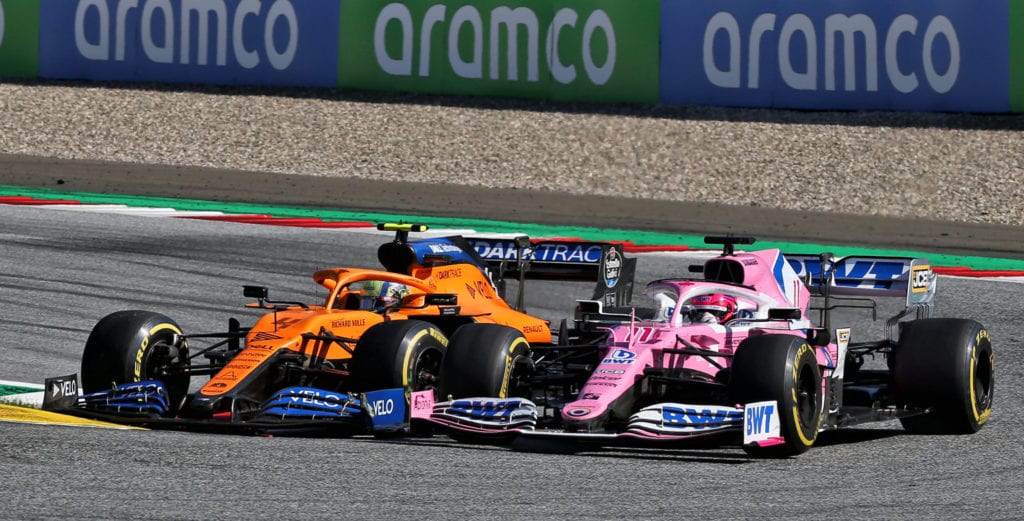