Why Making Overtaking Harder May Have Made F1 Better – WTF1
Skip to content
×
Formula 1 , Opinion

Why Making Overtaking Harder May Have Made F1 Better

Watching a car overtake another car gives us fans a feeling that you can’t quite explain to people who aren’t into motorsport but like everything, too much of it makes it less special.

At the start of the ‘Pirelli era’ we were spoiled with overtake after overtake. In 2011, overtakes shot up from less than 30 per race to a massive 60 per race. Great! Right? Well not exactly.

With the introduction of DRS, drivers found themselves sitting ducks on the straights, the art of defensive driving was completely lost and overtakes went from being incredibly exciting to just a bit ‘meh’.

Sure, there’s been some standout overtakes during that era – Mark Webber on Fernando Alonso into Eau Rouge or Sebastian Vettel going wheel-to-wheel with Alonso at Silverstone. What do these two passes have in common? OK, other than a Red Bull overtaking a Ferrari. Both passes were made without the use of DRS.

When teams revealed their new-look cars for 2017, fans were swooning on social media and the drivers were commenting on how much better they were to drive. But something that also cropped up was worries about overtaking. After all, big wings and lots of aero was ditched in 2009 for the reason that cars weren’t able to run closely.

After this year’s Australian Grand Prix had an amount of overtakes that you could count on one hand, it no longer mattered that the cars looked cool and were setting lap records, what mattered to fans was that the whole sport was ruined and Ross Brawn needed to fix things quickly.

With a one kilometre straight the Chinese Grand Prix usually sees plenty of overtaking but normally they’re the kind of slam-dunk DRS passes that most fans completely loathe. That wasn’t the case this year though with 54 overtakes during the race and just 10 of them DRS.

The race in Shanghai proved that you don’t need overtaking every single lap and if anything, it makes it more special when the pass does happen.

Take the battle between Daniel Ricciardo, Kimi Raikkonen and Sebastian Vettel. The Ferrari is clearly much faster than the Red Bull at this stage of the season and ordinarily both red cars could have breezed by the Aussie in the DRS zone and the battle would have been over in two laps tops.

Instead, the three of them were locked together for well over ten laps and when the passes did come, boy were they good.

Vettel’s wheel-banging move on Ricciardo will still be being replayed in ten or fifteen years and each time it’ll be just as awesome to watch.

In China we saw drivers having to brake late and make lunges rather than taking the easy way by with DRS and it was BRILLIANT.

It’s moments like that that makes you jump out your seat and punch the air. No one would have been doing that during Valtteri Bottas’ DRS flyby on Fernando Alonso… well there would have been punching but from a frustrated Alonso and into the wall of his motorhome.

Give me a couple of quality overtakes like Vettel’s or Romain Grosjean’s in a race over 20 or 30 DRS passes anyday.

If the races continue to be as good as Shanghai then we’re in for an absolutely epic season and that’s before we even get the fact that the two most successful drivers of this era might be in for a season long battle for the title.

Do you think the new cars will provide better racing? Let us know in the comments 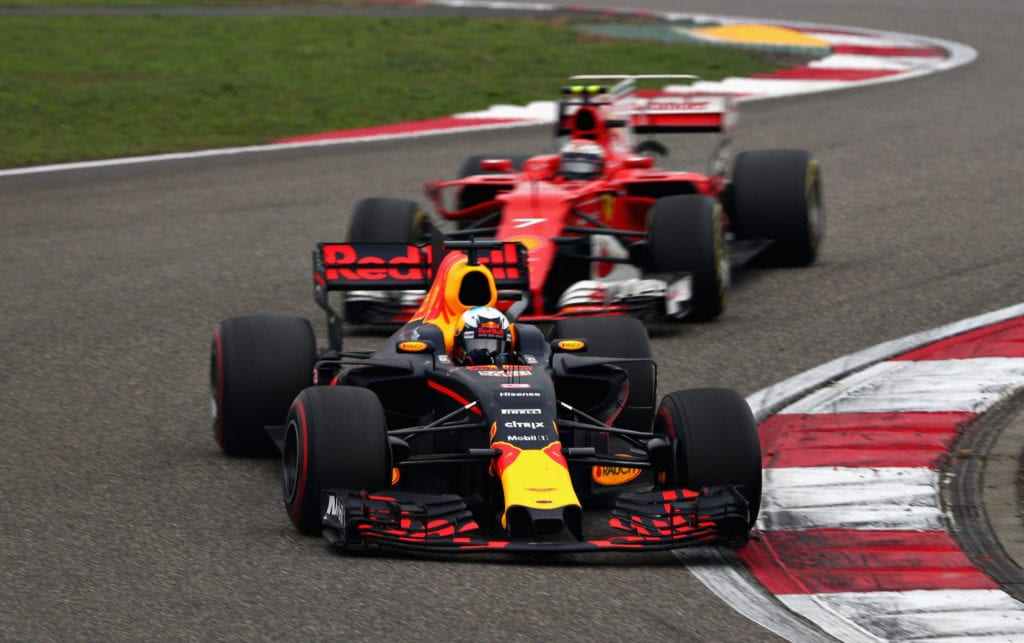