Williams Has Said There Will Be “Serious Financial Implications” Following The Baku Drain Incident – WTF1
Skip to content
×
Formula 1 , News

Russell’s car was so badly damaged by the strange goings on during FP1 that the team is having to build a second chassis. That means Russell won’t run in FP2, either, leaving him just an hour of preparation time heading into qualifying – hardly an ideal situation, even if in his case it’s only realistically going to make it harder for him to qualify 19th instead of 20th.

As well as the lost track time, it means Williams has to dive into its box of spare parts, which wasn’t the most full to begin with. While damage from accidents is to be expected, seeing a car get damaged by a fault with the race track itself isn’t something any team will account for and, understandably, Claire Williams isn’t happy about it. She told Autosport:

“I think that when you send a car out on a race track that you should have the understanding that your car is not going to be damaged by that race track in that way. I’m incredibly annoyed about it, clearly. The most important thing is that George is OK, and that it didn’t cause what could potentially have been a bigger accident. We have to ask the FIA and FOM to ensure that it doesn’t happen, and protect against it in the future.

“And for us as an independent team there are serious financial implications of this. We’d just taken the pressure out of the system and got ourselves back on an even keel. The chassis is split, and we have to revert to chassis 03.

She continued to say that it wasn’t just the chassis that was damaged either, with the energy recovery systems also taking a hit:

“We’re going to lose this afternoon’s running, and we’re potentially going to have to replace the ERS pack, which has again implications. It’s just not OK. We had the same here in 2016 with Valtteri, coming into the pit lane I think it was. It wasn’t as serious, but it was pretty significant.”

When a similar thing happened to Romain Grosjean in practice for the 2017 Malaysian GP, Haas was able to claim compensation from the circuit. Williams suggested the team would go down a similar route, saying, “I think that those are conversations that will happen”.

As well as the implications for Williams, it’s also rather upsetting that this sort of thing happens as regularly as it does – especially on street circuits, where checks to make sure drain covers are properly secured should be at their most thorough. 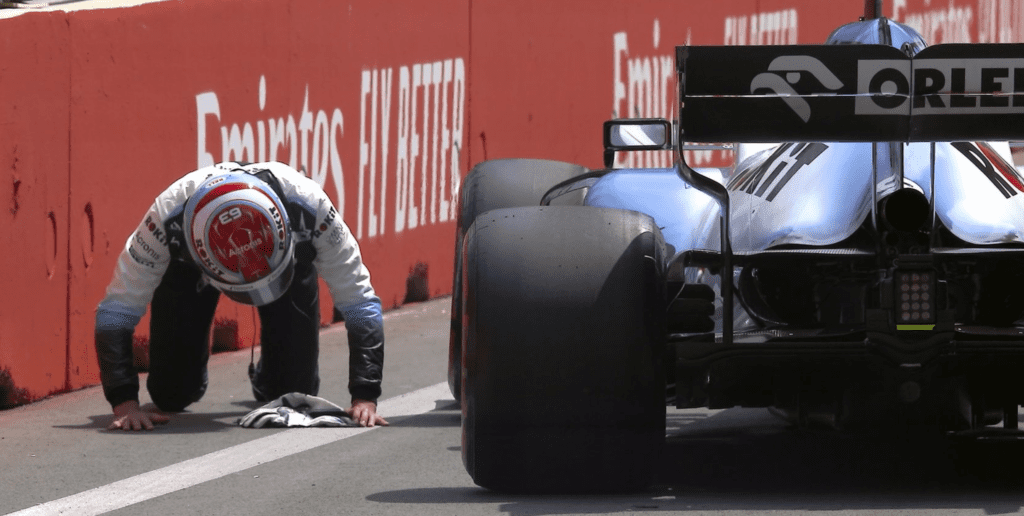